I noticed this week’s Smackdown episode wasn’t available on Wednesday, as it usually is, but a few tabs over, there were highlights available. I opened a chat with a Hulu rep, and they told me that this week’s episode wouldn’t be made available, but next week’s would. When I looked on Reddit, I noticed a bunch of others were having this problem. Is this how desperate they are to get people to watch Raw? (sarcasm intended)

Anyone else having this issue? 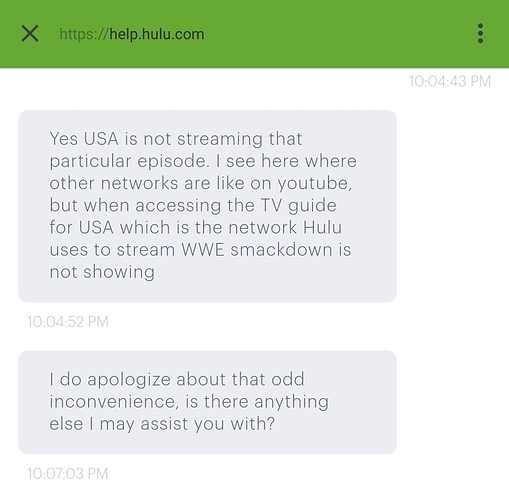 Woah, are you saying WWE is intending this to happen?

I dunno. Its confusing to me, I haven’t seen them take down an episode before, so this still seems to be either a choice to pull by the WWE, or a database issue for some Hulu subscribers. Some Reddit users were saying it’s availability was based on device, but even those users have updated to say it’s no longer available, so it seems more likely that it was intentionally pulled by someone.

I wonder if it’s available internationally?