NOTE: The New Japan Cup will start on March 8th. Just wanna get a heads start for our predictions.

Gonna start a thread here for those watching the New Japan Cup soon. Pick who will be your winner for the tournament and will eventually face for the IWGP title on G1 Supercard.

My pick to win is Kota Ibushi. They’re going to want the winner strong for MSG and Ibushi/Naito 1st round jumps out for that reason. Tana is in same corner of bracket, which allows Kota to avenge G1. Plus if he wins you can do Ibushi/White plus Okada/Tana or Okada/Naito.

March 10th certainly looks the pick of the bunch.

I don’t think Juice Robinson will win it but I think he should be one of the ones that you would really wanna shine up in this tournament.

I watched the night 1 honor rising show, Kevin Kelly was giving hints that maybe Okada or Tanahashi could challenge jay lethal for the roh title later on down the road.

Yeah, it feels like Ibushi has to win it all, right?

You can’t go back to Okada that quickly, it’s not going to be Tanahashi again, Ospreay has a shot at the Anniversary show and no one else in the fields feels important enough to headline MSG. Naito is literally the only other option, but I think as long as he has the IC belt, he’ll have a program.

My final four is Ishii/Okada, Ibushi/Sanada, with Ibushi going over Okada in the final.

But. I’d love to see Taichi win it all just to see everyone’s head explode.

When/if do you see them going back to Ospreay vs Ibushi out of interest?

I was thinking Ospreay at first but then they announced his match with Jay White. Now I’m thinking Ibushi wins the cup but loses to White.

Dominion, let it build up slowly, allow Ospreay and Ibushi rack up wins and set up the rematch then.

My prediction is the winner of Naito/Ibushi will win the cup this year.

That would be one hell of a match.

Looks like biggest and beat new Japan cup on history.

WrestleKingdom 14 in the main event

If the title match is main eventing the MSG show, my guess is probably going to be Okada. Hold on!! Is MJfromNJ going to be at this event? I change my pick to Taichi, with his new claw, versus Jay White.

If Taichi and Yoshi Hashi have prominent spots on the card I am going to revolt.

The two most useless people (IMO)

Awesome! Hope you have a great time. Anyone in particular you do want to see?

…and the group who is definitely not going to be there

bought the tickets before all of this was happening and didn’t go to All In in part because I splurged and bought some of the best seats in the house for the Garden which is “down the street” from where I live and where I grew up going my whole life as a 90s Knicks fan and concert goer.

Kinda wished they had an actual bracket out… not saying that a bunch of us would try to attempt to make a perfect New Japan Cup bracket.

I know! I want to organize a bracket pool but I have no idea the second rounds 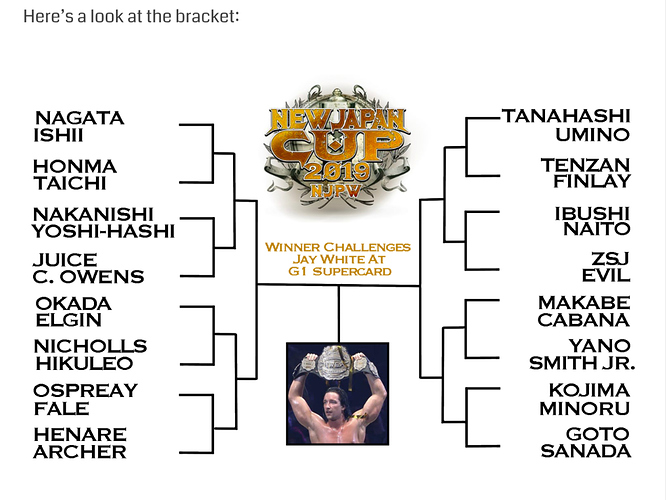 Ibushi gets his win back. Will keeps his title.

Thanks for the brackets.

Hey @Jonnieskull do we know if that’s official? If so I’ll start a thread for a pool.

Those brackets i got were from ProWrestling.com i just double checked again on wiki and there the same so yeah looks like we’re good to go

We have an official prediction contest going if any of you are interested: https://www.postwrestling.com/njcup/

Be sure to include your name under “Prediction Title” if you want us to read it on air.