Last 8 minutes or so are quite surreal

Adam Cole is sick of Pat McAfee's constant insults.  Cole was an unadvertised guest on today's episode of the Pat McAfee Show and while the show started off on the right foot, things quickly got heated after McAfee took a few sly digs at the...

Wow McAfee is such a dick.

I’m not going to listen because 8 minutes of scumbag ex-Barstool contributors is 8 minutes more than I’m willing to contribute.

But, I’m curious. After reading the headline - this obviously is a storyline. The only reason I bother to ask is because everyone online seems to be taking it way too serious.

Probably just getting ready to push the next story along for Cole.

I don’t watch Mcafee enough to know how he is on his show normally. That said what is the storyline with him being a dick to Cole? I think at most it is a work to draw eyes to Mcafee’s show. I don’t see any legs for it on NXT

Total work but well performed by everyone. I think we’re getting Cole vs McAfee on Takeover

Rather have Cole v that other knob jockey Rosenberg

That would suck I have no interest in a Cole vs desk jockey match.

You can use it on NXT. Adam Cole is probably going to go on a downward spiral, so I assume this was the kickstart.

Cosplay HBK needs something to do

And it’s the worst version of HBK at that… the late-94/early-95 Shawn who was still a heel but doing everything he could to look cool and get a babyface pop.

People actually think this isn’t a work? This was very much Adam Cole in wrestling mode, started talking in his promo voice. He’s usually the complete opposite of being serious at all.

It was out of character for the show.

Adam Cole just issued an apology on Twitter. Weird to do if its a work. Maybe it was an impromptu work? 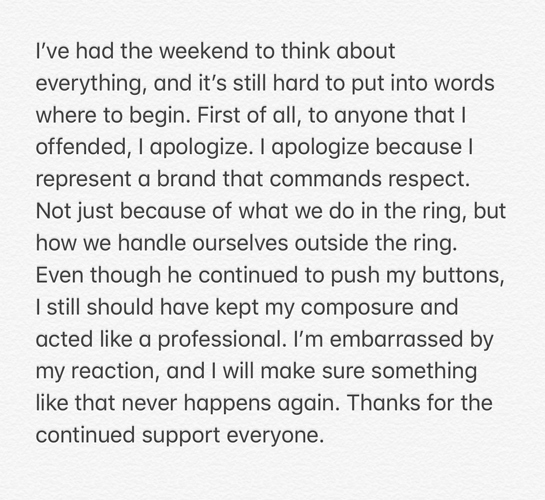 I get the feeling it was a work, Adam Cole doesn’t peg me as a guy who loses his cool like that outside of kayfabe.

I really hope this isn’t a path where they start breaking up Undisputed Era. I barely keep track of WWE anymore but I do very much enjoy UE, and the chemistry they all have together. Cole is great as a faction leader and while they have done what they can do in NXT if WWE were smart they could push UE like Nexus was meant to be pushed and we could see an amazing fresh faction on the main roster pushing merch like crazy.

I can’t believe a week removed people still think this is somehow real.

I guess they’re doing their job.

I dont think its real, I just think its weird to even do this. My guess is that it was an impromptu work (like Lawler/Kauffman) and someone got pissed about it and now their backtracking.

If this was the plan from the start, it doesn’t make sense to even do it. Having a heel apologize within the context of kayfabe is counterintuitive.

Maybe he apologized to make it feel like more of a shoot. Some wrestlers have engaged in worked shoots and worked feuds on social media in the past. Traditional kayfabe and the traditional heel/face dynamic is dead, and you have to find new ways to generate a buzz and get people talking and questioning if certain things are real. The fact that this was posted here, and people are talking about this means they’ve done their job.

If Adam Cole was a no name, and now we were talking about him, agreed. But he’s been the #1 guy in NXT for about a year now, I dont think doing this increases his stock at all. I have no issue with it, its just odd.

What are the chances of them positioning him as a face with a chip on his shoulder? Who goes into the main roster with something to prove, and this interaction with McAfee is for him to start the turn? I mean he blows up (that is the heel) he apologizes (that is the slight face turn)

Maybe I am giving WWE creative too much credit, but could it be possible?