It’s a pretty good presentation so far and Tony Schivone makes a ton of difference; I didn’t realize how much I would enjoy him.

Sammy G took a sweet Disaster Kick as good as anyone I’ve seen with Cody.

The crowd is hot which I think is a big factor to keep an audience.

I agree that Tony has been a positive. He also looks better than he did in wcw.

I’m flipping back and forth and hate to say it but nxt had a better start tonight.

Yeah, i agree, the energy on the announce team is a nice positive. Feels like a good vibe. I’ll be much happier a few shows in when the nerves settle and everyone hits their groove!

So far… this is a bit confusing in terms of tone. I hope they take a lot of notes, and figure out what works and what doesn’t. My feeling so far is that I’ll be watching NXT first, AEW second. But I’m looking forward to when there’s some story lines set up.

The ending just changed everything lol, I’m loving what they did there. Overall it was a solid night.

Man, guys gonna learn how to come back from a commercial break. Why in hell are they focusing on empty seats.

Somebody start an NXT thread! Not watching yet, will watch later.

Pentagon is SO over. If you are watching for the first time tonight he seems like the can’t miss guy to tune in for.

Man, guys gonna learn how to come back from a commercial break. Why in hell are they focusing on empty se

Yep thought the same thing. It’s been a good show though

This is kinda boring. That opening Coty match put me to sleep

Page and Pac had a real feud going and they blew this match off on TV which makes me thing they have different plans now for each. The match lacks all the heat I’d have expected after their DoN feud

Well I mean NXT clearly opened hot to grab the Audience no way AEW could compete with that especially given their card.

This is kinda boring. That opening Coty match put me to sleep

Not the best choice for an opener 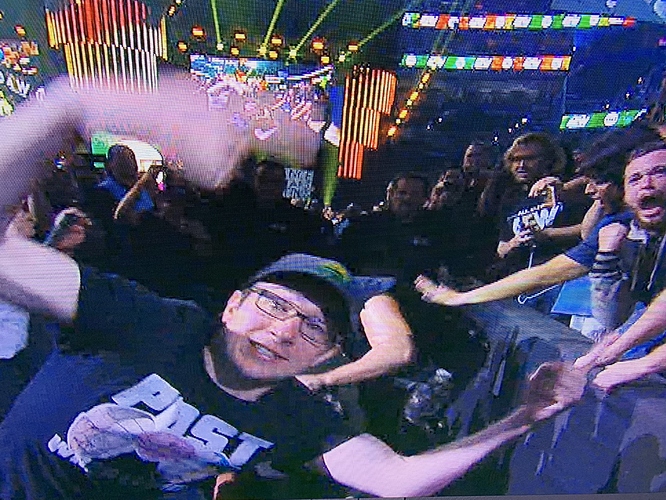 Main Event has gone off the rails. Why didn’t the Ref throw it out?

Holy Moxley shattering the glass something

Incredible. Blows away nitro and Luger showing up.

I marked out for we the people.

well, that ended extremely well I thought. The We the people ending was everything I wanted, I think there was some slow moments but man… that ending, the last 30 min, made me lose my marbles. Dang.

That really pissed me off tbh.

Good show, but the crowd going nuts for the return of Jack Swagger shows the AEW fans will get behind anything put in front of them… except the librarians haha

Luger was a terrible wrestler who was never even a wwe champion. He was a total loser and nothing.

Swagger is a former champion, current Bellator mega star and basically a huge character with a MAGA backing.

Luger was a terrible wrestler who was never even a wwe champion. He was a total loser and nothing.

Flexy Lexy was a star, though.

And unfortunately that’s something Hager has yet to achieve. I hope AEW books him well, b/c he’s still got plenty to offer a company. Good first night for him & JR built him up strong. Maybe he’ll finally get to give him the Dr. Death push. As long as AEW doesn’t do a Brawl 4 All, he should be alright!

We haven’t seen Hager in two years
and he’s a guy that most people feel could have been bigger if booked better. He’s perfect for an AEW crowd.

It’s so weird to hate on a fan base that “pops for anything”. You could hear crickets when Rusev returned a couple weeks ago. I’ll take the crowd having fun over the crowd bored to tears every day.