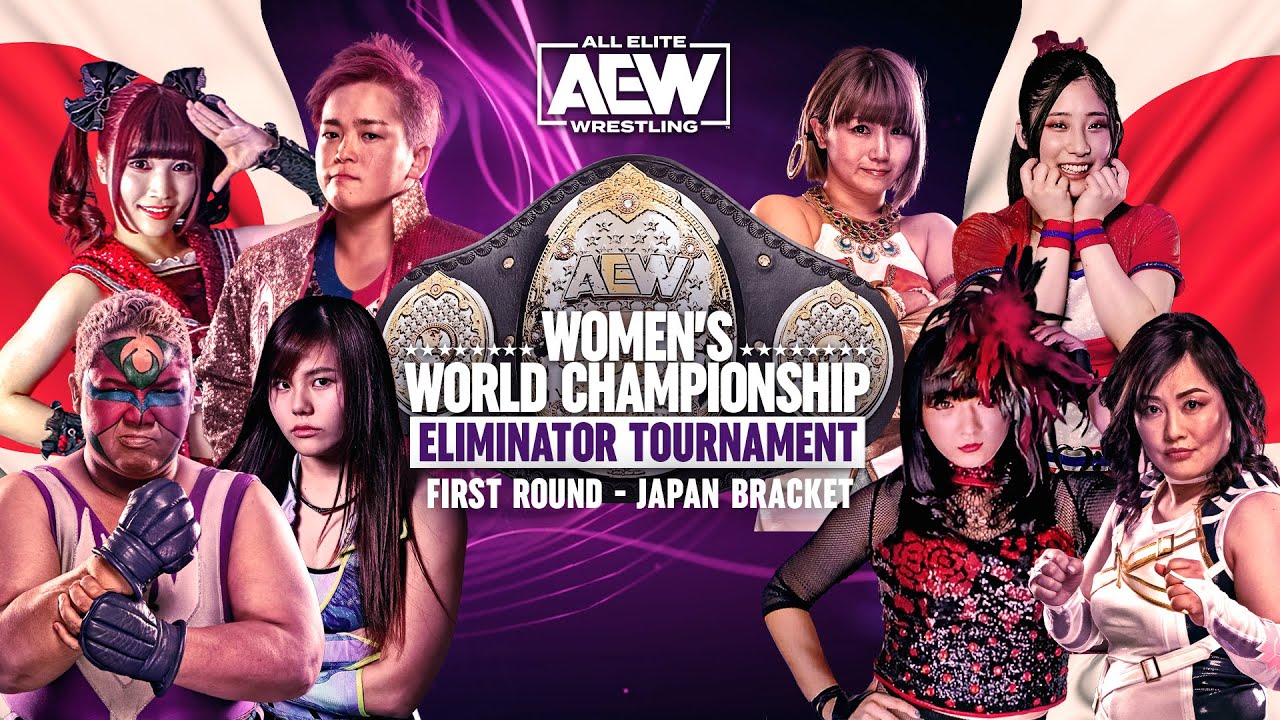 A few thoughts that stuck with me from the four matches:

Also note that the first round will be on Youtube with Japanese commentary later on this morning. 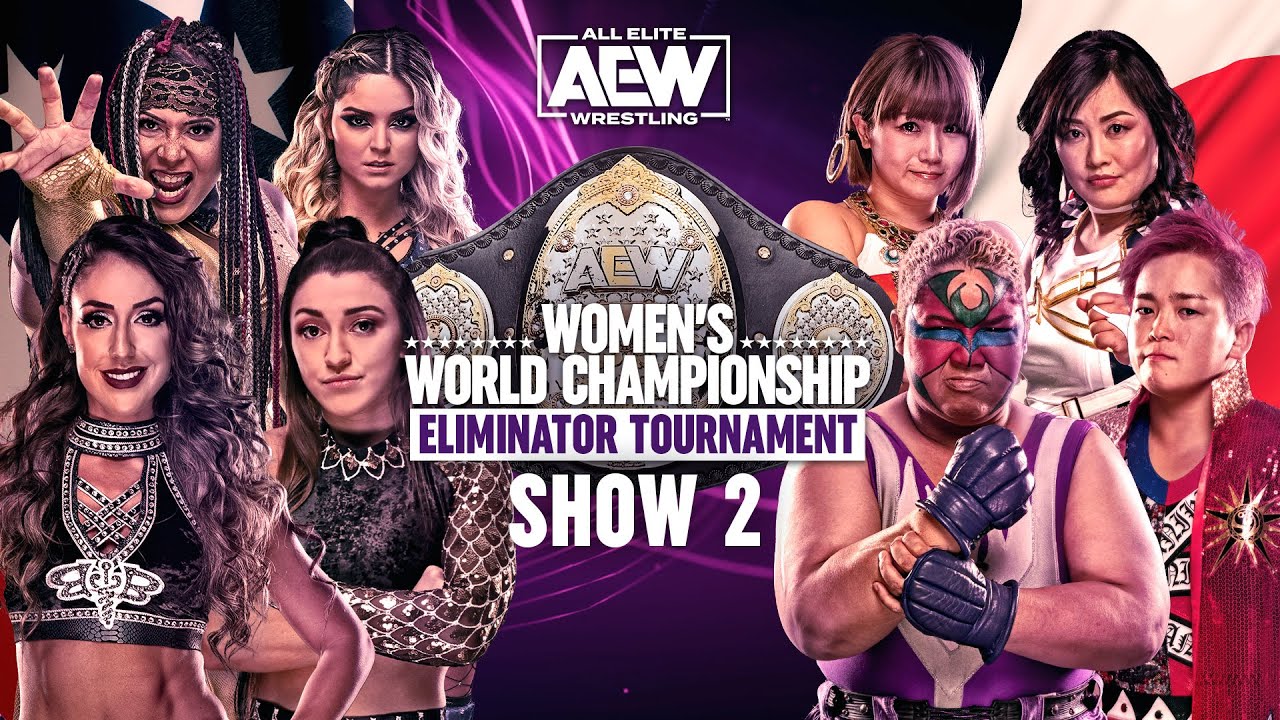 On the American side, Britt and Nyla going over were no surprises.

I do think Madi Wrenkowski did a good job filling in for Ana Jay. Yet, as I was watching this match I couldn’t help but think Britt will end up in WWE sooner than later, especially if she stays with Adam Cole (who Levesque apparently loves) as he looks to be a lifer there. Britt Baker strikes me as someone who could have a long future in WWE given her promo ability and that she can play a doctor (trained as such) well; a decade of stupid WWE skits can await her.

Nyla v. Tay didn’t do much for me as it felt like we’ve seen this too much before (ok, only twice before) and it didn’t seem much of an improvement other than Tay’s kicks are getting a bit sharper.

The card for the Sunday semi-finals on Bleacher Report should be good, though I am perplexed why Mei Suruga is on Shida’s team and not her mentor’s (Emi) team.

Said it before and I’ll say it again. Yuka Sakazaki wins the tournament or we riot. I’m not cheering for some girl with a scat fetish. We want the magical girl!

I couldn’t help but think Britt will end up in WWE sooner than later, especially if she stays with Adam Cole

I would have said the same thing a year ago, but I’m not so sure its not the other way around. I cant see a guy like Adam Cole, being cool sticking around in NXT for so long.

Britt made clear she would never go to WWE because they wouldn’t make it possible for her to work as a dentist. She wants to work both. Adam Cole will join AEW as soon as possible in my opinion.

If Cole signed a standard 3 year NXT deal in 2017 when he arrived, he re-signed in 2020 already, past AEW’s existence. He’s about to become champion again. The only smoke I’ve ever seen about this is just people saying he’ll go there without much else and…because they see him at his girlfriend’s work parties?

Doubt Baker would leave either. She’s the only AEW-signed non-Brandi woman on the roster who has been given significant character, stories, and time. Doesn’t seem like there’s anything from a career standpoint that would be helped by moving unless that changes.

Britt made clear she would never go to WWE because they wouldn’t make it possible for her to work as a dentist.

Yes… but… Vince McMahon has changed this or that policy over the decades. And who knows how much longer he’ll be calling the shots at WWE.

Britt seems pretty comfortable in front of the camera. WWE likes that because they want to place their talent in high visibility spots around the celebrity world.

She’s the only AEW-signed non-Brandi woman on the roster who has been given significant character, stories, and time.

Pretty much no other female talent has gotten any significant story or time other than Britt. Shida gets big matches but almost no story or background or promos. Ana Jay and Tay Conti got some attention from the Dark Order arc but that’s about all. Serena Deeb lately has gotten matches but again no story and almost no promos. Thunder Rosa has gotten a few matches and a few promos, all as part of the Britt Baker story.

Riho being back hopefully will start a new chapter for AEW’s women. I so hope that Yuka is a semi regular too.

I don’t see WWE changing the rules for Baker. Unless she goes there as an NXT lifer WWE has tons of travel involved, unless they eliminate house shows she won’t be able to be a Dentist. I could see Cole going to AEW before I see Britt got to WWE. But there is not requirement that they work in the same company to be together.

Cole will never have any big success on the main roster with Vince in charge.

I could see Baker doing well in WWE/NXT, but it seems like she likes the ability to continue her career as a dentist and WWE won’t offer that.

Reading the Young Bucks book, they really like Cole and O’Reilly. I think jumping to AEW would be a good move for either guy because neither will be talents Vince would ever push (too small, not muscular enough)

I’d heard that his deal would have run out last year but that he and other top stars signed an extension to the end of 2021 when the weekly show moved to USA.

Which depending on when could explain they break up storyline now. If he is leaving best to shoot the story right before he does.

Considering WWE was almost entirely signing people to 5-year deals at the time, I kind of find it a bit hard to believe they only added 1 1/2 to Cole’s deal when he’s so important to NXT. But we’re all just making assumptions here, I guess. There just hasn’t been any real signs he’s going anywhere nor that WWE wouldn’t outbid to stop him from going anywhere. There’s even a decent shot at this point that he’s facing Balor for the title at Mania, which is not the kind of thing you do with someone leaving (even Ambrose in the midst of a Shield revival didn’t get onto his last Mania). Cole has been enough in the background of the UE for the last couple of months that if he were leaving, it would have been far easier for NXT to leave him there instead of sending him off as one of the top-2 guys in the brand…so yeah…rounding out a story or not as Breng suggests… it’s not really WWE’s mode to enhance the value of talent going away, which only makes me think this is more hopes than what’s going on.

Just my two cents but why would someone leave AEW for WWE at this point unless it was a truly blow-away offer and guaranteed top spot (which Britt Baker surely would not receive)? AEW is clearly the “cool table” in the high school cafeteria right now and I think most wrestlers in North America understand that. Whatever extra money Vince could offer wrestlers could potentially be offset by the sorts of 3rd party endorsement deals WWE has banned. And that’s before the subject of creative control and less-scripted promos is breached. There’s no way these WWE wrestlers actually enjoy having to say “WWE Universe” and all the other eye-roll inducing lingo that gets shoehorned into their promos every week.

why would someone leave AEW for WWE

Money. That’s basically the only reason

It’s easy to say no one is going to leave AEW for WWE because there hasn’t been a possibility yet with the company being as young as they are and most contracts having been announced as 3 or 5 year deals. Inevitably, the day is going to come when those contracts are up and someone doesn’t think they’ve gotten enough on the AEW and will leave for other opportunities. It’s not realistic to think there aren’t going to be many reasons for that to happen as today isn’t the situation that will exist forever. Even one such as an ever-expanding roster with limited TV network time is going to be taken into account eventually.

But in terms of Britt Baker, I have no idea why someone who has successfully grown as she has and found her place in AEW would consider it.

Curious who on the AEW this would apply to that would think they might get a better look on WWE programming? Anyone who isn’t a monster will just be thrown into cuckery angles or made fun of for being too short.

Maybe Wardlow might fit the description? He’s the type of guy Vince might back the Brinks truck up for and put him in a prominent position and it’s not like AEW has really done much with him. He’s on TV regularly but is pretty much just a silent bodyguard. His highlight over a year and a half was the cage match with Cody and that was over a year ago now I think.

Wardlow is a good idea. But the Lucha Brothers, for example, have mostly done squat in terms of consistent focus for two years. Maybe they want to give it a shot. I’m sure we’ll find others between now and then (it’s not like the search for AEW gossip rivals WWE that we’d have a lot of hints, though Sammy G is a

at the moment). Moves don’t necessarily have to be for any reason you or I can think of. I don’t think wrestlers necessarily look at the situation with the same rubric as fans do. Many of them have spent their careers trying to get to WWE and just because AEW is doing well doesn’t mean that’s their end point. They could be there because it was their first big opportunity. Who knows. And there’s an entire existence between the two character types you’ve listed. Shit, The Miz is champion right now and he’s maybe 6’0. And there’s also plenty who might look at NXT as, at worst, an equal to AEW.

I think we have to remember that at a certain time, we could have said similar things about TNA being the cool option (in a way). Things change. I certainly hope not, but it doesn’t mean every single person signed with AEW feels like it’s the be all and end all for them. Even fan opinion changes quick. NJPW was the hot brand a year ago and now some people have turned heavy on it. AEW won’t be immune to that either like every wrestling company in history, no matter how much we want it to continue to grow forever.

I mean not the only reason, more people watch WWE so fame could be another reason. Especially if I were a top woman I could see leaving to WWE. Also as time goes on there will be people that think they can do better elsewhere and move.

Yeah definitely fame and money. WWE is a much bigger platform but with those benefits comes much less flexibility. They also do seem to have a much better handle on how to book their top women.

Speaking on the flexibility, Thunder Rosa would have been a perfect fit for WWE but AEW allows her to do other things. I think more and more that will be a big hurdle for WWE to overcome, especially with people who already have a following on the indies

Who on AEW would “would look better on WWE”?
My initial thought is almost any woman on the roster as they at least would get more time.
On the men’s side not much right now but as time goes on we may see some. The only one coming to mind is Miri. His WWE run was never as good as maybe it could have been but it was way better than what he is doing now. That may change with time but right now his value is way down compared to when he was on WWE IMO.

Yes wrestlers who want flexibility, either to work other careers, or other promotions will stay away from WWE.