I haven’t seen anything posted about this. Pretty exciting if true. 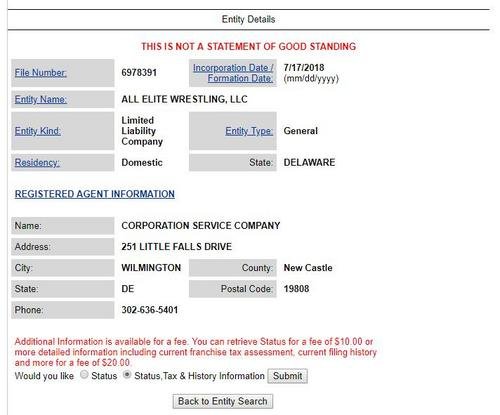 r/SquaredCircle - Trademarks have been filed for a new wrestling promotion...

As the story is looking, the owners of the Jacksonville Jaguars (Shahid Khan), and his son Tony Khan are likely in business with The Elite, and launching a new promotion in early 2019.

This has the money, and the ties to actually truly be a true number 2 / alternative to WWE. Rumours are looking like several PPVs over the course of 2019, leading to a launch of a weekly live series on a major outlet.

I, like all of you, will believe it when I see it… but this is worlds beyond anything Impact, or any other promotion out there since the demise of WCW, that has tried to be a viable alternative to WWE. This is something that may finally give workers an alternative, and maybe, just maybe, could grow to compete with WWE on some fronts.

I would love to know if this is to be a true wrestling promotion in the typical sense or a promotion that runs shows or specials that brings the industry together. I think bringing the industry together while helping New Japan expand here at the same time is where the success is. What’s another promotion with a top heavy roster in this landscape? I don’t see these guys thinking they can out WWE on Tv and I don’t see these guys wanting to put other promotions out of business - that would go against everything they’ve said for years about the Indy scene.

Unless these guys land anything better than that, then “world’s above” is hyperbole.

I think a big part of how successful it will be depends on how much money they will put into it.

Why not try taking / stealing some WWE talent.

I think that a big part of WWE having a big roster is so that other companies dont use the wrestlers. The same reason why i think NXT uk exists.

I really hope Jericho is apart of this. He has a great mind for the business and I think he is THE guy that can make this work.

I think you’re being unfair to TNA - for a time they were an alternative to WWE and a genuine number 2 with money behind them. It wasn’t always the dumpster fire of the last few years.

It’ll be interesting to see what the NJPW angle is (assuming this gets off the ground) - without the elite there really isn’t much they’re getting out of the roh deal.

I’d imagine they would try to continue with a similar format to an all-in type of show, bringing in some of the best wrestlers on the planet on non exclusive deals that way they don’t put any other companies out of business

ROH and Impact need to go out of business. They both have been around for 20 years and both brands have a bad stain on them at this point. If any brand is going to be a viable second option or competitive with WWE it has to be a new one with deep pockets.

I think a lot of it comes down to what does a new promotion want to achieve?
Weekly TV and typical wrestling tropes? A roster of high profile names?Or a PWG model

All In was clearly successful and I’d like to see that model take place on a more broad approach. 4/5 big shows that are carefully built and thought out. Use talent from a lot of places. And do non-traditional programming like a BTE or 10 lbs of Gold to build feuds and story.

If AEW was crafted with that approach, between stable financial backing (oppose to the guys putting up their own money) and sponsorships I thing we’d see it grow into a viable business model. That doesn’t mean spending fortunes in exclusive talent, it just may require a principal backer that can front the money until the show whereas I imagine the Bucks and Cody don’t have the financial stability to be paying out of pocket for multiple shows like that a year without certain provisions or contracted deals that come with a more stable broker like Kahn.
It’s interesting the twitter handle follows only venues. Venues may be more likely to get into business with a known player like Kahn and more reluctant to do it with Indy wrestlers. I think the definition of promotion is due to change anyway.

Agreed. It gives me flashbacks to the first Souled Out PPV. The name implies that only the Elite can be on the show.

Why would a billionaire start a wrestling company named after a group of semi-relevant wrestlers that are basically going to work for him…? Seems weird.

Sounds exciting and it would be good to have a company actually rival WWE when it comes to weekly TV but I think people are getting way to ahead of themselves here. First off, Cody & The Young Bucks are goofballs. Having a one time show just to prove a point is very different to running a regular show.

I really don’t think the intention is to rival WWE. Just form a viable enterprise to put on shows that offer an alternative and something different in the industry which has become oversaturated with the same ol wrestling tropes (with the exception of what BTE and All In were)

I really don’t think the intention is to rival WWE. Just form a viable enterprise to put on shows that offer an alternative and something different in the industry which has become oversaturated with the same ol wrestling tropes (with the exception of what BTE and All In were)

Right now we know nothing about the expectations the promotion is setting for itself. In fact everything we do know is still mostly just speculation.

What if I told you in 2019 a Wrestling promoter tried to create a competitor to the National Football League while an NFL owner launched a rival wrestling promotion. A 30 for 30.

If AEW offers benefits and healthcare / NXT like wages and upside with Merch it’s going to compete on a talent basis. The goal shouldn’t be WWE off the bat. Aim to be NXT and go from there