Can somebody explain to me what so special about this guy. Really, i’ve been following him since his debut in NXT and i never really saw him as a star like some fans see him.

To me, he’s always was a mid card talent that got lucky in NXT and got a title run because they had to call a audible in his title match against mcintyre and then had some great match with another guy that i see as a midcarder, Johnny gargano. Then when he made is unofficial debut at the royal rumble, he truly felt like a mid card guy that wasn’t anything special and since getting drafted to smackdown, he hasn’t change anything to make himself fell special and it’s the same tired stuff that made him look like a mid card guy in NXT.

But some fans and even journalist see him as a star and think he should be higher on the card then he is right now. So all i want to know is what i’m i missing really because i really don’t see what all the fuss is about with this guy.

Not going to question your opinion, but a quick fact check: I can’t find a reputable source confirming that Almas’ NXT Title win was an audible. PWTorch says no, and everybody that said yes in a cursory Google search was a random hack with no cited source.

Personally, i don’t care if it was a audible or not, i just don’t get why this guy is so loved by the IWC and reporters because i never saw anything that scream that this guy was a major star. Not in NXT during is babyface run, Not during is heel run and certainly not during is championship reign. I get, he had some great matches during this reigns but for me, it takes more then having great matches to be considered a main event level star.

He’s just a really good wrestler. I have learnt to like him even though he has zero charisma or mic skills.

He’s exactly the guy who “needs a manager to be a main eventer” and I think he has a great one.

I cant even take your opinion seriously, when you cant even get facts right, that you try and use to support your argument.

Anybody can be called a midcarder, if the company doesnt get behind them and give them the opportunities.

Oh I gave my opinion on the garbage you tried to spew as facts. I can elaborate more on you for sure, but what I have to say will only get me banned, so I’ll pass thanks.

physco hurricane have you ever checked to see if Jason Agnew has a message board? Making up facts is more of his thing. We respect and appreciate journalism over here.

Bro, thats hilarious because he actually is on Agnews facebook page.

I think the problem with the Almas/Zelina duo is that they’re on SmackDown. There’s just way too much talent on the SmackDown roster and this bloated roster is all trying to fit into a 2-hour window.

We were at the SmackDown house show 12/17 (day after tlc and day before they taped two SD shows). It was a real light working show (made sense given the schedule) but Almas was one of the few guys who showed up with his boots on ready to go.

Typed all that because I don’t watch WWE anymore but after that house show the three people who stood out to me were Almas, Naomi and of all people R Truth. Appreciate their efforts.

That whole “audible” thing was made up by the OP.

I can’t find where i saw it because it was so long ago but it might as been the guy on the Sport illustrated website that reported it or somebody like that. Anyway you might be right so i’m not going to argue with you about this. If this is true then it’s true if not, i’m sorry about making the mistake.

I am really hopeful they do Rey Mysterio vs. Andrade Cien Almas at a major show and give the spotlight to Andrade as a new face of WWE in Mexico. It’s the kind of match I wish WWE did more of at major shows like Mania or Summerslam where they utilize a marquee name for the casual crowd (in this case, Rey), and pair them with a star that has credibility with the smart crowd. Then let the two go out there and perform a high caliber match where no matter who wins, the casual base acknowledges that the match was awesome.

Bring them with Rey, work to get them leaving wanting more Andrade

(This is a formula that I’ve heard so many people say is what brought them to New Japan…come for Omega/Bucks, stay for the Japanese talent)

I think the problem with the Almas/Zelina duo is that they’re on SmackDown. There’s just way too much talent on the SmackDown roster and this bloated roster is all trying to fit into a 2-hour window.

I think this helps him more than hinders, and that may just be my opinion. He is getting to work with good in-ring guys on a show that is less likely to make a goof out of him (ala No Way Jose). For as full as the SD Live roster is, they haven’t gone as far as Raw does to make guys feel embarrassing.

But some fans and even journalist see him as a star and think he should be higher on the card then he is right now. So all i want to know is what i’m i missing really because i really don’t see what all the fuss is about with this guy.

I think fans/journo’s see him as a star because by all accounts before coming in to NXT he was a star. Have seen many say he was the Mexican Naito and the man behind much of LIJ’s current gimmick. Now, tell me LIJ and Naito aren’t stars?

Respect the initial opinion and he definitely hasn’t been slotted as a marquee guy, but the list of those from the outside in the past 5 years who have been slotted as stars is a very small list. I’d argue only AJ Styles has been penciled in that way…everyone else signed up has been mid-card at best on the main roster/post-NXT (Nakamura, Joe, Balor all come to mind).

I can see Andrade having the pee-gimmick.

How can he be a midcarder when he’s barely even on the show?

He’s talented but too small, no mic skills and not even charisma yet to be a big star on the main roster. The few times he’s tried to talk have been painful. If he didn’t have to cut promos he will be fine, but chances are he will have to and fail (see: Nakamura). 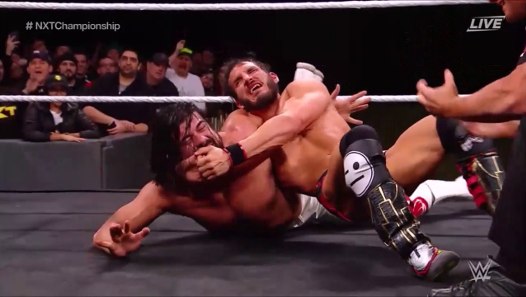 This is just one example of why fans see him as a potentially big star in WWE. Because he can have Match of the Year quality main events while working a WWE friendly style.

He’s also Latino. Some diversity is much needed at the top and the Latino audience has been sorely underserved with some lackluster stars to root for over the past few years. Kalisto and Sin Cara were never going to get to the same level as Rey and Guerrero. But Almas definitely could. Especially with Zelina by his side who makes a terrific heel manager.

The challenge I think he’s had on the main roster is that the reports are true that Vince still doesn’t like managers. He took Paul Ellering away from AoP when they debuted and has tried to take Lana away from Rusev multiple times and they both fail without each other. Zelina is both his best hope of getting over as a heel but will also be held back because of it.

Comparing Rusev and Almas is like saying a Mexican meal and a Belarusian meal are the same thing.

Not the same continents and not the the same number of drawing power between the two in the US.

All decided by one guy.