Anyone know if All In is going to be streamed?

I can’t imagine an event this big not being streamed.

The Young Bucks were on X-Pac 12360 and they said its likely after selling out so quick, but they dont want to commit to anything yet. They are in talks still.

They’ve gotta right? Twitch would be my first guess, but I could see them possibly doing something with Honour Club and/or NJPWorld

I wouldn’t be suprised if they strike a deal with both ROH and New Japan since talent from both promotions are on the show. I mean with those two combined streaming platforms they can reach alot of people. I mean I sure as hell will watch it.

Nothing has been announced yet, but I can’t see it not being streamed somewhere. I’m sure they will announce something about it before september.

Cody said on Observer Radio that its not a sure thing. They have talent from Lucha Underground, NJPW, and TNA, so they want to make everything legally is on the up before committing.

I’d be sad if it wasn’t streamed but I’m sure there are a lot of hoops to jump through. I also wouldn’t blame them if they wanted to keep it as an “exclusive” for the people there live.

I hope it gets streamed… though I see advantages to not streaming it if they want to try and make this an annual event. The fact its not steamed seems to help them get more talent and if it becomes an annual who’s who of the non-WWE wrestling world and the only way to see it live is to be there, I think this can not only survive but grow.

The Sinclair contracted. …can’t appear on televised events. Streaming would be considered “televised”

Cody pretty confirm that it won’t be streaming as of now but they had some very interesting meeting when they came back for the ROH UK tour. So i wouldn’t be surprise if they find a way to either have it on a streaming service or just have it on traditional PPV.

On last week’s episode of What Happened When Tony Schiavone mentioned that he was approached about announcing but could not do it because of his MLW contract.

If anyone needs to verify this, listen the the Capital Combat episode of WHW.

The Sinclair contracted. …can’t appear on televised events. Streaming would be considered “televised”

You can always work out deals, just depends on if it’s worth it.

Unfortunately for us it is only worth it for ROH if it’s done exclusively on Honor Club. Problem is how does NJPW feel?

It’s crazy to think they didn’t plan for all of this. Crazy in two ways:

It brings an element of realness to this since we’ve been able to track it all via social media. They claim they are flying by the seat of their pants and it does seem that’s true.

They claim they are flying by the seat of their pants and it does seem that’s true.

You’d think that the streaming would be one of the things mentioned in the early discussions of doing this thing, but maybe it’s under control.

Slap the thing on Honor Club (maybe you don’t want this with the troubles a few months ago?), bring down some Bullet Club shirts to make N.J. happy and get this dude some extra biscuits … 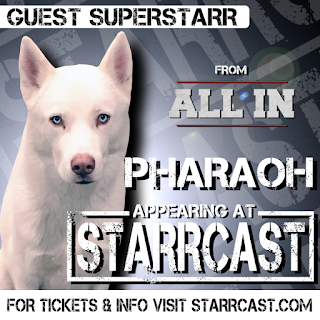 I don’t know… it could be worth it to ROH just to say “fuck it, do it” for the exposure All In is bringing to them. I don’t think streaming on Honor Club is doable since as you mentioned, NJPW, as well as Impact and Lucha Underground, might have an issue.

To me, it’s not totally unsurprising they don’t have the streaming situation set up yet. Strike while the iron is hot. They sold out a 10,000 set arena in 45 minutes. Everything else (financially and for the fans) is just gravy.

It is going to take a lot of people being really cool and not demanding crazy amounts of money to get this on steaming/PPV. I think the process will end up taking months especially since there is no way Cody, Nick and Matt will turn the process over to a 3rd party.

There’s always the possibility that they do the PWG model and film the show to release on DVD after the fact. Plenty of ROH, Lucha Underground and iMPACT talents have appeared on PWG DVD’s without any problems.

If that’s the only way, that would be cool.

I know I’d be willing to wait and buy it on DVD/Blu-ray after the fact.