Iv left this and I hope it’s read out on Thursdays cafe hang out but - I thought Darkside of the ring was really good: I watched it with my Gf who has no idea about this story or wrestling for that matter. She thought it was so good and gripping, she went through every emotion watching it, she was so fascinated by Nancy and said she’s an incredible women for everything she went through. Her final thoughts tho, we’re that he clearly was far to messed up about the death of Eddie and thought WWE should have done a lot more to help him cope with this issue and that mixed with his head trauma was the main cause’ and he wasn’t himself. As he seemed to be the most amazing father and husband. I want to know is, have you watched thy is or shown it to any non wrestling fans / people who don’t know the story and seen their views and opinions of the show?

Have you guys ever considered a Post Wrestling book Club podcast in a similar way you run your Rewind a Wai podcasts. You give us a heads up every quarter of a book you will review so that we can read it and leave feedback; and you guys then review it. I got thinking that one of my issues with reading is there not being people to discuss it with afterwards and thought this could be a good idea.

Just been watching some classic WrestleMania matches and have been reminded of the old commentary cliches. What cliches do you miss the most? Mine include “intestinal fortitude” and “an irresistible force meeting an immovable object”.

Dan in Denver
Hey Guys,
Love the site. I am curious if either of you know much about the relationship of The Rock and his father the late Rocky Johnson? I heard on a podcast that The Rock was on and off and even estranged with his dad over the years. Were they on good terms near the end? I know Rocky and Tony Atlas hated each other at different points, but did Rocky Johnson have a rep that he wasn’t easy to get along with? Thanks guys.
-Dan Stack

You guys seem busier than ever and I appreciate all the content.
Have you considered splitting off UFC or some other non wrestling content to someone else to give you guys some more free time?
And can WWE and AEW please give the refs some gloves? Sweat is like blood right now.

Andrew In Ireland
Hey John
In a recent show you said you were going jogging. I recently took up jogging as a distraction from the current pandemic and found myself really enjoying it. Just wondering do you set any goals or milestones when running or is it simply a pastime to clear your head.
Love the show, stay safe…

ok, here’s my first contribution to the Ask-A-Wai show…

Apologies if (a) this has been asked before, or (b) it’s a stupid question that nobody wants to ask apart from me…

if you were wrestlers, what would be:

Hey guys, as you’ve attended both a WrestleMania & a WrestleKingdom which would you recommend higher for a fan to attend at least once in their lifetime.

Hey guys, Colby Covington recently said he plans on joining WWE in 2021. Do you think this interest is mutual? Because I really don’t think his character works in WWE at all. With obvious ties to Trump, I’m sure WWE wouldn’t bury him. But pushing him would likely alienate a big portion of their audience. The only thing he really has to offer is his MAGA gimmick, so if wwe doesn’t want to touch politics, I can’t see them being very interested in signing him.

John, other sites use Post Wrestling as a source for their news briefs but don’t source you or Andrew or Wai, just a generic as reported by Post Wrestling. Do you feel that the writer of the article, or when you break a story, should be referenced by name or is referencing the website adequate? Also do you remember the first time you were used as a source for another outlet?

I’m being serious, do you think we will see the first female WWE or universal champion this decade? If so, is Charlotte basically a lock to be the one to do it?

A big question coming out of Mania was how do you do a Boneyard or Funhouse match again and how often?

In my opinion the Boneyard match was too long and needed more wrestling moves and the Funhouse match only works if you have a rich history to utilize and incorporate nostalgia i.e veterans like Hogan, Flair, Sting could all put Brey over without taking a single real bump and you could even build to a taker match swapping between the two worlds.

If they made these tweaks and had the right opponents to do a Funhouse match justice, since nothing can follow them anyway, why not do it to close a PPV after the “main event”?

Show it on the tron but never cut back to the fans, they can stay in the arena or leave, does it really matter?

I would still stick to once a year for each match, this can easily be overdone otherwise.

Was just reading up on Twitter and came across your header. Is there any back story to it? What/who is the clown on the right?

Hi, do you think Lars Sullivan can return, and be successful, or will he be written off completely, due to his health and past personal issues being held against him?

What’s up guys. Did either of you watch the Instagram Live beat battle between DJ Premier vs RZA? Whether you did or didn’t, did you have a preference between the two? Both are legends and it was an awesome 3 hour presentation of just two guys trading their best beats with some nearing 30 years old and still classics to this day.

What’s one lesson you have each learned about yourselves during this time of isolation? It allows time for new hobbies and more introspection.I wonder if you learned something or had something reinforced during this crisis?

Random question… Any thoughts /memories of the 6 man Armaggeddon Hell In A Cell match from back in 2000? It was one of my favourite matches as a kid, and looking back it now - even though it’s a bit of a mess - I can’t help but still love it as a match.

Any theories why WWE have never done it again? After all, matches being a mess has never stopped WWE from repeating them… And is that Rikishi bump the scariest bump to take in WWE history? I don’t care what you’re falling on, I never want to be failing backwards off of a cell!

I’ve always wondered about this about the All Japan exodus in 2000, why was Toshiaki Kawada the only person that decided to stay behind while Misawa and the majority of the roster walked out?

And also, now that you guys are close to wrapping up the MCU reviews and Black Widow now being delayed until November, what are you guys planning to do next?

Is it 100% confirmed that Triple H would become the CEO of WWE if Vince McMahon abdicates the position? Ever since I became a wrestling fan that’s been the “theory” that’s been thrown out. If Vince could no longer run the company, who outside the McMahon family do you think would be best suited to become CEO? Would it be out of the realm of possibility for that person to be Paul Heyman?

Secondly, whose idea was it for The Undertaker to have Limp Bizkit as his theme? Even as Biker Taker it’s an odd choice for entrance music.

I want to thank you both for giving me advice for my wedding last Summer. I was able to keep the wrestling references subtle by having a title belt on the back of the cake and having some of my childhood wrestling figures on each of the tables during dinner (pictured below). The staff working at our wedding even set up the wrestlers in their finishing move poses for us! Some of my older relatives were a little confused but they were a great conversation starter. After 9 months we are still happily married so thank you for not encouraging me to wear a title belt and walk down the aisle like Shinsuke Nakamura.

My question this time is about the next big milestone in my life: fatherhood. John, is there realistically anything you can do to prepare for becoming a dad? We are expecting in August and aside from hoping that the worst of the pandemic is over, there’s not much else I’m sure I can do. Have you read any books that you can recommend and/or tips for setting up a nursery? Thanks again to you both for keeping us entertained during these tough times. 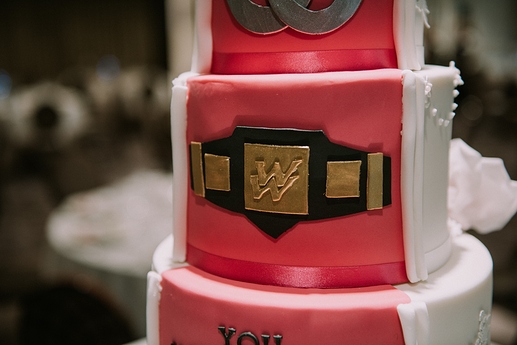 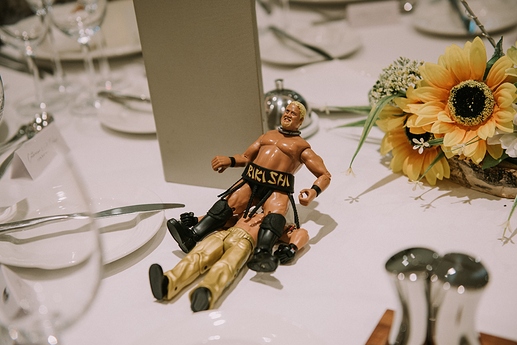 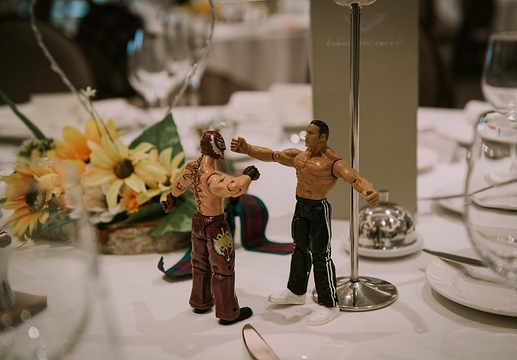