Gunn thinks he can be ‘a little rough on the outside’ when it comes to his coaching.

Since the beginning of All Elite Wrestling, Billy Gunn has been a part of the company and he’s currently featured on-screen with sons Austin and Colten Gunn along with The Acclaimed (Anthony Bowens & Max Caster).

In addition to his on-screen role, Gunn coaches backstage and he spoke about his position on episode ten of ‘Oh…You Didn’t Know with Road Dogg Brian James and Ryan Katz’. Gunn is enjoying the coaching role but feels that talents want praise with no critique or criticism attached to it concerning their performances.

Billy: I think right now, I’m having fun coaching. The thing is, I think I’m just — maybe just a little rough on the outside and it’s not — I don’t think people know how to take me because I’m very, what is the word?… I don’t do this job to — I have a passion, I love this job. I love this job, I love what I do, I love helping people, I love — I feel I have a wealth of knowledge. I don’t know everything, but I know some things and I know things that work and don’t work and I think that’s kind of where I’m at. I’m like, I’m not here to pet you, I’m not here to, you know — I’m here to make you better. If you’ll listen to me, I will make you better, I promise you that… I think these younger kids don’t understand where I’m coming from. I’m not like — yeah, I’ll be your friend and stuff but let me be your coach first and it’s not that I’m trying to tear you down. I’m not here to do that. I’m here to make you better so, you need to… I don’t know how to say this without just completely being a jerk… I feel they just want me to go, ‘Oh, you’re really good. You’re really good.’ Nothing you just did was good. Let’s structure what you can do to make it good. You’re just literally going out there and just unloading your gun at nothing.

I am when they get me to that point did it.

Austin and Colten joined the show to chat about their careers and what they’ve done in AEW so far. Austin shared that when it comes to promos, Shawn Spears is their go-to guy and he helps them in a variety of ways in that department.

Austin: Spears helps us so much with promos and what feeling to kind of grasp at during this time in the promo or how to gauge an audience and capture them so, he’s our go-to guy for promos. I think he’s brilliant at it and he helps me with verbiage and wording…

Caster and The Gunn Club teamed up on the Road Rager edition of AEW Rampage and scored a win over Bear Bronson, Bear Boulder and Leon Ruffin.

If the quotes in this article are used, please credit the ‘Oh…You Didn’t Know’ podcast with an H/T to POST Wrestling for the transcriptions.

Hopefully it’s just a small group of talent. Learning/growing from constructive criticism is what makes someone great at something.

Oh boy. Hearing this kind of concerns me.

Working with teenagers/young adults I see this all the time. Different people handle things better than others but I’ve always assumed it was a maturity issue.

Its because younger generations are too fucking sensitive. You need to baby them and always reassure them and basically participation trophies are the new 1st place. 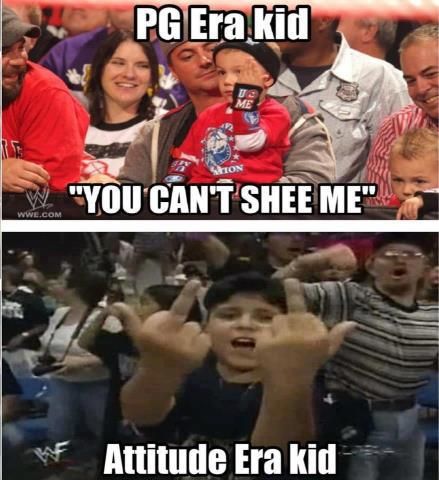 Oh man, you boomed that kid for…liking John Cena? Not flipping off the camera?

Every single generation has thought that the generation following them was “softer”, more “sensitive”, less “hardened”.

As someone who works with a lot Gen Z’s and younger Millennials, there is truth to what @Rated_R_Poster is saying. Sure the example is a bit extreme for effect lol, but there is 100% a problem with a large percentage of the kids coming into the workforce.

I can not express to you how much hand holding is needed to get some of these kids ready. Don’t get me wrong, I do it, and I will never give them a hard time for it. A lot of these kids need it, and to be clear I dont blame the kids one bit, I blame their parents for doing everything for them their entire lives leaving these kids lacking major life skills. But, its like night and day when I compare the self sufficiency of the average employee who just finished school in 2022 vs 2009.

Now of course, this doesn’t apply to all. The best of the best are still great at what they do, and are still going to thrive. But when you look at the average person (especially when I compare interviews) the difference is glaring.

But to @RWOB’s point, that is true of every generation. Yes training new Gen Z employee’s is a challenge.

But so is training any other generation! At most companies/industries when there is a new technology or process training Boomers and Gen X’ers to do something new usually feels like dragging them kicking and screaming into 2022. It’s just as much a challenge.

I would rather my kid look up to John Cena as a role model than practically any Attitude Era star. 100000%.

That’s a different conversation. I’m not implying or saying that generation Z/younger millennials are not as intelligent or that employees who are generation x are also not a pain in the ass (trust me, I prefer the gen z over gen x as gen x tend to be the most difficult). What I’m saying is that there is an issue with the way some of these kids are being raised which is leading them to be very needy and dependant on others, and when they don’t get what they want they do not take it well. I 100% blame gen x for this.

I think too often people get stuck on “this generation is better then that generation”…all that is pointless, I don’t care “which is better”, what I care about is improving and helping the younger kids whose parents never gave them a chance because they control them and give them an enhanced sense of self which leads to mental health issues when they sadly face the realization that they aren’t what they thought they were. When I see a younger kid have a breakdown because they get a complaint, that’s not good, and that’s the parents fault. It’s not fun teaching a kid that it’s ok to not be perfect because their parents made them feel they were.

As someone who has been an active member of the workforce for 30 some years, let just say that most people under the age of 23 are pretty stupid. This isnt a generational thing so much as it’s a lack of experience thing. Hell, i was a lazy kid myself. But i will also say, the absolute laziest co-workers have been the older, white male guy with decades of seniority. So, read into that what you will

I don’t agree their stupid….sure most 23 year old may be immature, and they may make bad decisions, but the majority I have worked with are not stupid.

Regardless, this isn’t what I’m talking about, and I don’t get the impression it’s what billy is talking about. The issue at hand here is a large percentage of kids having a really hard time with constructive criticism.