Coming from a man who wore a sheep mask I think this is a quite stupid remark.

The name is goofier than the mask. Don’t think the mask is much of an issue. Get old school Kane vibes from it.

I mean the bigger issue is that Luchasaurus is only big because of the AEW roster. If he was in WWE he wouldn’t be a big guy.

@Breng77 Luchasaurus is as tall as Punisment Martines aka Damien Priest. I think he is bound to play Marko Stunt in NXT, no? 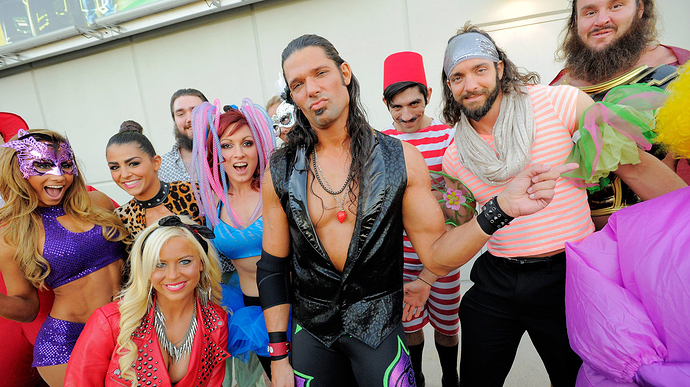 Real life I bet Adam Scher loves the gimick, wishes it was his

I love the Luchasaurus comeback. No war of words, just brushing it off with a joke.

Yes and Damien Priest looks big in NXT beside the smaller roster there if you put him on the main roster next to guys like Strowman, Reigns, Mcintrye and he no longer stands out as a big guy just on the larger side of average.

Damien is taller than Roman. He IS a tall guy. You can say Keith Lee is short, but not Priest. Lean, maybe, short - go fishing.

On a related note, this is what Adam Rose looks like now:

I said small, not necessarily short. And I said he would be of average size on main roster WWE. He isn’t Strowman, Kane, Lesner. He stands out as a big guy because of the smaller roster he is on. Just like Luchasaurus does. When you are 6’5” in a world full of guys 6’2”- 7’ you don’t stand out the same as you do if you are that guy in a world of 5’10-6’ guys

Dude, I know what you are trying to say, but it still sounds STUPID.

It sounds stupid that Luchasaurus’ status as a big man is a benefit of being on a smaller roster? It is obviously true. He isn’t tiny but he would not look like a monster on Main Roster WWE like he does in AEW. Strowman benefits similarly by WWE being smaller overall than it was earlier on. He would never be small but he would no stand out as much if he were surrounded by Undertaker, Kane, Big Show etc. He’d be among the bigger guys but right now he is the largest guy on the roster by quite a bit. Just look how big Billy Gun looked in that battle royal. He did not look like that during his WWE run. Heck he was the smaller looking guy on the smoking gunns.

Luchasaurus needs to lift a truck or have a tug of war with someone on Dynamite, that’ll get him over.

I think if anything this makes Braun look kind of dumb.

Also if you are rolling into Twitter to cut a Twitterverse promo on your competition remember, you are a babyface attacking another babyface so the winner is the person who out faces the other.

Luchasaurus apathetically engaging with Braun put him over more than if he were to have fought back.