Bruce Mitchell from PWTorch about the circumstances of Brodie Lee's passing

Edit: The article has since been taken down by Wade Keller. 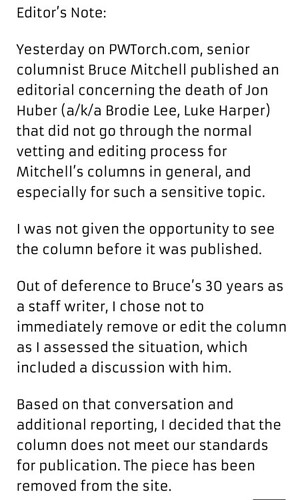 Having spoken to several individuals incredibly close to the situation - Brodie passed multiple Covid tests over the last several months. From early on in his illness, to closer to the end

He was at the Mayo Clinic in Jacksonville for a month receiving treatment. I’m pretty certain they’d be covering the obvious possibilities given the ongoing pandemic.

Mitchell is way out of line insinuating that there is some sort of conspiracy, when the fact is that Brodie’s wife wanted to keep the matter private.

Why would anybody at all hide it if this was Covid related?

Just give the family some peace as they grieve.

Natural for people to wonder what exactly happened but this journalist seems like one of those dickhead journalists that thinks they’re owed and have a right to know what’s going on in a famous person’s life. To end the article by suggesting that his family and AEW wouldn’t be serving his memory well if they didn’t share more information was truly disgusting in my opinion.

If he felt the need to write an article about the details surrounding Brodie Lee’s death being unclear then he could’ve done so in a less tasteless way rather than to suggest that his family are doing a disservice to the public.

Mitchell is way out of line insinuating that there is some sort of conspiracy, when the fact is that Brodie’s wife wanted to keep the matter private.

Sadly this is what some journalists and some fans do in 2020, they want “full transparency” and completely disregard the human element. Now to be clear, while there are certain circumstances that transparency is necessarily, there are others (this is a perfect example) where it is not and in those circumstances people need to mind their own business. This article is tasteless, especially given the timing.

Not that his wife owes any fan a damn thing, but I’m sure once she feels up to it, she will be more candid. Come on Mitchell, its been 2 fucking days.

Sadly this is what some journalists and some fans do in 2020, they want “full transparency” and completely disregard the human element.

This is not what journalists do. The individuals (like Mitchel) that do this are pathetic leaches on the industry. That’s all they are. True journalists like John and Meltzer aren’t demanding anything from the Huber family.

Chris Hero (Is Back) (ChrisHero)

@mitchellpwtorch Bruce. I hope one day you look back on yourself with extreme disappointment & gross embarrassment. You don’t know a fraction of what you ‘think’ you know & your speculation is heartless. Do better.
2 Likes
kliq December 28, 2020, 10:02pm #7

Agreed for the most part, especially with the idea that John Meltzer DO NOT fit into that category.

But there are plenty of shitty journalists out there in the wrestling media and in the mainstream media that solely care about getting clicks.

But here’s a shitty, tone deaf, reckless and mean article based on the premise of “yeah, but what if it was?”

Mitchell Column: Why The Questions Surrounding Brodie Lee’s Death Are…

Not here to defend Mitchell, though I just read his article and don’t find it as offensive as some here apparently do.

The backdrop that Mitchell brings in is the disastrous handling of the COVID-19 pandemic, at least in the US. That Florida continued to minimize efforts to slow the spread is well known, and now the results show in the death and hospitalization counts.

Wrestling companies have been lax regarding health measures and that includes AEW (though in regards to COVID they tried to be better than WWE, they were still affected.)

I do not think that the Huber family are obligated to reveal why Brodie Lee died. We should not demand that of them.

When looking at the past few months, many people were wondering where Brodie Lee went, in regards to not being on AEW. I do think that in a time of pandemic that it would have been the right move of AEW to simply announce that Brodie Lee’s absence had nothing to do with COVID-19.

IMO this is not an issue. WWE, AEW, Impact etc. have zero obligation to the public when it comes to informing them of the health of a performer. IMO, what the pubic knows should 100% be up to the performer him/herself, or the family of the performer.

Its one thing if we are talking general info (ie. 10 performers have tested positive for covid), its another when its about a specific individuals health.

Not here to defend Mitchell, though I just read his article and don’t find it as offensive as some here apparently do.

He didn’t have to do it in the tone that he did, and just 48 hours after the guy died. I don’t know what documents these guys sign as a part of their contracts, but generally speaking, they are not obligated to report (or give permission to report) any kind of health information to the public. Just like the rest of us.

I actually think Mitchell has some good points but the timing was horrible. Let his friends and family grieve for longer than two days before publishing something like that

I guess my question is - if it was Covid, why he thinks it wouldn’t have immediately come out when he first had medical issues two months ago?

AEW has been very open about people being off of shows due to Covid and Covid exposure… So why suddenly would they not have been for Huber? Like they knew two months ago that only his case would become fatal??

Again, he was tested multiple times from what I have been told, and it was a non-covid lung infection that was incredibly serious.

The family asked it to be kept quiet from early on.

And again, if it was Covid, why would anybody be keeping it a secret?

The conspiracy theories he’s looking to start are dangerous and gross.

His comment that you can’t suddenly get short of breath is completely false. Lung issues have been around before COVID and killed millions. To think all lung issues have to be COVID is logic my 6 yr old wouldn’t use. I can’t even list a full differential because it would be so long but suffice to say a pneumonia or PE can kill you MUCH faster than COVID.

Its mind boggling how many complete and utter morons have medical opinions and think they should write an article like this based on their likely zero knowledge of anything to do with your lungs. He’s basically accusing the company and his wife of a massive coverup based on his medical opinion? As a qualified what, moron?

I’m sorry if this is harsh but I deal with the stupidity daily. If you are going to not have decency to leave a grieving widow alone and call her a liar at least have some semblance of an idea of what you are talking about.

Wade Keller has since put out a statement: 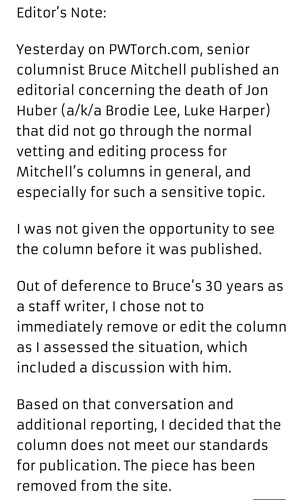 Now the article has been taken down, but Mitchell is still doubling down.

Occam’s razor. The simplest explanation is the most likely.

Brodie had a lung issue and his wife posted a simple explanation.

There is a massive cover up, AEW and his wife are all lying.

That was the right call. Posting something like that so quickly after the news was a terrible judgment call.

Unbelievably tasteless. If this nobody had these thoughts in his mind he should have actually investigated it before reporting some falsehoods. No consideration given to Brodie Lee’s family and friends, he took this on as a way to build his own brand at the expense of someone else’s tragedy that he knew has affected many people and has been all over social media. Shame on him, and our community in wrestling shames him openly.

For 20 years Slam Wrestling has been the leader in sports entertainment, wrestling news.

I have to image some calls were made by some pretty powerful people in this business. I can’t remember the last time I saw a news outlet apologize for a piece.

Even if what Mitchell is saying is true (which for the record I do not believe), wait more than 2 days.