Going through a lot of the old Royal Rumbles, I saw one of the spots I used to love as a kid – the double noggin’ knocker.

Does that happen much these days anymore?

What spots have you not seen for awhile that you’d wish would come back?

Keeping it to the classic Royal Rumble theme, one of my favourite spots is the Hogan-Warrior crisscross and double clothesline in ‘90.

Ha, remember when one finisher actually finished a match?

I always loved the Piledriver. I always thought it looked devastating. I understand why they banned it though.

Powder/Salt in the eyes! Seems like every manager back in the day just kept a handful of the stuff in their pocket just in case. So dumb, but effective!

I can’t remember the last time they did the spot where a guy is a sleeper hold and the ref has to lift his hand up and drops it 3 times to make sure he is really out.

I miss the “Flair Face-plant”. I always thought it was cool. In the back of my mind, I knew that Flair would ultimately go over. But the face-plant always made the babyface look strong. 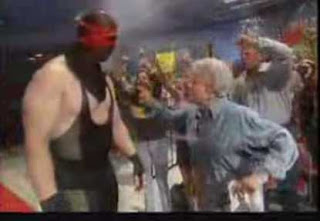 the classic ref hand raise during the sleeper/cobra clutch where the guy plays dead, they raise the hand twice and it drops straight down then third time the hand is just about to fall then suddenly…the guy comes back to life! Classic WWE/WCW spot that I can honestly say I haven’t seen in awhile. I did see it on a New Japan show recently but thats about it.

And it’s not really a spot but I loved the old background in WWF when they did promos. The blue locker room and just how Mean Gene or Sean Clooney would interview the guys.

I miss when matches used to be built around one guy working up to his finisher and the other guy trying like hell to avoid it. Like when Shawn Michaels would “tune up the band” or Austin goes for a stunner early in the match, the heel desperately gets out of the ring and scurries up the aisle to retreat, all with a look of, “Phew,” on their face.

Nowadays, guys would be kicking out of stone cold stunners in the opening tag match on Raw every week.

I’m looking at these spots thinking, “Huh, I saw that spot last week/month…”.

I’m a sucker for “World Champion vs. Lower Card Guy” title matches. Random TV matches where you know the title isn’t switching, but there’s still one false finish that fools you for a second.

The most recent example I can think of is AJ Styles vs. James Ellsworth, but the ones that immediately come to mind for me are Bret Hart vs. 1-2-3 Kid and Triple H vs. Taka Michinoku.

i wish someone would take on the old Bushwacker move of using the partner as a battering ram…great move. and wouldn’t hurt a single bit.

There’s a great forgotten match from Jan 2000 where Rikishi faces Triple H for the championship. So good.

I enjoyed the ol’ Abdominal Stretch and the heel grabbing the rope multiple times for leverage before getting caught. Easy heat generator back in the day.