I feel like that was a low blow by Punk. I know many people who are on their parents bank accounts so they can have signing authority in the event something happens.

I think it’s more so Khan wanting to hire Punk so badly but also not wanting to upset the Elite by not keeping Cabana. So he tried to appease both sides which was dumb. 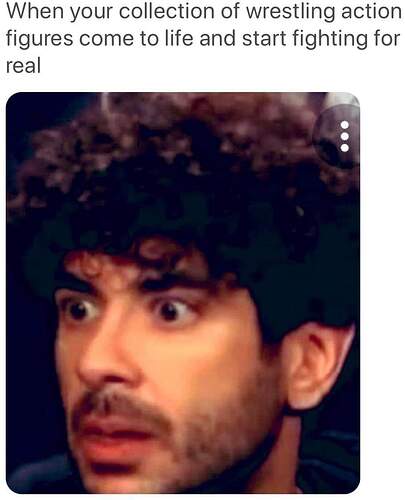 This one absolutely murdered me. So good.

Haha I’m only here for the memes. The memes have been hilarious.

I can’t wait to drop

44 year old here. Not saying this is Colts situation, but I share a bank account with my mom because I am also her caregiver. Because of COPD she can’t handle much including finances without help.

Even if he is a guy who is sharing an account with her because he’s struggling, I hate that is something to be made fun of. I’ve been in that situation in the past and it sucks.

Fantastic article here. I don’t think the EVPs are blameless at all but this mess is mostly on Punk.

Welcome to the Miserable World of CM Punk

The Grievance King Brings His Toxic Act to AEW

Fantastic article here. I don’t think the EVPs are blameless at all but this mess is mostly on Punk.

The guy who called Bruce Mitchell brave, for demanding Brodie Lee’s wife give answers surrounding his death. Both fall under the same category as Jon Alba. Shitty humans.

Even a broken clock is right twice a day.

I think it’s a very good article that’s pretty based in reality without much speculation.

They should be aiming for a big show tonight to try and take peoples minds off the shit. I’d go all out(no pun intended) and try and do what I could to bring in Bray Wyatt and do a big angle with the Dark Order/Hangman Page. Then you can have The Elite get back with Hangman when they return from suspension against a newly invigorated Dark Order.

Something like that combined with MJF returning should get some talk outside of backstage shit.

Garcia winning the Pure title and joining BCC would be great.

Moxley challenging MJF for the #1 contender spot while the title is on ice.

Personally don’t want to see Bray in AEW but can’t think of a bigger name to make more headlines with at the moment so may as well.

Makes you think about this promo by Cody - Cody Rhodes Held Nothing Back! | AEW Dynamite, 1/19/22 - YouTube

What did he know about bringing Punk in?

You know what’s interesting, watch this video at specifically 3:51. When Punk calls out the EVP’s for leaking info, Tony Khan nods in agreement.

While Punk 100% overreacted, and he definitely took it way too far, I think this online narrative of the Elite doing nothing wrong is a bit BS. I dont see Punk just making stuff up, I think that the Elite probably said something they shouldnt have that just snowballed. Its very interesting when you watch his face at that moment. Actions speak louder then words. 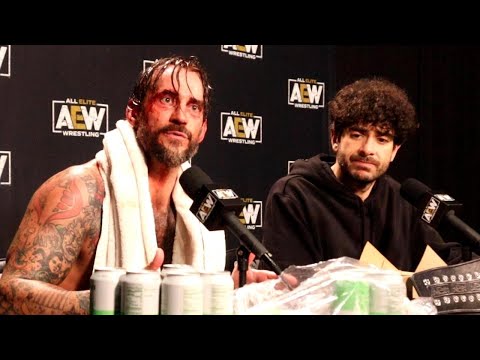 But it has literally been proven that he did make stuff up. He blamed them for leaking shit to the dirt sheets and it came out that it wasnt them who said anything about the Colt Cabana situation. I’m not saying they havent done absolutely anything wrong in the situation. I dont know, I dont work backstage and get to interact with them, but this is actually a case of CM Punk being paranoid, making something up in his own head and going with it and if he can do that, then what else is he capable of making up?

I don’t know if he made it up, I’m sure he believes it’s true. I don’t think he’s lying outright but his paranoia has convinced him that this is the case. However there could be some truth to it.

Did him coming to AEW have any impact on Tony Khan moving Cabana to a lesser role at ROH? It’s virtually impossible to know without asking Tony. Even if CM punk didn’t out right ask for it - subtle body language, comments he makes etc. could easily be interpreted as Tony realizing that this would be the better option. So if it had an impact or not, it’s impossible to know even if he didn’t outright ask for it.

Did the Bucks or any of the EVPs ever communicate to anyone outside of the locker room that CM punk being “responsible” for what happened to Cabana was not cool? Again it’s impossible to say. However, if you interpret “responsible” as I said above meaning that he is the reason even if he didn’t ask for it, it’s not that far-fetched to think they could’ve mentioned that to somebody in passing.

Say what you want, we did see Adam Page on live TV call him out for something like this. Adam Page is very tight with these guys. From what you can see of Adam page he doesn’t seem like the type to talk to reporters, whereas I don’t think it’s any secret that the Elite and the Melzer‘s of the world are tight.

So if he’s putting two and two together, and both Dave and SRS did allude to the fact that people are unhappy about this, he’s libel to implicate them. He knows how Adam Page feels, and he’s going to think that the Elite would’ve talkee to these reporters. Both of the reporters did put out that they were people unhappy with CM punk and his role in what happened to Cabana.

So both things can actually be true.

CM punk could have never asked for Cabana to formally be moved, but based on his attitude and comments he makes and general demeanour around Cabana or whenever he’s mentioned easily could have contributed to Tony moving him over. That could’ve easily annoyed the Elite, who could’ve said that to others, without directly saying CM punk asked for him to be removed.

I mean from what you know of CM punk do you really think he didn’t make his feelings on cabana very blatant and known backstage? He’s not exactly a subtle dude as we just saw lol

I think it’s unfair and nearly impossible to judge TK and his body language as agreement to anything Punk is saying.

I know for myself I will not nod in agreement but when I am actively listening to somebody. It’s a common enough form of a reaction I think. And as Punk goes further along, I think for legal reasons in Tony’s mind, he likely refrained from saying anything at all. Especially once Colt and the previous lawsuits were brought up.

Danielson really is the anti-Punk. Laid back, team player, will do a job for anyone, just wants to wrestle… even though they’re both vegan (Punk is/was, right?) and straight edge with ridiculously hot, former WWE Diva (remember that term?) wives.

Agreed. He was probably more stunned than anything and I think he clearly looked uncomfortable.

In retrospect he should have stopped it. Live and learn

But it has literally been proven that he did make stuff up.

What’s the proof? I’m not trying to be an ass by asking you this, I legit have not seen any proof one way or another.