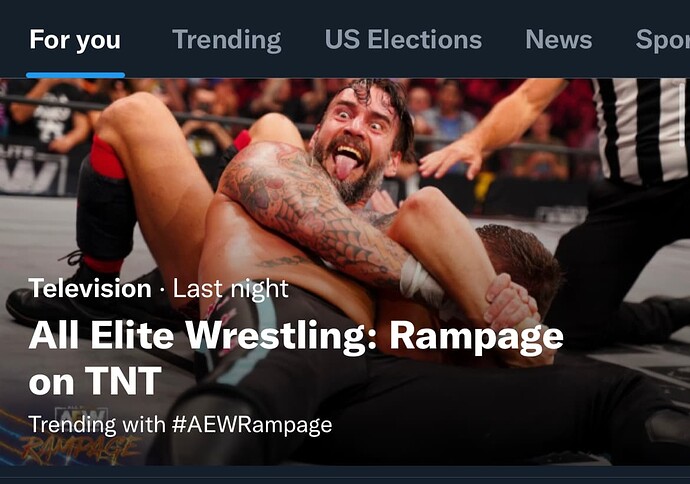 I completely disagree with this. Body language is very telling and its very easy to read someone based on it. If you watch a social strategy show and you see stuff like this all time time.

While I do think Punk acted the worst in this situation and what he did was way over the line, I feel like the IWC has decided to start a smear campaign against Punk painting him as this paranoid delusional man who just made stuff up while the Elite are just innocents who would never ever do anything wrong. I don’t buy it.

Oh 100% he looked uncomfortable…10 seconds or so prior when Punk said “its not for him to comment” Khan seemed awkward as hell that he was just cut off my an employee (or contractor, whatever). But at that specific moment, he agreed. Watch it, he nods with a “ya, thats true” type of movement.

I think people that don’t want to see it, will never see it. If you remove bias and just watch him, he tells a story the entire time.

Anyone who thinks the Bucks and Omega are innocent are fooling themselves. Plus they are “EVP”s so they should have a higher standard of conduct.

There’s no reason for all these people quoted to lie. This story makes it seem as though Punk is mostly respected backstage. Could the Elite be jealous?

I read the same rumours about Omega making an ass of himself at the talent meeting. Again, the EVPs clearly not suited for their role.

I’m sick of the story now but I say gave all parties the chance to actually do business. If not, let all of them go. They honestly don’t really need any of these guys that badly to pick and choose.

If Punk had such major problems, why wait to turn into a total asshole the night of his coronation on the promotion’s biggest stage of the year?

If he was so upset over the alleged stories, why not ask for a meeting and confront the terrible working environment head on?

All of Punk’s defense on the post scrum fight rests on the idea he was so threatened by the Bucks showing up to speak to him, WITH THE HEAD Of LEGAL and TALENT RELATIONS, that he felt the need to throw fists. After he literally announced to the locker room, if anybody had problems to go see him and speak to him.

I truly hope things get resolved, and money is to be made. However, the vast majority of the locker room seems to have no issues with the founders of the company to such a degree that they felt the need to do what Punk did.

Punk was somebody I always defended over the years, but the common denominator in all of these instances is him being unhappy. I think that maybe, he might carry more of the blame on himself.

However, the vast majority of the locker room seems to have no issues with the founders of the company to such a degree that they felt the need to do what Punk did.

The vast majority of the locker room isn’t the level of star Punk is and would be foolish to speak out. Maybe Cody left for similar reasons. FTR is rumoured to have issues with the founders. Jericho is too big of a star to be worried and the elite probably is aware they can’t boss him around.

In all fairness, I don’t think anybody in this thread is defending Punks actions. I think it’s perfectly fair to lay some blame on the elite while also holding Punk accountable for his actions. No doubt Punk is a pain in the ass and handled this in the worst possible way.

I just can’t get on board with this Punk is the villain while the elite are angels narrative, I just don’t buy it. If the elite did nothing wrong and were attacked for no reason, I highly doubt they are suspended and stripped of their titles.

There’s plenty of blame to go around. Clearly punk was unprofessional in both his actions at the press conference and throwing the first punch. It was also probably unprofessional and going after cabana like that in a public form when he really doesn’t have anything to do with this.

The Elite probably have made some bad decisions as management. The women’s division that Kenny’s a part of sucks, so I’m not sure he’s focussing his energy on the right things. The promo he gave in terms of peptalk has been interpreted more as a joke so I’m not sure if serious about that. But nonetheless yes, you can certainly call into question their management skills and I don’t think anyone will argue based on what we’ve seen they are amazing at their job.

However as per reports he was not really actively involved in fighting so much is trying to stop the fight, and they certainly didn’t launc the first public attack on CM punk. So in terms of professionalism in that regard as talent punk certainly comes across worse. In terms of professionalism as management they probably fell short of that standard but it’s not perhaps on the same level

Meltzer, Alvarez and Sapp have all said that it wasnt the Bucks or Kenny who told them anything about Punk being involved with Cabana not being around.

Im pretty sure the Bucks or Kenny are not speaking to anyone who isnt those 3. So Punk is clearly making shit up, because hes paranoid, or getting wrong info and going with it, which is just as dumb.

Agree with 99% of this. When you say all reports indicate “he” was trying to break it up, who are you referring to? I assume Kenny.

Come on, do you think there is a chance in hell that those three would out the elite as their sources? True or false, of course they are going to say that.

FTR is rumoured to have issues with the founders

Who posted these rumors? All ive seen is the Bucks suggesting FTR win the IWGP tag titles over them, which is weird to do if they have supposed “issues”

You realize like 100 other wrestlers are on the roster. All with their own agendas and reasons for spreading information?

It’s entirely possible other people spread the misinformation about Punk/Colt.

I think you are playing a dangerous game if you come out and say it is not them and it somehow comes out that it was.

If it was them, you dont come out and say it wasnt. You just say nothing.

Punks an idiot for how he reacted, zero defence from me but I’m not going to completely gaslight the man and just attribute his words to “he’s crazy, he’s delusional, he’s paranoid”.

Anything is possible, unless someone here on this board works for the company we’re all speculating at the end of the day.

I just don’t see respectable media reporting stories like this if the info is coming from a random person on the roster. I think the source would have been someone in the know, or someone who is close to someone in the know, and I would bet money someone in the elite is involved. Maybe they trusted someone they shouldn’t have, maybe someone got drunk and let something slip, who knows. Tony’s body language is telling though.

Yeah Kenny. Seems like Ace thought he wasn’t though

This all stems from the Dax attack on Dave Meltzer. Someone tweeted at Dave and said that the Bucks are holding back FTR or something. Meltzer retweeted it saying anyone with a brain wouldn’t believe that.

After that DAX basically retweeted Dave and told him to politely shut up– in stronger words - and then he doesn’t know how they feel.

I don’t think the issue is necessarily with the Bucks in that they don’t wanna lose to them - bit but that I think FYR feels like a big money rematches with the Bucks never happened. And they did lose that first encounter which I think some of the Shawn Michaels and Brett feel of nothing doing the job back.

I’m not sure anyone in this country cares about the IWGP tag team titles. And let’s face it they were in a meaningless stupid mat church the last pay-per-view.

It’s also likely that it’s passing them by a little. The Acclaimed are the new hot act. That could all turnaround but you can see why from their standpoint they would’ve liked to been in the main picture versus the bucks versus wrestling in a trios match against Impact dudes

Tony Khan has long said that he wanted to do the trios titles when Kenny was ready. I would have liked to see FTR vs Young Bucks at All Out, but the timing happened that Kenny returned by then. It wasnt like it was some out of the blue thing.