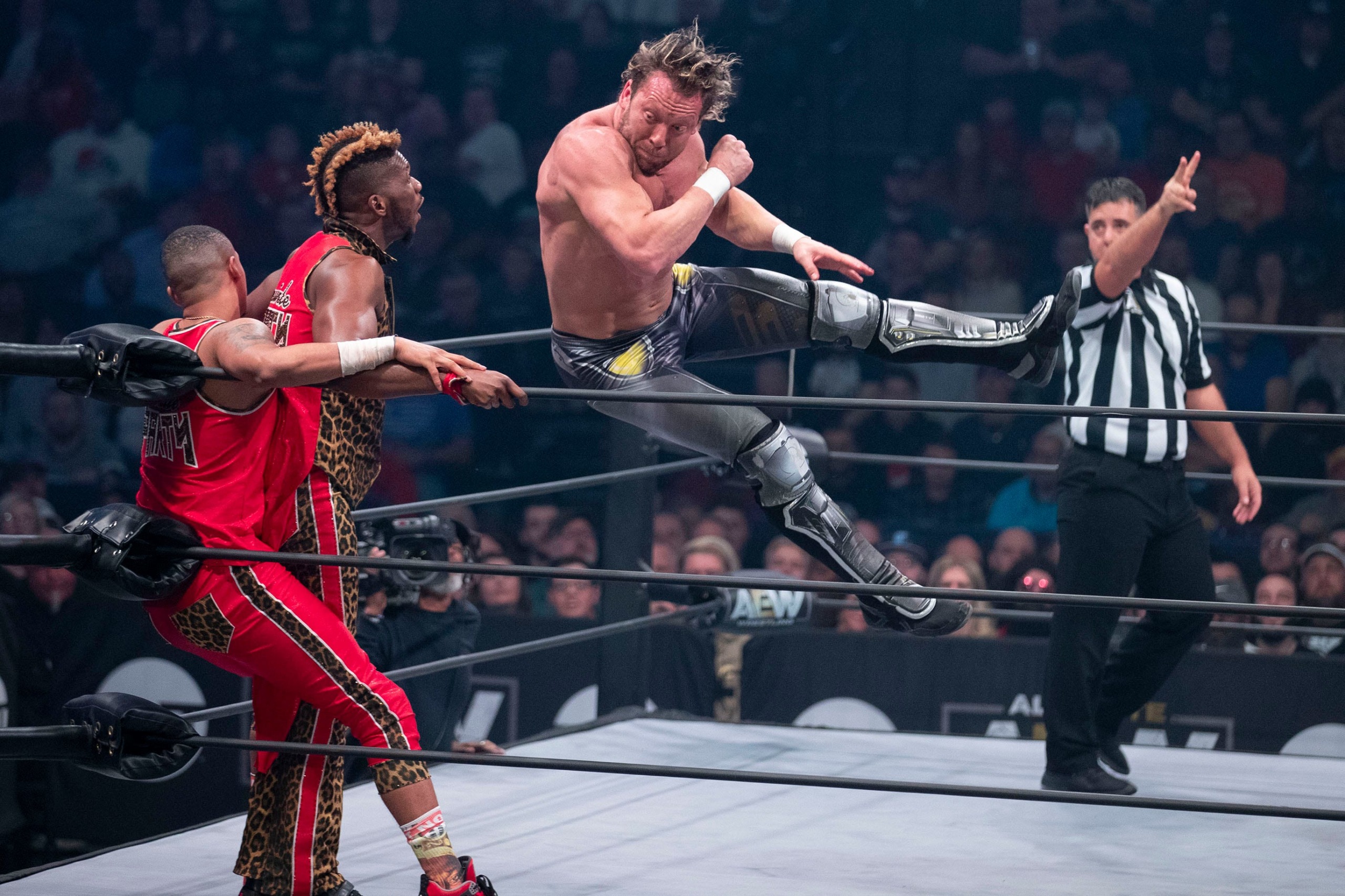 Domino's Pizza is disavowing any involvent in AEW's Wednesday night telecast showing a wrestler slicing up his opponent with a pizza cutter.

Domino’s Pizza is disavowing any involvement or knowledge of All Elite Wrestling’s (AEW) bloody telecast in which one pro wrestler seemingly wielded a pizza cutter to slice his opponent’s head open.

The fast food giant might also pull its advertising schedule from AEW, which airs Wednesday nights on WarnerMedia’s TNT network.

I heard Meltzer make a big deal about this on Observer Radio this morning, too bad for wwe this happened after the conference call

What’s ironic is that more people around the world probably saw this commercial due to how the clip went viral amongst wrestling fans - than they would have of it just played without being juxtaposed with such a spot.

Within the wrestling fan community, I dont think fans will care at all about this, myself included. From a business perspective though, this was a dumb move. Wrestling has always had a reputation of being a hard sell to advertisers, so when AEW/TNT are trying to sell ad time, having a national company like Dominos speak out against you is not a good thing.

Will it break them? No, Will it do any long term damage? Doubt it. But from a business perspective, it will likely hurt them a bit in the short term.

Personally for me, I never think that the ads I see during commercial breaks promote anything to do with what I’m watching.

How to cause an uproar about nothing when you have nothing else to do with your life. It should be just “funny” but it’s not offensive.

I dunno. If I was in a multi-million dollar partnership with a major TV network to advertise my products, I would absolutely want some control over the context in which they air. And using something associated with my product to mutilate a man’s forehead while my product is on-screen in a sidebar… ya, not gonna fly. It isn’t “offensive” to me, just a really, really stupid business decision. Really wouldn’t blame Domino’s for pulling ads.

Never seen a Nick Gage “match” (using that term very loosely) before Wednesday and would really prefer to never see that garbage again. Money talks, so maybe this will be the catalyst for AEW to finally review some of the crap they are putting on TV. I enjoy their product for the most part, but this deathmatch stuff should either be saved for PPV, or avoided entirely.

It’s interesting as back in the day when WWF was hit they had these controversies they kinda doubled down, especially when they weren’t a publicly traded company.

AEW have gotten themselves into these jams before and usually do a good job of getting out of it. Apparently according to Meltzer, TNT knew about what was going to happen so this is on both of them. One idea they could do is apologize on the show and say they will never have that kind of violence unless it is said far in advance. They’ve had violent matches before and the whole lights out concept was an old territory day thing where a violent match would happen after the show officially ended and they could maybe in advance have TV MA segments on the show, told in advance. So maybe a half hour window is curtained off on TV as TV MA, if that’s possible. Of course you wouldn’t do this every week as it would have to be a once in awhile thing.

Sponsors are weird because Tucker Carlson still has sponsors and strong viewership numbers (though only comparable demo numbers to Dynamite) and that is infinitely more offensive. Hell, a lot of complaints during the Attitude Era were around puritanical nonsense like swearing and lewd gestures and less about the racism, sexism, homophobia and transphobia. But there is a fine line to walk. AEW thankfully brings in good ratings so I can see this being more a slap on the wrist and a be more careful next time type of attitude.

Looks like they already have another sponsor to take Dominos place…

It’s a problem if dominos says it’s a problem. This isn’t a question of morality here. The question is, “did they piss off a sponsor”. The answer is yes. For a start up company, this is not a good thing.

Now, if the question is “should dominos be mad” that is an entirely different question.

Like I said above, this doesn’t bother me in the slightest, but my opinion as well as everyone else’s on this board means nothing (and I don’t say that with any disrespect). Its the opinions of the people that choose where to advertise that matter.

The ratings are all that matters. With the numbers the main event segment got they can find other advertisers. The network was fine with it and it delivered so no big deal at all

Domino’s sells pizzas… which we consume… which they cut… with a pizza cutter. If you can’t see the connection here, I don’t know what to say. Domino’s has certainly managed to connect the dots.

So there have been no comments from AEW, TNT or any other sponsors. The website that wrote the story went out of their way to contact Dominos, David Bixenspan pointed out some shadyness with the writer if nothing happens cool moment for them

In today’s culture climate, if Dominoes pulled there ads it would be a good thing because some company would take the counter position and spend more to jump in an say “we weren’t soft”. Agree or disagree, that is American culture today.

I think the next logical step here, is to see an actual pizza used in a death match next time. I’d like to see a canadian destroyer into a pepperoni pizza.

Papa John’s will sponsor a spot. They don’t give aF

Shaq can bring a few shaqaroni pizzas with him, or whatever the fuck they call them, the next time he shows up.

As a one off, sure, I agree with you. Its not like they will loose a sponsor and not find one to replace it. I don’t disagree with anything you are saying. But I find it surprising how many fans are so out of touch with the way the business world works (I dont mean you, you come off very knowledgeable) and think this doesn’t matter at all. Ultimately all these wrestling companies are in the business of making money, and pissing off any sponsors for any reason is just not a good idea, especially for such a stupid reason.

Again, I’m not saying they are screwed or wont recover as they’ll be fine, but hopefully they learn their lesson and are a bit more aware moving forward.

Mainstream reporter privately claims WWE pitched them on writing an...

Domino’s officially said nothing, WWE wanted somebody to write about AEW losing sponsors, the people who wrote this wrote a PR piece that WWE Public Relations tweeted out