It’s a minor thing amongst all that happened at the Dontaku shows, but I kept noticing a particular camera angle or trick being used at multiple points, especially on night two.

There’d be a slightly lower than usual shot right from ringside looking up at the wrestlers, always framed to have the ring centered and the bank of lights above the ring in clear view. This was often used when both wrestlers were relatively still, either before a match began or during a mid-match dramatic pause. The end result almost looked like still photographs from famous boxing matches, showing the huge expanse of dark space above the wrestlers and connoting a huge amount of gravitas and significance. Because of the lights you can’t see the crowd at the back of the arena, and it’s almost as if the wrestlers are fighting for the sake of history or some other principle larger than the crowd. You can see what I mean around 42:00 into the Okada/Tana clip. 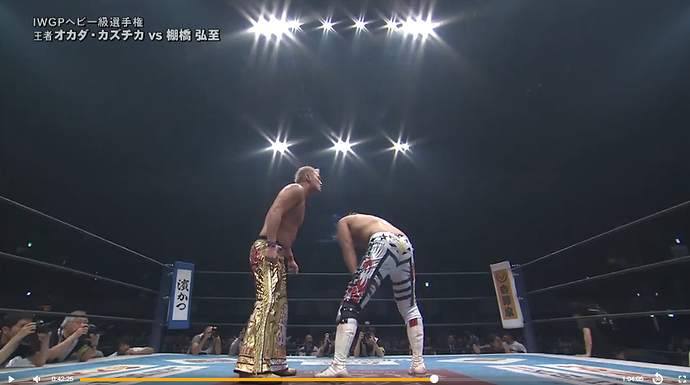 There were at least half a dozen shots composed exactly the same way over both nights. I’m sure they might have used this shot before on other shows, but there seemed to be a conscious decision to go to consistently go to that shot at Dontaku, maybe because of the striking bank of lights in that particular arena.

Showbuckle’s already done a great job of breaking down how NJPW’s camera work helps put its product in the best possible light, but it’s cool to see them finding new (at least to me) ways of presenting their wrestlers.

Wow great pickup! Thanks for posting