An earthquake that hit Sendai on Saturday morning led to a temporary halting of New Japan’s card at the Xebio Arena in the city.

In the middle of a six-man tag with Kota Ibushi, Kazuchika Okada & Hiroshi Tanahashi against Jay White, KENTA & Yujiro, the arena began shaking and it was extremely visible watching on the stream.

This led to the show being stopped for approximately twenty-five minutes after it was discovered a 7.2 earthquake hit Sendai.

The match and card did resume with the English commentators reacting as it happened and filling time while also learning what was occurring in real-time. Chris Charlton, who is based in Japan, was not in the building noting he was at the New Japan offices in Roppongi but stated he did feel the earthquake from where he was.

Authorities in Japan have issued a tsunami warning following the earthquake.

Sometime after this, I received this email. 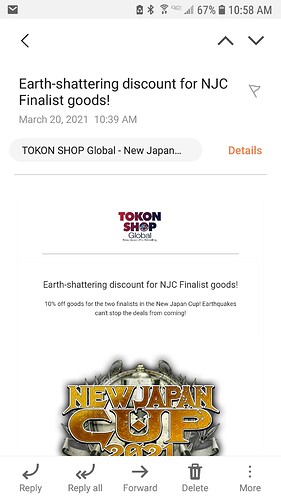 Could have been scheduled email.