Fastlane Title match is going to be a Fatal Four-Way?

On the WWE app, Cathy Kelley let it drop that the title match at Fastlane is going to be a Fatal FourWay…during the “Stars react to Smackdown Top Ten” report… 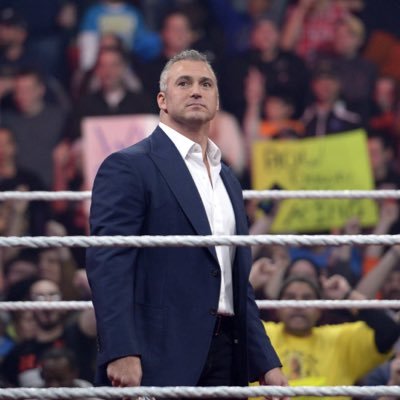 An unexpected end to #SDLive with a triple threat match made for #WWEFastlane...I’m going to make a bit more interesting. Next week: @BaronCorbinWWE vs. @HEELZiggler. The winner is added to the match and makes it a #Fatal4Way for the @WWE title.

A really, really, really stupid booking choice. I mean…what in the actual fuck has Ziggler done in the past 6 weeks to desevre a shot at a title oppurtunity? Or Corbin, for that matter?

It could be a swerve and we’ll see Shane be the fourth.

The Edgelord Vs The Tryhard

Shane could’ve thrown Mojo in there if he wanted too.

Dolph’s return was so lacklustre, he shouldn’t have even gone because he’s no better off. Corbin has also lost a lot of his steam that he had last year after winning the MITB. The company are telling the Owens/Zayn story over the WWE title and they’ve added an unnecessary guy just because.

So, Mega Ran (rapper, friend of The New Day and The Fashion Police, and podcaster) was backstage at Royal Rumble, watching the show on the monitors at Gorilla and he overheard a conversation between Arn Anderson and Dolph Ziggler - obviously there’s no way to confirm any of this so take it with a pinch of salt, but he has no reason to lie about it - and basically Arn asked why Dolph was there; “I thought you were coming back with the new US title belt?” he said. Apparently Ziggler wasn’t overly happy about the situation and the whole thing was supposed to culminate in a feud over who the real US champion is. Pretty much just a rehash of HBK/Razor… but at least it makes sense and is a conclusion. At this point Dolph looks like an idiot and has pretty much shit on the US title for no reason.

You can hear Mega Ran go over this whole conversation and other fascinating little tidbits on the Royal Rumble episode of his podcast Mat Maniacs. I think we all suspected that was the way they were going and it would’ve come off as lazy if they’d done it… but it would’ve been better than this.

I don’t know who Mega Ran is even though I thought I was a major hip hop head…but dude just lost any backstage access after telling thar story.

Going back to a title that he shat on was just as dumb as a random rumble appearance anyways. Shane Douglas didn’t go back to the NWA to reclaim thar title after he threw it down.

I truly doubt that anyone in WWE is listening to Mat Maniacs, and that episode was released two weeks ago and I’ve seen nothing about it online. I’d say he’s safe.

Ziggler gives up the United States Championship, leaves TV for months, shows up to do nothing in the Rumble, now added to a nothing match which then became a WWE Championship Qualifier match.

If he makes so passionate promo about what a great opportunity competing for the WWE Championship I think I’m gonna scream!

It wasn’t that long ago that they tried pushing Dolph for the WWE title and it failed terribly. It’s been said before but he’s underground appeal has long gone and he’s now just a cog in the machine and not a big one at that.

I was never a fan of having your world title defended in multi man matches. On top of that, it seems that this company is just over doing it lately with these matches. Is it too hard for them to just have a number one contender face your champion?

Just proves even more that Fastlane is a nothing show.

Hot take…show before Mania is a nothing show

Doesn’t Shane realize by doing this he is lowering AJ’s chances of retaining from 1 in 3 to 1 in 4?

I could see a double count out or a draw with Ziggler and Corbin, but because they gave a “superlative effort”, Daniel Bryan will put them both in the match, making it a 5 way.

Who wants to see Owens, Zayn and Styles again. Sure it’ll be a good match but it’ll have a screwy finish and an obvious outcome.

Adding Corbin and Ziggler adds nothing though I agree.

I would have preferred Owens and Zayn having and the winner to face Styles one on one in a better match.

and maybe the loser faces the winner of a corbin, ziggler match for a shot at the USA champ, its not rocket science. We have a 5 man match for the headliner of this PPV and a 6 or 7 man headliner for E.C., (i can’t remember) we could have a 6 way womaans match as well at wasteland and the EC woman match as well …too many people in matches no one cares about. Get yourself together WWE, your product sucks right now.

Provided this match stays as currently booked between now and Fastlane, I’m going with a Zayn/Owens breakup, Ziggler almost winning so he can come out of it as a holdover "feud’ to get Styles to Wrestlemania (in which I will likely fast forward the promos but can’t wait to see the matches), and Baron Corbin eating the pin and going back to whatever it is that Baron Corbin does.