Please leave your feedback to the 25th Anniversary of Raw.

What worked and what didn’t work on the show?

Will edit this a bit later:

(From 10:50ish pm) This is absurd. The crowd in Barclays is sitting (and leaving) while watching this Revival/Club match. The audio cut out during the DX promo for a bit in the Arena. This on top of Taker not appearing here and the Hardy/Bray match being aired here with no play by play.This crowd is not happy in the arena.

(From just after the show): well, as disappointed as I am to have not seen Taker and DX live, I’m almost as disappointed that there was zero anything for the crowd after Raw went off the air. With so many names back we couldn’t get one exciting dark match to reward us for missing out on 2/3 big returning acts? I see people feeling bad for the Manhattan Center crowd but I don’t know what was advertised for there. Meanwhile a hot BK audience sat on our collective hands groaning every time we should have been going nuts. Felt like I could have gone home and enjoyed the show from my couch with a fast forward button after the first segment with Austin.

Highlight I’d say in he arena was the beach ball. Cena was great about it.

Also, having attended a few house shows over the last few months and even ROH ppvs I was shocked to hear how mic’d up the ring was. I didn’t enjoy watching matches with that affect. It sounded very different than the other events I’ve seen more recently. Lot of down time too. If anyone’s interested what a Raw taping is like, it’s not that fun tbh. I can see why crowds die during the three hours. But then again tonight should have been electric and instead was anything but by 8:30pm.

The set-up for this show was just awful. As a viewer I felt so bad for these live audiences. They paid a pretty penny to watch half a show.

The cherry on top was The Revival playing The Ascension and getting jobbed out to the legends. What a disgrace.

I felt sorry for the Manhattan Center crowd until they blew their chance to justifiably hijack the show. They were chanting for refunds off TV but then they just lapped up the cheap nostalgia and gave WWE the on air reactions the company was looking for. Cowards.

Several months of hype for one of the worst Raws of all time. Complete incompetency

Minus ten out of ten.

Honestly I thought this show sucked. WWE had a real chance to try to draw some lapsed fans back in with this show. And I think for 99.9% of people who no longer watch, this show has made them say “why the hell did I ever used to watch this crap?” I feel like neither live audience was probably happy with what they got tonight. 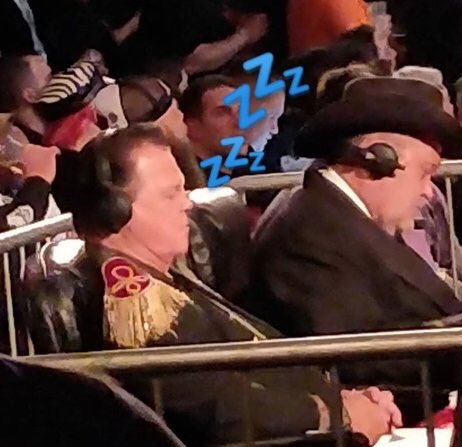 What a dismal show that (aside from a red hot opening) did little to nothing to hype the rumbleor the crowd. The fans to their credit stayed pretty responsive anyway. The women’s match was OK but nothing special but that was much better than the offering the poor fans at the Manhattan Centre got, was that a retirement speech from Taker?

Most of the cameos happened backstage so as somebody at home I feel I got quite the similar show to the crowd in attendance. I think the nostalgia factor for the attitude era is finally dying, I mean the guys that showed up here are pretty much the same guys as Raw 1000 in similar skits, a shame but it’s about time this company reaped what it sowed. The failure to make new stars is going to cause real problems starting this year because I don’t need to see these old guys at mania now

I guess I’m not that cynical but I enjoyed a couple segments and seeing some nostalgia. I expected to get a couple laughs and I did.

What a huge disappointment. Stayed up to watch this expecting something notable and was met with a substandard Raw filled with old-acts and absolutely nothing of value outside Miz winning the IC title to set Reigns up for the inevitable Rumble win.

I feel really bad for the Revival for getting Ascensioned and in genreal for the crowd at the Manhattan Centre.

I thought the rating system was out of 10. I haven’t paid attention before, were the previous shows rated roughly 5/20 before?

I am trying to look at this show through the rose colored glasses of a 16 year old me, but to be completely honest, I thought this show sucked. The WWE had a real opportunity to bring back some of the lapsed fans by combining the nostalgia of the past with a showcase of the future, but instead we got Titus/Crews verses Rhyno/Slater?

A couple things I did like was the opening segment with Austin/Vince, and I did like the DX/Balor Club segment because it gives Balor, Gallows and Anderson “the rub”, but by the 3rd hour the WWE had crapped so badly on the crowd at the Manhattan Center, that they didn’t seem to be into the segment as much. I also feel that the Dudley Boys segment should have been there and not at the Barclays center.

Overall I was incredibly let down by this show, there were a lot of things that I felt like the WWE dropped the ball on.

For all those worried about the Revival getting buried, at RAW 1000, D-X beat up and embarrassed Damien Sandow, and look at what a star he’s become.

This show was poorly executed and poorly thought out. The only thing I really liked was Elias getting some heat on Cena. The problem there, though, is that I think there’s a pretty low ceiling for Elias given his in-ring limitations.

Stayed up till quarter past four to watch this show and wish I’d just gone to bed early and listened to you chaps.
None of the legends really did anything significant with most of the cameo segments being utterly pointless. I felt especially sorry for the likes of Eric Bischoff and Trish Stratus who were brought out to wave at the crowd.
Meanwhile, this show told us nothing that we didn’t already know; Strowman likes throwing people through things, Asuka is going dominate at the Rumble and Jason Jordan is a bit of a knob.
The biggest waste was the fact that The Undertaker’s return wasn’t used to set up the programme with Cena who in turn appears to be tied up with the tiresome Elias for the time being.
Suffice to say I won’t be staying up to watch Raw again.
Keep up the good work gents

Putting aside what the people in the arenas must have felt, especially the fans in the Manhattan Centre who were clearly second fiddle, this was a lazy show.

Nostalgia is a funny thing for WWE. They build their entire image off of what they’ve done before. Every fan has seen all the BIG moments in WWE history time and time again. So another entire show dedicated to it for three hours with not much other than “Hey, remember this guy?” feels like a lame attempt to tell me about something you’ve already told me about a million times before. This show did nothing for me. Don’t know if it did anything for anything.

Omri from Israel:
First time in a long while that I watched a WWE event live, and I have to say that it did not convince me to pull more all nighters for this. Almost all of the show was in Brooklyn, we got a meaningless tag team match only for the return of the Dudleyz and The Revival really did get the ascension treatment. The first hour was fun but the rest just horrible. 3 out of 10 tag teams being buried.

This would have to be the worst “Special Edition” of Raw I’ve ever watched.

It was pretty much every “Special Edition” ever, a boat load of returns for the 80’s & 90’s most of whom had forgettable TV Time, Forgettable TV matches with today’s “Superstars” & a “surprise championship change” on TV.

But most of all I feel bad for the live crowd in the Manhattan Center who only got 5 segment, one of which being JR & King welcoming us to Raw. God I hope the got refunds if they paid US$800.00 for tickets.

Howdy buds! I wasn’t too wild about tonight’s Raw. It was one of those nostalgia-heavy Raws that feels more like a variety show or dinner theater than a wrestling showcase. I loved seeing the small touches at the Manhattan Center like the Ico Pro banner and the fan that brought the Silk Stockings sign, but the segments and matches there felt off and borderline uncomfortable. I was particularly bummed out by Taker’s incoherent promo. At least there were enough fun gags that’ll look good in a year-end highlight reel.

Just had surgery for appendicitis a few days ago. I decided this morning that I have to go back to work tomorrow, so I don’t lose all my sick days.

This is the first RAW I’ve watched live in many years and I really wish I had just waited for the review.

This show was a massive letdown. Outside of the Austin/Mcmahons, Miz Title win, Elias and the closing segment, everything else was a complete waste. I dont know why the WWE continues to hype up all these “legends” for their big shows, only to just throw them out there for an introduction on the stage, or the usual Ron Simmons “Damn!” segment.

That time could have been given to someone like The Revival, in something other than treating them like a total joke. The Manhattan Center stuff was a complete waste of time. I was looking forward to someone at least interupting The Undertaker.

2 questions for you guys…

What can I say…that show was pretty bad.

The opening McMahon/Stone Cold segment set the bar too high for the evening and was just a steady descencion.

I get that this is a special show that isn’t necessarily part of the WWE’s canon, but correct me if I’m wrong…the last time we saw Christian on WWE programming, wasn’t Seth Rollins trying to MURDER his best friend? Now they’re okay and Seth had all the respect in the world for Christian. Zuh?

I’m glad to see Jeff Hardy had been relegated to “goof in the back who hangs with the Boogeyman.” Good on him.

But hey it wasn’t all bad. Elias looked like a million bucks. Plus we got to see WWE trailblazers like Kelly Kelly!

One last thing. It’s clear how far out of favor Hulk Hogan has fallen within the WWE ranks. If there was a time to bring him back, it would have been tonight. Instead, I don’t even really recall seeing him in any video packages/still photos shown throughout the show. Yet CM Punk popped up a few times.

Raw25 was a real lame duck show. Outside of the Stone Cold and Godfather segments, there was nothing substantial or worth watching at all. It felt really disorganised and thrown together.
The amount of commercials was excrutiating as well. I haven’t watched Raw live in years, but it was just brutal and really gutted the viewing experience.
Overall, Raw25 didn’t feel like a big deal in the grand sceme of things for WWE in 2018.