Leave us your feedback to AEW All Out.

NOTE: We will do our best to get to as much as we can but cannot promise we’ll get to all the feedback.

The All Out POST Show will be streaming live immediately after the PPV: 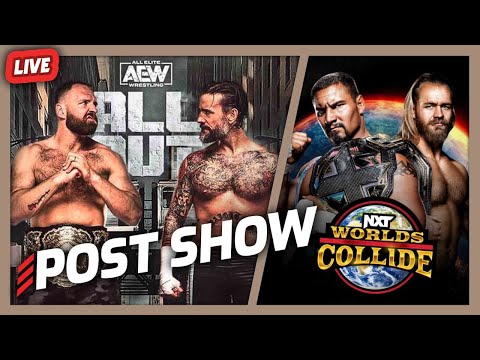 Opening angle / closing show angle were perfect bookends to this show. Made this show feel much more memorable than without it.

A great main event really saved what felt like a very middle of the road. Punk and Moxley had the crowd for the entire time.

Other than that I’m a big AEW apologist, but this match just had way too much stuffed onto the card. (One trios match too many - I’m looking at you Jay Lethal).

Trios Final was terrific too.

Felt the show was lacking a fun plunder brawl, that I really think would have helped the Sting, Darby, Miro vs. House of Black match.

Overall a mid level show, but again a great finale to the card with the the MJF return helped elevate it.

MJF having the crowd chanting for him over CM Punk, moments after Punk regaining the Championship will certainly be a great talking point come Wednesday for Max.

I saw so many people after the tag title match say that Tony should have called an audible and put the titles on The Acclaimed. The following AEW Womens Title match was the perfect reason why you shouldnt make an audible like that, because Jamie Hayter was getting a similar reaction. You can never predict how over someone will be on any given night. Now that we saw what kind of reactions The Acclaimed and Jamie can get, I hope they build to those eventual ttle wins.

As with every AEW PPV, way too long but man was that ending was perfect… For about 2-3 hours were had twitter detectives going second by second trying to decipher the joker.

No DQ when they pulled Athena out of the ring? And now 37 - 0 how long do you go? Is there anyone that comes to mind that would make sense to beat Jade?

JR adding 60lbs to Keith Lee. 400lbs? That tag match had the Acclaimed so damn hot that I was hoping an audible was called and the title switching hands. Loved that Keith Lee turned a bit heel with this crowd to just add to this match.

Lastly, Ruby took a beating today. Dumped on her head then ending with a broken nose. Hope she recovers quickly!

After seeing the full card for all out, the interim 4 way world title match was the only thing i was looking forward to. Wasn’t a fan of this show, the tag titles, trios titles, and 4 way were the only matches I liked on the card.
With the tag tile match being the match of the night.
Was really rooting for Jamie to win but Toni will make a great champion. The mystery surrounding who the devil was kept me around and I’m glad to see mjf back. Im assuming we get the title match at grandslam?

Lastly saw a report that said malakai blew a kiss to the fans and bowed to them, I hope he was given the time he needs to focus on his mental health.

My stars, that was a long show… And, it was Heels night in AEW, all Heels don’t pay the cover charge!

• Glad MJF is back, though the casino ladder match cameo was predictably him when it happened. The voicemail from Tony Khan, and the reveal was super solid. I’m looking forward to where this is going.

• Either the crowd was tired, or there was a bit of Punk fatigue.

• Good for Toni Storm, and I hope Jayme Hayter and Britt Baker get their shot at an MJF/Wardlow or Diesel/Shawn storyline.

• The Acclaimed vs. Swerve/Lee was five stars.

• A little sad Jade won, but her match with Athena was the best she’s had and is a positive sign for her future.

• Riley, Dax’s daughter picking up a W over Dutt was cute.

• Kingston vs. Ishi was so damn good.

• JR went missing during parts of the show, not sure if that’s intentional, but it was kind of weird. Schivone and Taz’s chemistry is great too.

Punk just went nuclear on Hangman, the EVP’s Colt Cobana, and a little of MJF.

Doesn’t seem like he’s long for working in AEW, or anywhere else.

I know there’s a lot so I’ll try to be short.

A decent weekend of wrestling from both WWE and AEW, yet I do think when it comes to trios matches, AEW has WWE beat. A good trio title finals match with great near falls by John Silver. I like that Silver continues to be highlighted, despite taking the loss.
I really enjoyed Omega looking straight into the camera and telling the guys in the back to top that… and the tag title match did just that.
The Acclaimed/Swerve in Our Glory match was easily the show stealer. The Chicago fans were that special sauce to take an already well laid out match to that next level.
Danielson vs. Lionheart: MEH.
Mox vs. Punk: GOOD.
Ishii vs. Kingston: TREMENDOUS

Thanks for all the hard work guys!

Because I am a fool I took a chance watching All Out at an AMC theater again, and for the fourth time in a row they forgot to order the PPV so we missed the first ten minutes of the first match. Then the picture went out completely during Hobbs and Stark so we missed that completely. With that being said, I still enjoyed my time tonight, and thought this was an outstanding PPV. I thought the MJF involvement was intriguing, and while I was surprised to see the belt back on Punk, I’m happy with the direction they seem to be going.

Match of the night for me was Swerve/Keith Lee vs The Acclaimed. Wasn’t expecting it to be as good as it was and I loved every second of it.

Question, who do you guys think had the worst chopped up chest of the weekend?

The Acclaimed and SIOG stole the show tonight! Amazing to watch the continued growth of The Acclaimed this last year.

Punk and Mox was okay. I feel like the post show comments from Punk soured me on the finish. I was happy to see 10k+ Chicago fans cheer MJF right in Punks face. Just tired of Phil Brooks the person.