Tune in at 10:05 p.m. ET for Rewind-A-Dynamite and leave your questions and feedback for the last portion of the show. 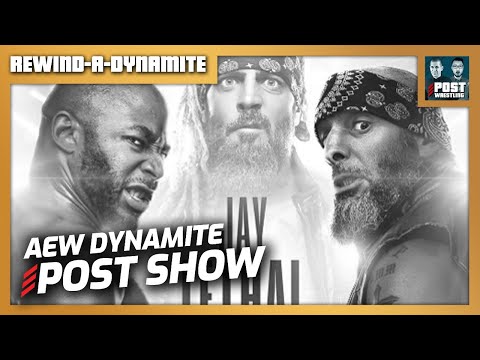 Give me Samnmy vs Action for 20 minutes please… what a killer opening 7 minutes.

Im so over the Ethan page / Hardy story line… keep it to dark if it must go on.

After Takeshita and Bandido this definitely felt like a downgrade for Danielson… but was still good. Next week will be gold.

Guess its a weakness of former wwe stars to get distracted by entrance music.

Emotional mainevent, lovely crowd. Amazing way to end it with everyone on the stage.

Tell the ones you love, you love them.

There is still frustration, as I’m sure there is from a lot of us, towards WBD. That this is how Mark finally made his AEW debut, rather than alongside Jay years ago. But tonight clearly wasn’t about the negative. It was about the positive. It was about love, about family.

I will forever be in awe of Mark Briscoe’s strength and envious of his conviction. To be able to go out there and do what he did tonight, just eight days after his brothers passing…on his birthday no less? That was a special, special moment.

A great show with a number of great matches, but I’m here to talk about the main event. Since I first saw ROH a decade plus ago, instantly and to this day Jay Brisco was my favourite performer in that company. So this main event was very difficult for me, but yet beautiful. The emotion on both men’s faces, going out there to kill it, the Jay driller, Marks comments to the camera and of course that post match. I was an emotional wreck, but it was a wonderful way to cap off the night, and I’m just so happy we got it. RIP Jay.

Mark Briscoe is one strong dude. I don’t know how he was able to have that match. Jay died a day before Mark’s birthday, and he wrestled on national TV for the first time in a main event match on Jay’s birthday. I was an emotional wreck for him, while he displayed incredible poise and pride throughout the match. Putting aside the frustrations with WBD’s stance on the Briscoes, I’m just glad that Mark was able to have that moment, and that Jay’s video package got to air.

Life is too short. There’s moments where someone may cross your mind that you haven’t heard from in a while. There’s nothing wrong with reaching out to them. Tell more people that you love them more often. It’s better to give people their flowers while they can still smell them, than after they’re gone.

You guys at Post do amazing work, and if you don’t hear it tonight, you’ll hear it from me, thank you for what you do! Take care!

Very entertaining opener, solid Darby match, and I’m looking forward to both Danielson/ Thatcher and Mox/ Hangman 3 next week (thought that one would happen at Revolution, so I’m curious to see what happens).

But tonight was all about the main event and I don’t think it could have been better. Gutsy performance from both men and a wonderful moment at the end. Bravo to all concerned for making sure this made it to tv.

I know there was plenty that happened tonight, and a lot of stories were advanced, but the only thing I can say I’ll remember was that main event. The entire experience was simultaneously heartbreaking and beautiful. To see those guys go out there and honor Jay in the way that he made his mark on the world was amazing. It’s painful to know that he’s gone, but to see all of those men and women who’s lives were impacted by Jay Briscoe in some way be able to honor him publicly on that stage was fantastic. From Jay Lethal clearly fighting back the urge to cry the entire match, to guys like Chuck Taylor and Hangman not even being able to hold back their own tears. It’s was beautiful to see Jay Briscoe get the type of public acknowledgement that his life deserved and for the people whos hearts he touched be able to have that experience. The ending of the match was the only ending that made sense, and I hope we get to see more of Mark in the future. Rest in peace Jay.

What a tribute to Jay Briscoe. The tribute video got me emotional. Incredibly well done, and whoever put it together deserves a huge pat on the back.

Seeing the emotion on jay lethal’s face on his way to the ring and before the match was toigh but so engaging. Seeing Mark Briscoe in an AEW ring to pay tribute to his brother and family was all i hoped for and the pain in his eyes was definitely captured.

The post match pulled at heartstrings as he looked into the camera and spoke to his family and brother. Havent ever left feedback but this is one I wont ever forget.

Also having Ian and Caprice on commentary was perfect and they added so much history and stories about Jay and his family. A nice touch and a big Thank you to Tony Khan for making this happen!
Thanks for everything you guys do!

Mark Briscoe has unbelievable resolve to work this main event a week removed from Jay’s passing. Tony Khan deserves credit for pulling the strings to make this happen. Mark hitting the Jay Driller was a perfect, cathartic ending. I bet the tag titles will be vacated going forward (possibly for Supercard of Honor via a tournament leading up to it) and the Jay tribute video was beautifully made.

Danielson/Cage was a slight step down from the last couple matches Bryan had. I feel that the JAS has run its course, Perry and Hook are better suited as solo stars and the outsiders vs homegrown women’s feud is doing no one any favours, including Jamie Hayter (who is the champion!) does it make her an afterthought?

It’s a shame that I never knew about the Briscoe’s until this year and their battles with FTR… they made a fan very quickly of me and it’s so sad to think we have seen the last of them together.

I have no idea how his brother kept it together… that man is tough as nails physically and mentally after that… a beautiful tribute.