Post your feedback and tune into Rewind-A-Dynamite at 10 p.m. ET. 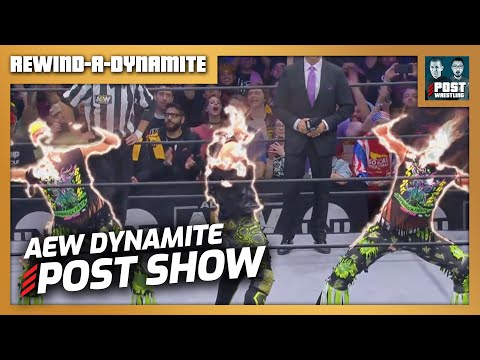 Right after Dave said MJF didnt want to go heel… next show they said f that.

Another wonderful promo by MJF, friend was impressed.

Very fun show, match of the night for me was Swerve and Glory vs FTR and friends favorite match was Sammy vs Danielson. He couldnt take his eye off the tv and the picture in picture during the ad break.

He did ask to watch again next Wednesday! We got a new fan!

I definitely didnt except that ending.

My biggest question coming out of this show is how long does The Firm last from here? Without MJF as the star of the “group”, it’s future is very much in doubt. I will say they’re left with some intriguing options though.

A. Let the group die out relatively fast after MJF and the BCC get their revenge.

B. Try to elevate Ethan Page or Morrissey to a permanent upper card position.

Do you see any other options for the group? If not, which of the three do you find more likely? And does anyone spring to mind of who could join the group as their new star?

An entertaining Dynamite as ever, but I was very disappointed that Hangman Adam Page got nothing more than a passing mention on commentary. It bothers me both on a moral level, as that was a very scary incident last week, and on a storytelling level.

It’s not enough to just promote matches and events, you have so spend some time reflecting on them. Make it feel like we saw an important match last week, don’t just move on to the next thing. AEW has a real problem letting anything breathe.
Tonight we had a World Championship match and it didn’t feel important at all.

Another very strong edition of Dynamite, with the show feeling like it has been back in a groove since the Three Year Anniversary show. Swerve In Our Glory vs FTR was phenomenal, a fun main event, and Guevara vs Danielson delivered more than expected with the match putting a big spotlight on Sammy again, and him delivering big-time in the match.

Also gotta say that I think Renee Paquette’s introduction to AEW programming has been a success. It’s nothing groundbreaking, but her personality shines through her backstage segments and she feels much better suited for it than Alex Marvez or having Tony run from commentary to the backstage area in between every segment.

I assumed the MJF/Stokely situation was being built up for a swerve at the PPV where MJF would cement himself as a heel still, but the ending tonight felt like a definitive way of splitting him up from The Firm.

The big question I have coming out of the show surrounds The Elite. We saw the mysterious video package early in the show, and with it featuring Kenny & The Bucks being erased as well as the “E” in AEW vanishing, it came off as teasing a possible anti-AEW character turn for the group. I’m definitely excited and interested about their return, but the video felt… odd? What were your guys thoughts on the vignette and what it could possibly be teasing for The Elite?

Another focused show with a lot of strong wrestling tonight. My favorite moments may have been Claudio’s finishing sequence taking out all of the JAS en route to victory, and Bryan God Damn Danielson hitting a poison rana, then doing the Nick Diaz flexing as he made Sammy pass out for the win. Main event was solid but lacked drama given where things are going.

DAY AFTER EDIT: I meant to write Nate Diaz, not Nick.

The Firm attack at the end was straight out of the Attitude Era, and mid-00s TNA, and a few Dynamites of the past, but I liked the extra touch of showing the Blackpool Combat Club’s dressing room locked to explain why they couldn’t make the save. If MJF is going face out of this (and he felt very face during his promo earlier), I hope he doesn’t change too much.

Friedman not shying away from the surprisingly positive reception tonight almost had me buying it. I bet at Full Gear, he’s gonna pull the wool over everyone’s eyes, even with The Firm attacking him and Moxley. It was a strong episode with very good matches. FTR/Swerve In Our Glory set up the tiebreaker vs the Acclaimed. I was pleased with the BCC’s clean sweep against the JAS, despite their ongoing issues. Claudio’s hot tag offence was reminiscent of that string of offence from his WWE run (if you know, you know) and the main event between Moxley and Penta was well done.

Does anyone see Adam Cole (health permitting) face off against Jericho next week? (He’s the only 3 time ROH World Champion)

To beat the already dead horse of Punk vs. the Elite… The “Punk’s side” appearing on the same day as the Elite teaser and return backstage seems pretty choreographed. Some of the shit that doesn’t make sense in his defences.

If he felt that the Double or Nothing match with Adam Page was going to become a real fight, that concern should have been quelled after it didn’t. Also makes his return promo call-out of Adam Page seemingly more immature and unprofessional.

The “self-defence” law for feeling threatened seems like something that came out of a conversation with a lawyer. And is a pretty selective take-away.

I now feel the dog is the only victim in this whole backstage kerfuffle. No one else.

The only thing I do have sympathy for is that CM Punk was away from Wrestling for 7 years, he came back and was celebrated for it. And within 1 year after returning managed to undermine himself, his colleagues and the promotion. He turned all of the fan’s and media’s goodwill and wasted it on being petty. The Elite, I am sure have their issues as well, but aside from Hangman Page’s one promo, the Bucks and Omega weren’t running to microphones and cameras to air their grievances.

It’s extra shitty that all this happened and we didn’t get to see any of them in Toronto. As a fan, that’s how I feel cheated.

Now, going forward… I really want to see how the Bucks and Omega can work this into an on-screen story.

The FTR vs. Swerve in Our Glory match was fucking great. Swerve and Dax’s striking exchanges felt really stiff at times.

Danielson vs. Guevara was great, but at times kind of felt like a punishment, or Guevara was trying to prove something, because. Danielson was really laying in on his strikes, chops and kicks.

Hayter vs. Riho was decent. The Saraya, Baker and Renee segment was weird and didn’t do a whole lot. 40 seconds of wasted time. This “WarJoe” vs. The Kingdom thing is as flaccid a program as it gets. And poor Wardlow’s TNT run has been pretty weak so far. Joe vs. Jericho needs to happen at some point, so maybe they can move the ROH TV on to some that defend it on Dark and Dark: Elevation until ROH has a TV deal. Let Joe go after the ROH title and be the one to end the Ring of Jericho era. I adore Claudio, but I’d love to see him going after the TNT or world title and having great matches vs.

MJF working the crowd into big energy call & response interactions during his promo has massive Rock/Jericho/Cena vibes. If it’s a “swerve” (no pun intended) and MJF is just using the Firm (without their knowledge), or employing (with their knowledge) to heel on him to get some nuclear heat at Full Gear, then cool.

Seems like it could be similar or based on the Rock’s King of the Ring 1998 heel-to-face-to-heel and “Corporation” reveal. “The Firm” sounds a little similar.

Except, the Firm needs to drop some folks… The Gunn’s & W. Morrisey need to go. Stokley is great, his wardrobe choices for a heel stable manager have been suspect, that cardigan last night was bad.