Leave us your feedback and tune into Rewind-A-Dynamite at 11 p.m. ET. 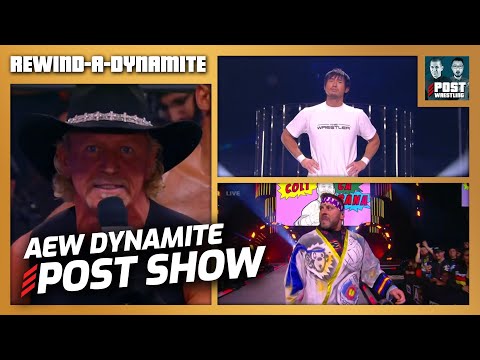 Maybe it’s because my football team was just badly beaten in the champions league and I’m upset but I think AEW is on the board of jumping the shark for me. This feels like a show who’s being run by a bot on shuffle, dozens of titles no one cares about, constant ex WWE has beens like Jarret debuting and taking the time of underutilized talent like Miro and Starks and then complete random stuff like Rick Ross and Shibata. I quit at the Nyla and Jade segment. Sorry but we already had a TNA and I don’t want to watch another one in 2022.

Maybe Tony can get me back when he stops having Dynamite being ROH 2.0 and go back to actually producing a good, enjoyable and coherent wrestling show.

Sorry for the rant but it’s disappointing to see the alternative turning into such a shit show.

I saw a dear while golfing on Sunday.

I unfortunately caught COVID and either I’m hallucinating or Mike Tyson is gonna call a Orange Cassidy vs. Shibata match live on TV.

Good show overall tonight, I throughly enjoyed the cameos tonight, I missed the Double J one but that’s OK.

Is it just me or did Rick Ross give off the vibe that he could be the next Million Dollar Man?

Ps, if I wore a post wrestling shirt at a fucked up show, would that be cheesy?

This show felt like a fever dream. AEW has a history of random appearances. Juventud, Glacier, hell Ricky Morton did a Canadian Destroyer (who hasn’t?) on Dynamite once upon a time. But I certainly didn’t envision Jeff Jarrett, Colt Cabana and Shibata all being surprises on the same show without Joey Janela promoting it.

I don’t know what I might get in person for Dynamite next week in Boston, but I feel confident after tonight in saying it at least won’t be boring.

I was iffy about this episode at first but it got stronger as it went along for the most part. I feel sorry for Lee Moriarty, who had a strong showing against Mox while the entire crowd was looking in another direction.

Shibata was a genuine shock and, wherever you fall on the Punk vs The Elite war, I think it would be hard to look at Colt Cabana’s face when he came out tonight and not be moved.

Perfunctory grumbling about the framing and timing of the women’s match… Whatever, Jade and Nyla is a fun feud and I’m looking forward to the title match.

This episode was all over the place. Starting with the Man with more lives than a cat, Jeff Jarrett, a Post-CM Punk Colt Cabana appearance, Rick Ross (who was refreshingly engaging), Nyla and Vickie doing live commentary, Shibata being signed to a championship match, No MJF, plenty of The Firm and a Brian Cage main event, my brain is completely overloaded.

As much as I enjoyed most of these things individually, it was too much to keep up with for one show. Full Gear is 3 weeks away and there’s a tournament that has yet to start with only two known participants announced. Mike Tyson is supposed to call a Shibata vs Orange Cassidy match on Friday. And now we have Foam Scissor Fingers!

Too many things in one episode. It’s exhausting.

Not the best Dynamite I’ve ever seen, but an eventful one.

Jeff Jarrett is the new Director of Business Development. I can at least understand this, given the pedigree and experience…what I don’t understand is seeing Jeff Jarrett on TV in 2022. Nice physique though, as John noted earlier. But what the fuck, Tony Khan?!

Shibata on Rampage, and no World Series baseball on Friday, means I’m watching Rampage for the first time in a while! Does this mean Mike Tyson is going to be on commentary for a Shibata match?! Tony Khan, I could kiss you!!

Following AEW sure is conflicting. At least it’s never dull.

Adios…though I’m sure you’ll be back commenting in no time.