Leave your feedback below and tune into Rewind-A-Dynamite immediately after the show. 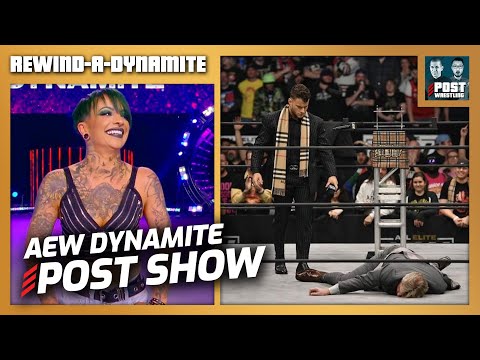 As I sat in my Elite jersey tonight on the edge of my seat for Game 3, there was a little too much pomp and circumstance from the Elite coming out of the locker room down 0-2, but you know what they say, series doesn’t start until the Home team loses.

They should lean into the MJF Reigns of Terror. It’s cute.

Cowboy Shit made Dynamite feel like Dynamite again. You know what else did, no ROH.

What’s up with Hulu Live Shadow Banning AEW Dynamite. Couldn’t get it to come up without searching explicitly for it. Weird since it’s always showing me other wrestling content to watch (notably Dark Side and A&E).

Did you ever consider that your theme song for Rewind-a-Dynamite has lyrics “where we’re going we don’t need Rhodes” and we actually have been going without Rhodes for some time now? How prophetic.

John, the anyting-but-the-wiggles story from the other day had me belly laughing. Not going to deny that I then went out and YouTube the Wiggles; Fruit Salad is catchy but those guys are like adult Teletubbies without masks. A bit creepy. Did I YouTube the right thing? My algorithm is going to be so messed up

Working late so appreciate the post show. May there be peace when you (and I) are done.

Strong opener and main event. I really liked the different approach to the trios match to make it different from the first two matches.

Was it me or did it sound like no one really cared about MJF and his promo and even less cared about Jade? I thought dom and rhea got more heat.
Not sure but thats how it came off to me. I definitely think no one cares about bow wow. What does that even lead to?

Its good that there looks to be alot lined up for MJF.

Thanks for everything guys. Its appreciated

Saeed from Vancouver, im back!

A fun Dynamite that flew by… especially the first hour.

I’m going to safely assume is that the medical staff does things wrong on purpose when it’s not a real injury, but I’m curious how Regal got busted open.

Dax vs Danielson was match of the night for me.

Im scared to see where this Bow Wow thing is going…

Love seeing them building matches for MJF, we now have Starks, Kingston, Danielson and the winner of the battle royal.

Another Fun main event, anyone who thinks these 6 cant keep it going for 7 matches is wrong.

And welcome back Hang Man!

That was the best episode of Dynamite in a long time.
From the amazing opener to the incredible main event!! Great MJF segment.
Wish it was a bigger crowd but they were an awesome crowd.
Really happy to see Ruby Soho back. She’s is what the woman’s division needs to freshen up.
9 pre rolls out of 10.
Looking forward to MCU Later tomorrow.

Great night of wrestling! Really thought Hangman Page looked strong in that pull apart, getting the best of Mox and really laying it in!
Dax and Bryan had an incredible match! What a pleasure watching the sequence these two pros perform in that squared circle! It’s art!
That MJF promo was long, stretching to reach that hour mark, obviously. Even after laying out Regal, a significant number of fans won’t boo MJF like the heel he’s made himself out to be. I think that does matter in the long run when you need a clear baby face to chase and he’s getting a mixed reaction next to MJF.
The main event once again delivered and this time more focused on the story and the wrestlers than any reference to the backstage issue and I’m glad for it.

Do you guys think Eddie Kingston gets a program with MJF next year, and do you see money in that match? Thanks!

While not as strong as last week’s show, which I thought was one of the best Dynamites of the year, I still found this edition to be a rather strong one, with a hot opening segment featuring the surprising return of Hangman, a great match between Dax & Danielson, and a killer main event that once again proved that The Elite & Death Triangle are more than capable of making a Best of Seven Series not only feel special, but are able to make each match feel different.

The two big questions coming out of the show, at least for me, are Regal’s status as the attack from MJF could be seen as a permanent write-off for Regal or a temporary exit before returning for the impending Danielson vs MJF feud, and whatever is planned for Jade and Bow Wow, either him aligning with Kiera Hogan, an intergender match that nobody needs, or something else.

Kenny was sending the crowd home happy with an ‘enjoy pro wrestling’ promo before the FITE feed cut.

The main event saved what I thought was an otherwise bland show. Solid opener, but Joe looks slow, and I think MJF takes 10 minutes to get across 5 minutes of material. Starting the main event with a wild outside brawl that certainly didn’t slow down during commercial breaks kept me interested from the jump though, and the mini stories like the hammer or the long-running one-upsmanship between Nick and Fenix are great threads to watch. And I loved the ending. Tony was putting over how difficult the mask was making things for PAC, and the way he sold those knees on the way down looked brutal, so I totally bought it as worthy ending.

PAC really sold me again here as one of the top guys in the world; on offense, selling moves, his character work, he’s the best. I’m actually pumped for a week off of the series so both teams can sell the win and the loss and fire up the whole thing again for Winter is Coming.

Harwood vs Danielson was match of the night. Match 3 of Elite vs Death Triangle comes damn close. MJF’s first promo as world champion did its job of getting heel heat, despite being a little long-winded. I had a gut feeling he would jump Regal since he doesn’t need a mouthpiece. Hangman Page returning was a nice surprise and I bet we can pencil him and Moxley for Winter is Coming.