Last week, somebody called into the café stating they were visually impaired & not able to see the picture in picture. I suffer from the same issue & I realize i’m in the minority, but I just have no idea what happened. Seemed like Jericho & Jungle Boy were getting 5 more minutes & no idea what happened with Pac & Omega Thank goodness I have cowboy and the DJ. Not sure how I feel about the alien gimmick, but I thought Chris Statlander looked excellent. Not only do I not understand what Brandi’s character is supposed to be, but I don’t care for her at all as an onscreen performer. The show felt average for me. 5.

Tonight felt like a PPV. A good PPV at that.
Storylines developed, good pace, great wrestling.
I’m happy to see Statlander as next in line, Britt was not doing it at all.
Things feel like they’ve started to click and the company is actually listening to fans.

I’m confused about what they are doing with Spears & Tully. Last week they were pushing Spears getting a partner, but then his feud with Janela continued. This week they pushed the partner again, but no talk about Janela. They dont need Spears in the tag division, with so many solid and established teams already. I’m really disappointed, because I thought they were actually going to give him a decent singles run.

I’m glad Statlander won, Baker is still terrible. The end of SCU & Bucks was underwhelming, but I loved the end with The Dark Order beat down. They’re really teasing Hangman possibly joining. I think Daniels as the Fallen Angel character, would be a great fit for them as well.

Worst episode of Dynamite yet. The wrestling as usual was fine, but the quality of booking in AEW has really declined. PAC attacking Michael Nakazawa in the back and Kenny chasing after him was pure WWE. Jericho vs. Jungle Boy did not need interference and should have ended with Jungle Boy tapping out with only a few seconds left on the clock. Main event went way too short given how good the match actually was. Looks like the Dark Order reboot has already jumped the shark. Crowd didn’t seem any more into them despite the weeks of vignettes. Strangely enough, I don’t mind the Brandi stuff so much, possibly because I don’t know where it is going and a lot of the other stuff is too predictable.

I’ve watched every episode of Dynamite so far, but I may peace out for a while until things change.

As always AEW delivered an enjoyable two hours in their final show of the decade, nothing stood out as unbelievable however I thought everything flowed really well and I enjoyed almost everything. Big props to the crowd tonight, especially for a city with the reputation that they have of being on the quieter side. 8/10 show from me

I went over to a friends to watch both shows on multiple screens tonight. Wrestling TV Hack: watching AEW without commercials. What a difference. Angles play out, additional promos, matches with commentary. Few crowd shotts. It feels like a Network special or ppv.

Also, they had a lil bit of the Bubbly. It comes with instruction on how to post and tag it in social media. Also a letter from Jericho. You’re welcome. 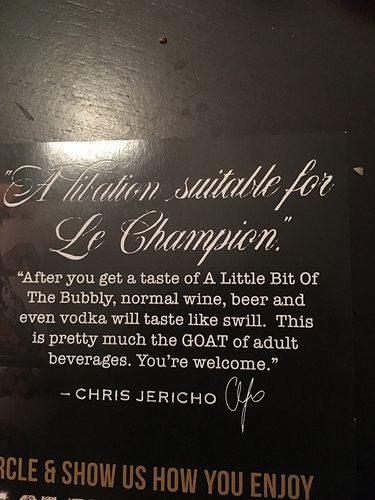 Really fun show over all. Every match was fast paced with captivating action throughout. So far I appreciate AEW’s slower approach to storytelling. They’re not dropping too much information in one promo dump the way WWE programming tends to. Things like Jungle Boy lasting 10 minutes and the slow rise of Dark Order make me want to come back because it feels like things move forward and characters are advancing week to week. I thought Chris Statlander continues to be a standout and captivating performer.

Totally enjoyable 2 hours, with a fantastic main event. Where has Scorpio Sky been all my life? It’s a pleasure to get to watch Nick Jackson each week. All his high-flying just looks so great.

Darby Allin needs to be the AEW cover boy ASAP. It’s too bad they don’t have a secondary title as I think he would make an awesome IC champ.

The show wasn’t all good. I can’t get into the women’s matches at all, and the booking is really confusing to me. Can anyone tell me if Britt Baker is the star of the division or not? She sure seems to lose a lot. Nice of Riho to show up.