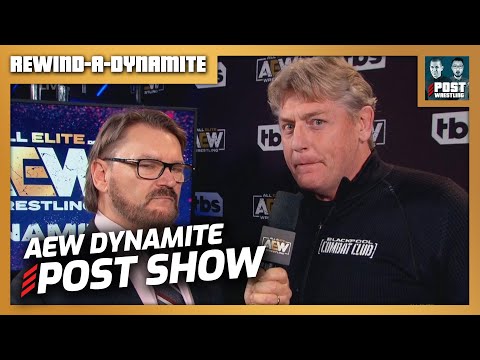 Ricky Starks really impressed me tonight. Watching him go toe to toe on the microphone with MJF while his hometown crowd went wild was a great moment. I’m really looking forward to the title match next week.

Ricky Starks’ rebuttal to all of Friedman’s low hanging fruit insults was excellent. I thought going in that the Diamond ring was gonna get defended separately since he has the world title. I guess not since it’ll be winner take all…does he know that he can’t have everything?

Regal’s final promo was as good of an exit that i can ask for and I hope this JAS/BCC feud comes to an end at Final Battle. It has dragged on and on for months.

FTR/Acclaimed was the match of the night and I loved that it was a skin-of-their-teeth victory for them.

Top Guys and Dem Boys going at it one final time in a dog collar match is gonna be worth the price of admission.

Thought tonight’s show continued a streak of very strong Dynamites, with Chicago two weeks ago, last week, and now tonight. Incredible promo from Ricky Starks, probably his best since joining AEW and it really made him feel like a main-eventer. It was also very nice to hear Jamie get to speak on her own, and them setting up Hayter vs Shida could be a truly great match to kick off this reign.

Thought Joe vs Darby was fantastic, but the MOTN is without a doubt The Acclaimed vs FTR. They tore the house down in what has to be Caster & Bowens’ best match of their career.

Also, even with Rampage not having a super thrilling lineup, it is nice to see a continued increase of women’s division stuff, with Rampage this week now featuring advertised segments/matches for Athena, Tay Melo, Ruby Soho, Hikaru Shida, & The Bunny.

Credit where it’s due. The crowd tonight in Austin took this show to a different level. Add them to the shortlist of cities where a hot crowd should be expected, they earned that reputation.

That said, I thought AEW responded well to a concerning prior week. Not only with this show, but clearly treating Rampage with more respect. And how could it not be a thumbs up show when they hit you over the head with the idea of the BCC-JAS feud finally ending!