Post your feedback to AEW Dynamite from New Orleans. 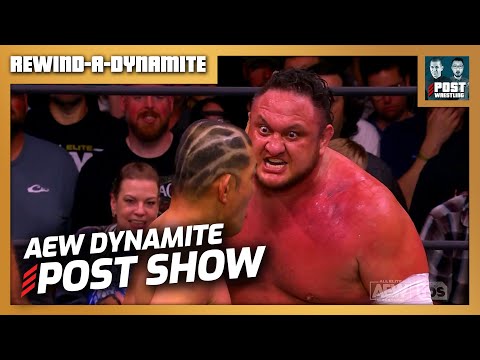 The debut of Satnam Singh as a heavy for Lethal & Dutt did not instill confidence in me for Lethal’s feud with Joe. I thought it was a bad way to follow up such a hot main event and hot show overall. I don’t want to overlook all of the highlights this episode provided, from the tag title match, to Ricky Starks’ massive hometown hero reaction and subsequent match, to the continuation of the Wardlow story. Relieved that Punk and Penta recovered from that scary top rope spot and finished their match well.

This show moved along at a RAPID pace, but pretty much delivered across the board aside from some hiccups.

Loved the Toni/Jamie segment as it felt like a strong way to build towards this match as something special, while building off their history, showing Toni’s confidence, and tying their time in Japan to Owen Hart’s own time in Japan. I thought this was a great direction for the women’s division. Marina vs Skye was a match that existed. It was nice to see Keira Hogan & Red Velvet seemingly align with Jade, but thought having Cargill come out after the match to confront Marina would’ve done more to make this feel important. If this is a faction, I’d love to see Sonny Kiss get added down the line.

Lee & Swerve vs Hobbs & Starks was my MOTN, with all four men making great cases at being main event stars for AEW. I was worried when Taz came out that we were getting a swerve with him turning, but happy to see Team Taz get the victory.

It was surreal to see Joe battle Suzuki, thought the match was good fun but the post-match just felt weird. Using the lights out, lights on indicated a huge surprise but nobody knew who Singh was.

Any guesses on what Tony’s next Huge Announcement could be? With the timing of the New Japan World partnership, I think the long-talked about New Japan/AEW show could be a strong contender.

This was a really fun show with great matches until the end, which seemed intended to build hype to a guy nobody recognized and end with “heat”. I’ve got no time for Lethal for Speaking Out reasons so I was already grumpy. Maybe Satnam Singh will be great, but the lights out reveal didn’t work here. The match itself was good, also I loved the closing stretch of Punk/Penta as well as the Eddie/JAS tag. Sad that on a show that found time for so many matches the women still only get a short squash and that’s it. 8/10

New Orleans was lively from start to finish. However, the Shafir/Blue match was dead quiet and the post match angle with Lethal and Joe didn’t justify the overrun. That being said, the rest of the show was entertaining. Joe/Suzuki was very fun. Punk/Penta was dope, despite that scary botch. Team Taz vs Lee/Swerve and Jurassic Express/reDRagon were well worked.

AEW’s habit of not letting things breathe is an issue.

Loads of fun tonight, marred by a flat ending. It was hard to tell who was the most over because the crowd seemed hot for a lot of people, but I think the biggest pop of the night might have gone to Wardlow.

I think my favourite match was Team Taz vs Swerve and Lee, which was just spectacular. All four men felt like stars and it seemed like the crowd, while they wanted to cheer the hometown antihero, was into everything.

I was thinking that the tag belts might change hands tonight but it seems like reDRagon are shifting focus to the ROH ones. Do you see any more titles changing hands this week? Or is Joe the only #andnew ?

Best sign of the night… “MJF puts tomatoes in his Gumbo,” a 6 star classic.

AEW got their own Great Khali !

The Wish version of Khali!