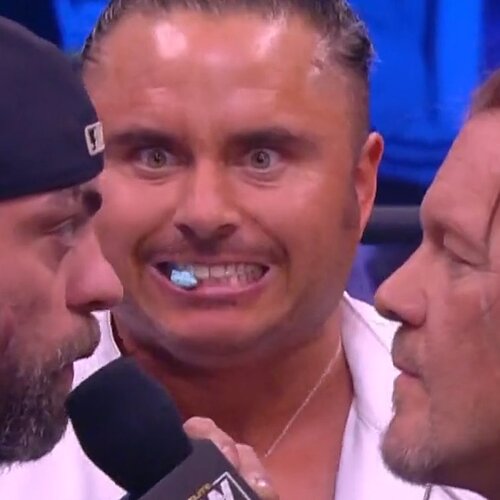 As per usual, there was a LOT on this show. But what an enjoyable two hours of wrestling.

While it might not have been the original plan, I think we got the best outcome for the TNT title picture. Sammy is a heel, as he needed to be. And Scorpio gets another big moment on Dynamite, as he needed to have.

I’m also very excited to see who joins up with Kingston and Proud and Powerful. With Jericho emphasizing the numbers advantage, the only question seems to be will it be a duo who are already established within AEW, or new arrivals?

Why did they end Sky’s undefeated streak just to give the title right back to him? What purpose did that serve?

While there have been some entertaining matches, I think the booking of the TNT Title has been a mess since autumn when Sammy first won it from Miro. They should have just kept Miro as an undefeated TNT Champion for months and built to a TNT Champ vs World Champ match or something.
Which leads me to my next question,
Where is Miro???

First… So, much. This show has so much happening all of the time.

I love, love, love the MJF / Wardlow program. I wish Santana could have got more into his promo before Garcia cut him off… And the loving satire of WWE’isms by the JAS is pure fun.

Not Dynamite specific, but about AEW in general, I know we get backstage and some promo segments, and the wrasslin’ is great. I would love if some of the many, many talents could get more promo time, I was watching Dark and Dark Elevation this week and there are talents like Red Velvet who just turned heel, and the broadcast team has to do some repetitive verbal gymnastics to help explain her heel turn.

I’m game for a CM Punk title run, more for what it means for the Hangman Page character. For instance, Page loses to Punk, then he starts to question himself about his station and status, whether he was a “champion,” the way that a Punk has been a champion, or Danielson, or Omega and Moxley… He feels a bit of Imposter Syndrome and wonders whether or not, he’s really on that level, and that’s his road back.

Miro’s hurt, and on the mend. I get the impression that he could be back at Double or Nothing.

This crowd was good too.

I wasn’t crazy about the shenanigans in the main event match, not least because Paige doesn’t look like she’s quite ready for prime time yet, but I thought that the last part was really well done and made Scorpio Sky feel like a proper champion. I’m glad that they went with what the crowd wanted- Sky as a babyface and Sammy as a heel. It feels much more natural that way. Do you think that they’ll break up the Men of the Year to have them feud over the title?

I can’t figure out if Rampage is particularly stacked this week or if I’m just excited because it’s got a lot of people I really enjoy on it.

Thanks for all you do, as always.