Leave your questions/comments here for Rewind-A-Dynamite. DD+ patrons, join us live on Zoom at postwrestlingcafe.com

What did you think of Fyter Fest Night 1?

The energy the AEW crowd brings is incredible. This show feels like the hottest weekly wrestling program in decades.

Tonight reinforced the fact that everybody who felt hot during the Dailey’s Place shows were genuinely over with the crowd at home.

I’ve said it before - the closest comparison I feel like for AEW right now is WWF in 97. You’ve got a roster full of hungry future main eventers, a top tier main event mix and a promotion that is running on all cylinders to keep the audience watching. That’s why I am excited to be watching every week - I really feel like there is something special about this product that will be looked back upon in years to come.

I think what happened was Adam Cole came home last night and was really proud of the great promo he cut on NXT. But then Britt said “just wait and watch dynamite tomorrow and I’ll show you a promo”.

I hope they let the omega and page feud go a bit longer before the singles match.

Last weeks show I gave a 10/10 and yet this show was even better. Every single match was awesome and i’d go as far as saying that this was one of AEW’s best episodes of dynamite. but holy cow the crowd was really something special, I hope they return to Austin as a regular stop for them cause man were they on fire. EVERYONE came across like huge stars, specifically Hangman, Sammy, Darby and Moxley. Just an incredible atmosphere all night long.

Great crowd elevated a 8/10 show into the 9.5-10 territory. Top to bottom one of the best dynamites and best main events since the parking lot street fight. All the storylines are starting to pickup and materialize without treading water.

Also love to see a wrestling company give the fans what they actually want by opening the show w mox and closing it with Darby.

I have tickets for all out weekend and haven’t felt this excited for a wrestling show since all in.

Another fun episode. It’s a speedy flashy two hours of television minus the odd drag here and there.

I absolutely love king douche villain Kenny Omega. He brings an energy reminiscent of Bill Paxton’s asshole car salesman character in True Lies. I can’t get enough of it. In a world where so many wrestling heels want to come across like a Batman villain from the Nolan Trilogy or Todd Phillips’ Joker, Omega’s happy to be a Batman villain from the '60s TV show. Consider me entertained.

Now that we’re three years in with the Fyter Fest brand, I wanna know if you (John and Wai™) think the event needs a rebrand in 2022 or should AEW keep the name forever?

I was there live with friends and the atmosphere was so electric. I’m still here as of this writing for Dark Elevation. Dark was taped first.
MotN: Coffin match

Pop of the night: Everyone got a great reaction, but Darby, Mox, Jungle Boy (Elevation) and Britt Baker were near the top, but Hangman and The Dark Order was incredible.

My favorite segment was definitely Page and Omega.

If you heard “Jesus chants”, it was because Wrestling Jesus was in the crowd again.

Man what a show! And that crowd that a bow. It had everything you want in a wrestling show. New Japan strong style, hometown boy winning at home, fantastic promos, solid wrestling and a Ego’s edge I never want to see again 10 hot wives doing the splits out of 10

A hot crowd is the salt you need in a great recipe. It can make the difference between a decent wrestling show to a damn good wrestling show and that was what Night 1 of Fyter Fest in Cedar Park. Moxley vs Anderson set the tone and the Hangman/Elite segment made the building feel like it was shaking. Ricky Starks got over big time and the Page/Allin coffin match was chaos. It was a strong show with very little filler that flew by.

MJ
Once upon a time I stood up for a bunch of badly introduced characters. I said they’d be worthy of rivaling a top faction in AEW. Some wanted them banished from the company. Not worth continuing to build them. I am so proud to have Joined The Dark Order upon arrival in 2019. From the perspective of a fan who did buy in when the haters hated, and the Brody era, and now this Elite story being where it is, and Dark Order is a focus of it (also on BTE)…it’s so rewarding. The kind of rewarding that comes from a group of people who care about delivering for their fans. Wherever this goes next, I continue to believe in this brand of story telling. And isn’t it something that Kenny Omega vs Adam Page are the biggest match to be on the horizon in pro wrestling - anything you guys think rival it at this time?

Britt Baker is the new top Woman in wrestling, the forbidden door at this level of openness is lovely, and there’s no wrestling show on TV that comes close to this level of satisfying time invested week after week. I was there last week in Miami, I recommend everyone go when it’s in your area. See you in New York. The Elite rule. Mark, out.

Overall I thought this was a really good show! Its crazy how much the crowd makes a difference.

I know I’m in the minority, but I’m just not a fan of Moxley, I find it very hard to get into his matches, he is a great promo though. And why are we watching Hardy vs Christian in 2021, I had zero desire to see that.

I’m super excited to see Black in AEW, while Cody wouldn’t be my first choice, I’m sure these two will have a great match and I loved everything about tonight. Hangman Page is money, love that he is catching fire again. Really enjoyed the Darby vs Page match, they have something special in Darby and I look forward to see where they go with him.

Of the young core 4 (MJF, Darby Jungle Boy, Sammy), who do you guys see developing into the biggest star for AEW?

I just want to clarify, when it comes to Christian vs Hardy, I didnt think they had a bad match, I just had zero desire to see it. Similar to when we see a Cena vs Orton match, the in ring can be just fine, but after years of seeing it, you just dont care and are super bored watching it.

A hot crowd makes a huge difference and I don’t see any other promotion coming close to those kind of reactions.

I don’t see any babyface in WWE getting the reactions that Guevara and Allin receive. And no chance in hell anyone gets anything close to Hangman. Wrestling is simple, listen to the audience - AEW gets that.

The opener was incredible, that was the best Anderson looked in years. I also thought Hardy and Christian had a much better match than I expected. Main event was nuts and I loved seeing Starks get some shine, that guy is a legit future main eventer.

I want to see Hangman get pinned clean with the one winged angel in the 10-man tag and have Dark Order fight to earn their friend a shot. And you still have the doubt when they do Omega/Hangman that Omega can beat the guy. The subsequent kick out from Page when Omega hits him with the OWA in their match will be the biggest pop in AEW history.

While i’ve always enjoyed BTE and their general work i’ve never enjoyed The Young Bucks/Kenny Omega as much as I do now. Their style of obnoxious heel is pure gold.

This show is just on top of its game right now. I’m on the edge of my seat for 2 hours every week. The babyfaces on are so over in this company, because they know how to book them properly and it is so refreshing. The crowd makes it feel even more special.

I cant even imagine the pop when Hangman finally wins the AEW Title. It is going to be insane.

Went back and watched some 2019 editions of BTE. The story telling is fantastic.

How would you like to see the 10-man tag go? I think there are so many options they can go with. I’m not sure what they should do. It depends on if Kenny is going to have a title defense before All Out. If he is, I almost think Hangman should be the first one eliminated in the match and then the Elite just run the table on Dark Order and win 5-0.

Then maybe on the first Rampage, Hangman somehow earns the shot at All Out. 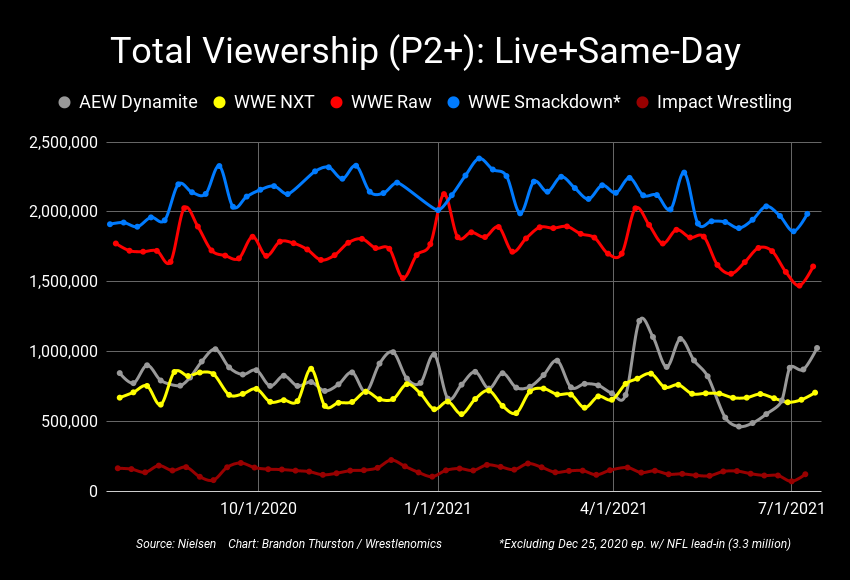 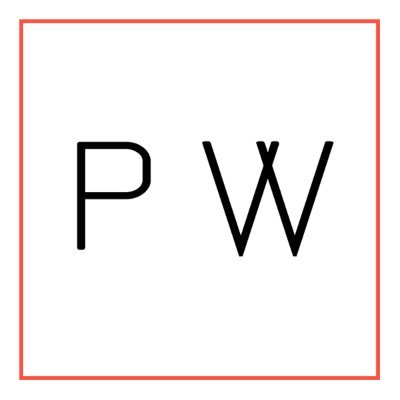 Keep in mind this was going against the NBA Finals too, what an incredible number. Glad to see quality programming is being rewarded. WWE is just so lost at this point

I usually stand on the side of most ratings talk is irrelevant because the sampling is too small and granular, but what I think at this point is inarguable is Darby Allin is AEW’s first legitimate and evidenced star.

Which I think makes next week super interesting, because I think there’s some pressure on Hangman Page to reflect similarly as a draw as the guy very obviously lined up as their next champion. It’s a luxury of riches for AEW to have two “new” stars who are super over as babyfaces, but they’re also very locked into a plan with Hangman being the next guy up which probably puts any chance of Darby being champion 9-12 months from now.

Ultimately it might just be that you can’t go wrong with either guy (and at this point, there’s absolutely no way you can’t put the title on Hangman first), but I wonder if in the extended time they took to get to the Hangman title match if another burgeoning face has started to lap him in television popularity and if the ceiling would have been higher striking when the iron is hot with Allin instead (especially since yesterday was another reminder that Darby Allin’s style and career is probably going to have a shorter arc than most). In fairness, Darby has had far more chances in that main event spot with all kinds of opponents to prove this true. Next week’s 10-man is really Hangman’s moment to shine and perhaps keep himself up at the same level.