Leave us your feedback on AEW Dynamite feat. CM Punk vs. Jon Moxley. 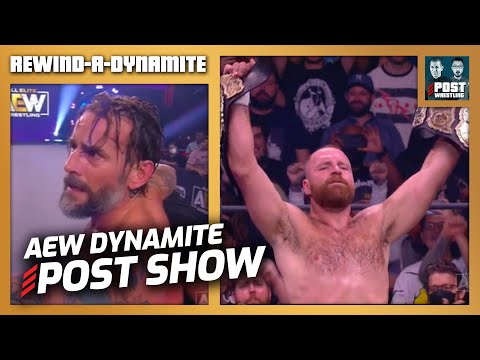 That was not the finish any of us expected for the MOX vs. Punk match. Mox’s post-match promo was decent.

BIGGEST THING… I love AEW, I love it exists, that there are more options for talent to get on TV and work. But, Tony Khan seems to have some kind of cognitive bias that impedes him from booking women fairly. Thunder Rosa is the AEW Champion, she suffered an injury that will prevent her from competing and defending at All-Out, and they’re going to crown an interim champ. This announcement happened in a 30-second backstage promo. Let’s just Rewind-a-Dynamite (pun intended) after Double or Nothing, Punk made a similar announcement, except he got to it in the ring, in front of the crowd with an entrance and pop. Yes, Punk is more popular than Rosa, BUT, they could have given her the respect of letting her address the house, in the ring.

Ricky Starks is gonna be a big deal. I feel like both he and Hobbs will come out of this feud bigger stars.

It’s good that FTR isn’t booked into a match with the cartoonishly melodramatic Dutt, Singh, and Lethal stable.

The Assboy vs. Dadboi match could have happened on Rampage, so could the post-match set-up for the tag title match with the Acclaimed and Swerve/Lee.

The Trios match was predictably good.

Danielson vs. Jericho should be a banger.

PS… Thanks, Bruce Lord for introducing me to Ulterior. I love a good bawdy batch of bangers, they got some.

Jericho x Danielson… Garcia on a pole match at All Out ala WCW Nitro?

Wardlow went from 100 to 0 pretty quick since MJF program and winning the TBS title.

Summer of Punk turned into the Summer of Mox and I am very glad he has the full title now. That look Punk gave Mox at the end has to mean Punk is returning at the end of All Out to take out the champ and turn heel? 1 week build for the main event at All Out?

Osprey just picking up where he left off from the G1. Thank you for the G1 review shows recommending his matches!

Lastly, you guys are not letting Wai get started slowly, have him join you for 5-6 hour show next Sunday. We just had 8 match announcements with more to come since the Mox doesn’t have a match yet. Can’t wait!!

Dynamite was a hot show as always with a hot crowd.

I agree with Benjamin, them announcing Rosa as injured in a 30 second backstage segment was disrespectful. At least do it in the ring. For the fatal four way, I can see Storm getting the belt before the rematch with Rosa when she gets back.

All out really shaping up to be a fun card.

The Trios match is absolutely a match of a year contender for me.

Punk and Mox match was a surprise not being the main event, but maybe the finish explains it?
Not sure if this is a work or not… but my friend that was near the front row, heard the doctor tell the ref to end the match, before Mox went after Punk and put the match away.

That was the slowest match announcements by Excalibur ive heard ever, he even announced battle bots faster.

Great promos and a phenomenal main event that sets the stage for some very exciting matches (the six man next week, Kip vs. Pac and hopefully Pac vs. Ospreay). Oh…and Punk vs. Moxley. Which I put right up there with the shock of Lesnar-Goldberg, Brodie-Cody, etc.

They set the stage well by starting it at the half way point of the show and mentioning that the match could go long (as they have with previous big matches on TV). Only to go with the story of Punk coming back too soon and losing in three minutes. Not something you could pull off as a PPV main event or had you started the match at 9:55 PM.

It’s an interesting enough story without the potential backstage drama being legitimate. But with that being a factor in everyone’s mind, it takes all of this to the next level. The questions of whether or not this was always the plan? Is this Punk’s punishment? Etc.

Regardless, it made for an incredibly shocking moment and cemented this as a Dynamite that will be remembered and talked about for a long time.

Thanks as always for the show.

A wild show with some expected and very unexpected turns to build to All Out. My biggest negatives about it came towards the end, with Kip Sabian being crammed into the main event, and no indication given as to what the World Title Match at All Out will be. Other than that, I enjoyed Death Triangle vs. United Empire more than last week’s Elite main event, I think Ricky Starks is cutting stronger babyface promos than Jungle Boy, and Punk vs. Moxley threw me for a loop, but I wasn’t disappointed in it. I thought it played out smartly, struck me as hopefully the first chapter in a longer story, and I’m happy to see Jon Moxley firmly take his place on top. He’s the most protected guy in wrestling next to Roman Reigns.

When they announced the title match for the middle of the show, I thought they were telegraphing a shenanigans finish, but they instead went with another three minute nightmare for Punk in Chicago. This was a wild, exciting finish to a show… except that it was business as usual after. I thought they may deliver a big angle at the end to top it even further, but they didn’t.

Rosa is one of my favourite wrestlers and I hope she comes back strong. I think they really bungled the announcement of the replacement four way, as when Baker and King got into the ring they presented Storm’s opponent as an uncertainty on commentary, but then flashed the graphic on screen.

Not interested in seeing Ospreay at all. Love what they’re doing with Garcia, he’s way bigger now than he would have been if they simply put him in BCC to start. 4/5.

People will love or hate the different approach AEW is taking to booking PPVs. It’s all in the journey thought right? If fans want slow but telegraphed stories made for 5 minute video packages that product exists. AEW has proven you can splatter a lot of stuff together to produce unique and exciting shows and ultimately have matches people want to see on PPV. It’s a product that disrupted status quo and has done things differently from having a first PPV with no TV to having no main event yet for this years All Out.

I think what rubs people the wrong way about some of this is how starkly different what AEW has been doing is. Consider the Forbidden Door build and the result of that show. The ROH ppv that was a commercial success after everyone wondered why it was being given time on TV. Because it’s different doesn’t mean it’s not working and that’s what a disruptive does.

It’s all in the journey.

Tonight’s journey featured a unique TV title match. And Will Osprey sharing a ring for 20 minutes with Pac and the Lucha Bros before having a hyped stare down with Kenny Omega.

Anyway wanted to leave feedback for Bruce. Always enjoy when he’s on. Cheers.

What a great Dynamite, the absolute result I wanted from that World title match I never thought I’d get, a killer main event, and as the biggest of Impact fans I absolutely marked out, edge of my seat and hands on my head for the Motorcity Machine Guns reveal. Can’t wait to see them at All Out! 9/10 show.

I saw it and I still can’t believe it… Jon Moxley had a match where he didn’t bleed!

It’s great that AEW is not afraid to make statements. When there’s a match between two top guys on TV, fans have become conditioned to the WWE booking of doing a non-finish to get to the next part of that feud. People predicted a run in from MJF or Hangman or something to necessitate adding a stipulation for a rematch. Moxley squashing Punk was the furthest from anyone’s mind. Completely shocking result and as of the end of the show, there’s no world title match booked or any indication of who’s next. This unpredictability is great, as I’m able to turn my brain off and enjoy the ride!

Thunder Rosa being hurt is another bummer, and a tough hand dealt to the women’s division after Statlander’s injury. On the plus side, it’s great to see Shida back in focus!

The show overall was fantastic. I’m glad to see The Acclaimed and Ricky Starks getting some PPV love, as they both are naturally over and are knocking their opportunities out of the park!

Easily one of the most chaotic episodes of Dynamite ever. I have no idea what’s going on with Punk and Mox. Rosa getting injured is a curveball. The Motor City Machine Guns vs FTR has to have been on a number of wish lists that people never thought they were getting.

The main event was tremendous. If Mox v Punk ran shorter than anticipated (which, given that the way they appeared to be stretching in the back half, seems possible), it also means that they likely had to fill more time than they originally planned. Unreal either way. Fuck physics, give me more like this.