Post your feedback and tune into Rewind-A-Dynamite LIVE at 10 pm ET: 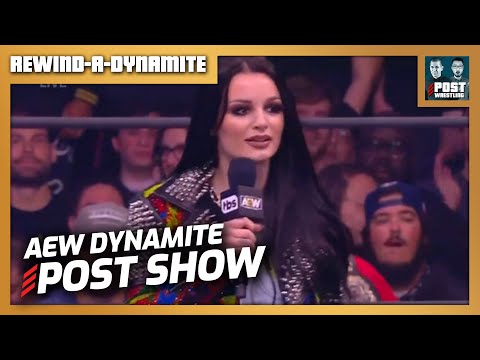 For me this was one of the worst Dynamite’s in a long time. The crowd was dead from pretty much the opening segment until the main event and we had a worst segment of the year contender in the Saraya promo.

Bringing her in as what seems to be a commissioner role is a baffling choice to me if she’s not cleared to wrestle and this segment absolutely died out there. AEW women’s division desperately needs new direction.

And lastly: Please no more AHFO, HFO or any other combination of this stable on television.
Don’t make me watch another tiring dissent segment between them.

And congrats to Wai on the new baby!

Ello guys! First time long time. I loved the show for the most part but the pacing was off? It felt like a taped show. The crowd was insane as always! I love seeing stars from other companies/ free agency. You guys are great keep it up!

Bandido gave a performance of a lifetime - and I hope he gets further opportunities within AEW.

Warner really told AEW to cut back that “shit” was bleeped out.

How do you guys feel about ROH having such a strong presence in an AEW show where there isn’t even room for AEW wrestlers.

Lastly, can we stop with biting open wounds?

*John called it… Jericho is going after every ROH champion

Dynamite finding it’s “old school feel” has been mentioned a lot in the last few weeks. I couldn’t agree more with that sentiment after this show. To say there was a ton of moving parts with a LOT of things thrown at the wall to see what would stick would be an understatement. Poor Excalibur with that rundown.

But as always there was some very solid wrestling, which brings me to my seemingly weekly praise of the year Chris Jericho is having. Here’s hoping this isn’t the last we’ve seen of Bandido as well. There was even a brawl in the stands. Very reminiscent, although not quite to the same extremes, of Omega-Moxley or Jericho and Cody (NOT THE DIPPIN’ DOTS!).

Certainly not an all time great Dynamite, but there was plenty of positives to take away. Perhaps that’s the law of averages kicking in given how much was on this show.

Very much looking forward to hearing your thoughts, and thanks as always for the reviews!

Tonight definitely felt like the Bandido show because that match was phenomenal. The crowd really seemed to buy into the idea that he could win a couple of times.

I saw a lot of hate for the women’s segment and while I agree it came apart, I was also really happy to see someone acknowledge that the division does need changes. Very refreshing after three years of being told “shut up everything is fine”.

I was double screening Dynamite alongside a pretty historic Jays/Yankees game, but between the great main event and a pretty fun Deeb/Storm match there was enough here to make up for a weak crowd (plus some timing/tech issues) and hold my attention. Between the Garcia segment, the Yuta/MJF feud, and Jericho’s plans to “desecrate” the legacy of RoH, a huge portion of this show was focused on the “pro wrestlers vs sports entertainers” dynamic. I’m enjoying that well enough for now, but I wouldn’t want it to overstay its welcome and start overriding more organic and individual stories and feuds.

Any thoughts as to the apparent confirmation that MJF’s chip can be cashed in at will, like the MitB briefcase? It’s not a huge deal to me, but AEW has generally avoided cheap or dirty title wins up until now, and as much as MJF is already an all time heel, I do think his first title reign needs to be cemented by credible in-ring performances as well as devious conniving.

Hi guys. This episode of Dynamite was just kinda there, you know? No big surprises, some feuds continued, but it didn’t feel like must-watch TV like most Dynamites.

Do either of you know who declares days like National Scissoring Day? It makes me wonder why there isn’t a National POST Wrestling Day, or National WH Park Day, neither of those make any less sense.

Jays lost tonight as Aaron Judge hit home run #61, but the Rays lost too, so Toronto maintains their lead in the top wild-card spot. The Mariners look to gain ground on both, they’re ahead 3-1 versus Texas in the 7th inning.

The loose segments were a little stifling and weird tonight. Like people forgot to hit their notes at the rights times… I.E. Saraya mentioned the Lumberjack match was for the title. Daniel Garcia’s underwhelming entertainment list.

Some good matches but not a lot made a lot of sense. Why Juice Robinson? Because he competed with Mox in NJPW? So, a free agent gets a shot to earn a title match before anyone else on their roster?

Weird tone to the show.

We must have been watching 2 separate Dynamites from alternate universes or something, because if you watched the same one as I did, it was not even close to dead. I’d be curious to know what you think of a WWE crowd if you found this crowd dead.