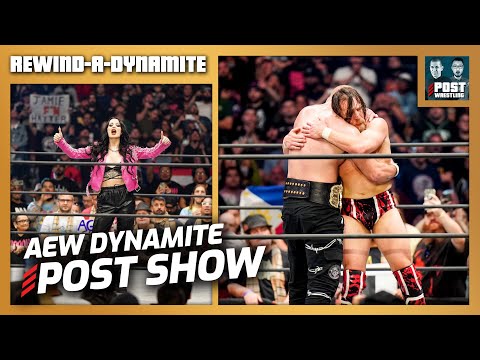 ROH title, sure why not. Jericho is still the biggest name in AEW. And, it’s likely leading into Claudio or someone else winning at the next ROH PPV, and you get Jericho on the card to maybe pop the buys.

Good job Acclaimed and Swerve in Our Glory.

Saraya debuting is cool. Hope she can get used to 9-930 and no storylines. Poor Jaymie Hayter, All Out means nothing.

Does Darby Allin think he’s heading to Arthur Ashe’s funeral? Someone might want to tell him.

Mox vs. Danielson was good. What a terrible way to end with Danielson grabbing the belt. I guess they wanted to save to rest of it for YouTube. I’d love to see Danielson vs. MJF too, I would love to see how those two could work.

Boo to the shitty signs in the crowd.

Overall though a good show with good wrestling. Nice to see Saraya and mox vs danielson was tremendous.

Who was that Darby was carrying around? Does Sting sleep in a body bag these days?

Great show overall but I think i speak for all of us when i say they needed more camera cuts to MJF during the main event. We should have seen his face at all times am i right?

Killer show, can I give it a 25/10? Cause that’s how much I loved it. PPV quality on free tv, can’t complain about that! Fantastic.

Hot hot show. I wished the first three matches didn’t end with cheating, and I thought the tag title match was a far cry from the All Out match, but still had that tremendous atmosphere. As did every other match this week. Fantastic main event. I was thinking Danielson could win to freshen up the World Title scene, but Moxley has proven very reliable this year, between his run in the summer and recently giving up vacation time, and they’ve been building to him and MJF since the tournament started. Big debut for Saraya, but I have questions about her health going in.

Chris Jericho becomes the 37th ROH World Champion (in a row). Great match with Claudio. Daniel Garcia doing the 2005 Batista story. Could Jericho as the champ mean ROH getting its own TV show is imminent, or is it just a method to try for one?

Several POST Marks are in attendance at Arthur Ashe stadium, and what a show they’re still witnessing tonight.

Regarding Darby Allin and a bodybag on the New York City subway, I was there a month ago and in all seriousness, I was struck by how frequently riders are told to report any suspicious people or items. It’s literally every 5 minutes on the PA, and signs are everywhere, too.

PS - The Jays put playoff tickets on sale today despite not clinching a spot yet, and wouldn’t you know it - they lost tonight. Why do Toronto sports teams always get ahead of themselves like this? I guess I should shut up until the Senators actually win something.

No, the Jays still have a good shot at hosting some first-round playoff games

AEW is 3/3 in terms of delivering great Dynamite’s in the aftermath of All Out.

Not only did we see another great Jericho match, but him winning the ROH title is a nice twist. Especially with Garcia holding the Pure championship. And if ROH does get it’s own show? Jericho recreating his AEW title run is a good way to get that brand re-established.

The Acclaimed winning and Saraya’s debut were both great moments that the show will be remembered for. Hopefully the follow up is strong in both regards.

And the finish of the main event was definitely surprising. But I’m interested in where they take Bryan next after failing to avenge the loss. And MJF and Moxley sold me on a title feud in these short few weeks alone. I think the story of MJF taking the title away from the locker room leader will be more well received than a potentially short maiden title run for Danielson.

One of the best two hour shows ever. I loved the pace of the show. The MJF srgment was a great palate cleanser to not just one but two back to back title changes.

The look of the stadium felt big and energetic. The guest stars added pageantry. The finish to the mox match was the most mma authentic and realistic finish I’ve ever seen in a pro wrestling title match.

Moxley deserves his flowers for putting off his vacation as he pulled off the threepeat in the main event. Acclaimed/Swerve in Our Glory was on par with their all out match. Claudio/Jericho was a solid opener that opens the door for Garcia to potentially become double champion (if ROH doesn’t get a tv deal before the year’s end…what is the point?)

It was pretty neat seeing Loso (Fabolous), Whoo Kid and Trina, too. It was like the Source Awards.

Saraya looks healthy and I’m getting irritated over the Britt/Jamie story. Slow-burns are great if done right but dragging this out any longer is torture. I am glad Toni retained her interim title.

It’s okay. The Jays still have a good chance of making it into the playoffs and even having home-field advantage in the first round. Go Jays!

Fangraphs currently has the Jays playoff odds at 99.9% - it’s effectively impossible for the O’s to get back in the mix and for the Jays to fall behind Seattle and Tampa. Only question is which of those teams we’ll be playing and whether the first round will happen in Toronto, Tampa, or whether me and 30,000 other Vancouverites will be able to bum-rush Seattle’s first postseason appearance in 21 years.