Leave us your feedback for AEW Winter is Coming and the Vince McMahon doc on Vice TV.

Tune into the doubleheader tonight. 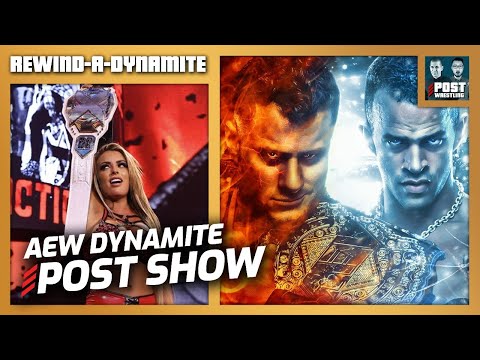 That was the best You Can’t Escape I’ve seen Kenny hit in a long while, and I loved how PAC wasn’t in the shot at all until he ruined the Terminator dive. The match was slower this week, but I liked the story, and I actually think the cartoonish antics and facials of The Elite work great in these matches; we knew Nick wasn’t really hurt, and I thought the hot tags were really accentuated tonight with the fun The Elite were having playing Texas babyfaces. The chemistry between these guys continues to be unmatched, and even though we already know the results of matches 5 and 6, I’m willing to bet they’ll live up to the hype, too.

The “What’s his name” promo really got me because I didn’t see it going that way until he repeated the line. Hangman really is an A1, all-around, homegrown star for AEW.

And I thought last week’s crowd in Austin was great? Garland take a bow.

To that point, I’m not discrediting the conversation surrounding ratings. But if you don’t pay attention to that and only watch Dynamite? Odds are you’d think AEW was white hot. Stellar shows, hot crowds and tonight was another example.

The standout, and there was a lot of really good stuff this week, was once again Chris Jericho. I must sound like a broken record, but I still believe that 2022 has been the best year of his career. The range of opponents, the variety of match types he’s been involved in…and now this. Out of nowhere, they create a modern day Razor Ramon-123 Kid moment. And why not? Jericho isn’t hurt by it in the slightest and Action Andretti is on the map.

The only negative was the Acclaimed being setup for a match with Lethal and Jarrett. But even that is fine to bridge the gap to whoever the Acclaimed’s next big program is with. No clue who that might be though. FTR again?

I loved this episode of Dynamite! Not going to lie I got caught up in the main event that I really thought Ricky was going to take it. Wishful thinking I guess. But this is what made me fall in love with AEW. New stars doing their thing. The crowd was insane and I wished I made the drive to see it this year. I hope they come to Houston soon too.

Dynamite had its Razor/123 Kid moment with Andretti/Jericho, I felt it was inevitable but the booking of the match made a relative unknown become a star from bell to bell. Elite vs Death Triangle going No DQ is a good choice to make each match in the best of 7 series feel distinct.

The main event was solid, Starks has an out with MJF’s low blow and I bet this won’t be the last time they’ll cross paths.

I bet Danielson/Friedman will be in Seattle (non-title, I wanna add)

A great episode! I’m one of the few people like John Sino that watches Dark regularly. I enjoyed watching people like The Acclaimed and Tay Melo hone their skills and figure things out to the point of being featured stars on Dynamite. Seeing Action Andretti get the 123 Kid treatment with Jericho helps justify Dark and Elevation for people who enjoy watching talent rise up and make it. The crowd was totally engaged where the crowd went from sarcastic jobber chants to falling in love with him and the upset. Jericho’s tantrum was a nice touch that past Dynamites may not have shown due to its breakneck pace. The new executive producer seems to be making some changes already.

House of Black as Three Minute Warning is right up my alley. More of that please!

The Elite and Death Triangle series needed some stipulations. I enjoy the matches, but unlike FTR and The Briscoes, I found it hard for me to differentiate each match.

Starks and MJF have the potential to create a generational rivalry. Something about the two of them together just works. MJF was a prodigy who was always projected to be the world champion that he is now. Not many felt that way about Ricky Starks. He’s worked hard for the audience to notice him, and now he’s undeniable. I hope we eventually run the match back, but it seems like Danielson has his turn at MJF coming up in Seattle.

I thought this was a very fun episode. I enjoyed the main event. The Best of 7 going the distance is a given, so I’m all for the stipulations being added. Loved the House of Black “in action.” A memorable upset loss for Jericho, and I hope Action Andretti gets some good follow-up in the coming weeks. Outstanding promos from MJF, Starks, and Hangman. I’m guessing they will try to build to MJF vs. Danielson for Revolution, but it’ll take a lot more creativity that I think these two can rise to.

As for the Vince McMahon documentary (save it for the Cafe show next if you like), it felt to me like an extended promo for Dark Side of the Ring while trying to capitalize on the news about him this year. I was quite disappointed by it.