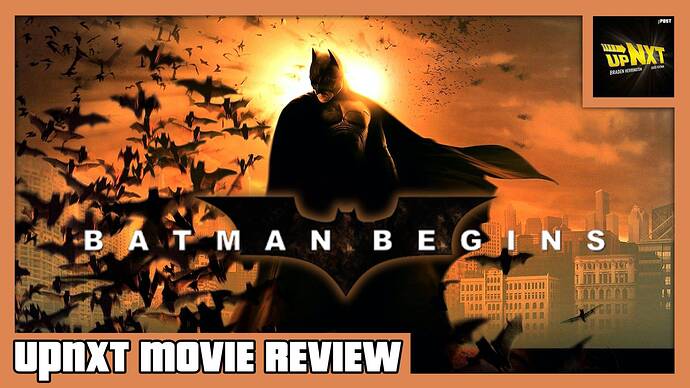 Allo, allo, allo! Davie Portman here requesting all of your feedback for this week’s FREE Movie Review as Braden and I go back to Gotham to look at Part 1 of Christopher Nolan’s Dark Knight Trilogy - “Batman Begins” (2005)

After witnessing his parents’ death, Bruce learns the art of fighting to confront injustice. When he returns to Gotham as Batman, he must stop a secret society that intends to destroy the city.

Braden and I will be recording on Tuesday.

As someone who grew up watching/reading a lot of Batman, but mainly for the Bat Fam (Robin/Nightwing is my fav fictional character) I didn’t expect to enjoy a origin story all that much, since Bruce as a character I generally don’t enjoy. But, this is a fantastic film. Not only do I find it is the best film of the NolanVerse, but it is clearly to me the best Bat film of all time.

The origin is done to perfection and could have easily been seen as a straight lift from Year One. The villain choices I was thrilled with, I even loved the swerve of the decoy Ras Al Ghul looking just like the comic counter part, to really convince someone like me that it was the real deal. This is peak Batman storytelling to me, and if we were going off this film alone I’d say he is the best portrayal of Batman, but alas they kept going. Great film non the less, hope you guys enjoyed it!

In my opinion, Batman Begins is the best Batman movie, and a top five film in the superhero genre. Batman Begins showcased a level of storytelling and character development that was previously unheard of in the genre, especially when compared to other origin stories, as well as the prior Batman films. All of the leads give great performances, and each central character was so layered compared to their prior incarnations. Just think about Commissar Gordon’s role in the originals. I did have some issues with the “I’m not going to kill you, but I don’t have to save you either” cop out ending, but that’s a wider issue throughout the dark knight trilogy, that I’ll complain about more down the road.

I could go on and on about how great this movie is, but I’ll cut myself off. Batman Begins is the height of the dark knight trilogy, and in my mind, the best DC comics film thus far.

1st off congratulations on the successful move to the new BDE! I forgot to post feedback for Batman & Robin. To keep it brief that movie was as bad as the terrifying jump scare I got from Man-Bat in the Arkham Knight game.

I wasn’t looking forward to Batman Begins during its theater release. My fandom was pretty much gone. Anyway I did watch it on DVD when it came out. This movie seems to get better every time I watch it. Fantastic origin story telling. The side characters helping Bruce/Batman were great. I forgot how good the Batmobile chase scene was. Scarecrow came off very well for a character I only seen in animation form.
This film makes a strong case for best Batman film!