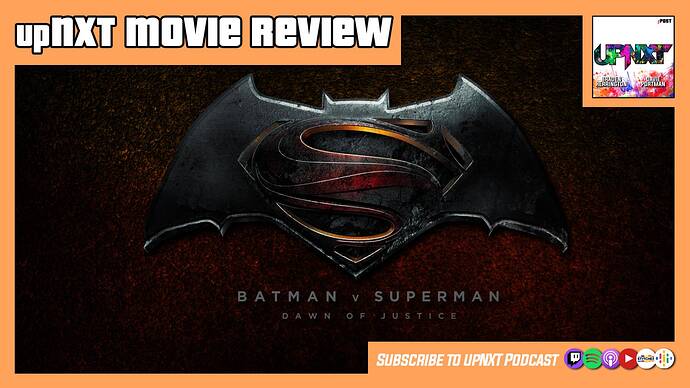 Allo, allo, allo! Davie Portman here requesting all your feedback for this month’s Batman Review! This time we are moving from the Nolanverse to go to the Snyderverse with his first take on the caped crusader in “Batman v Superman: Dawn of Justice” (2016).

Bruce Wayne, a billionaire, believes that Superman is a threat to humanity after his battle in Metropolis. Thus, he decides to adopt his mantle of Batman and defeat him once and for all.

Braden and I will be recording tomorrow. Show will be available for upNXT Patrons this week and will be released for free later in the month.

Well I would definitely consider this much more of a Superman movie then a Batman (as being a direct sequel to Man of Steel, all the villains and side characters being Superman characters, outside of Batman and Alfred of course). But, as long as we’re talking about the Ultimate Cut, as it’s the one that is Snyder’s actual vision, I love it. I’m a huge Superman guy snd Cavills version is the best on screen Superman bare none to me. I really enjoy Jessie Esignburg version of Lex, taking elements of the old style mad scientist version, the modern business man, even bits of the 90s Luther Jr in there. Aflecks Batman is also superb, and feels like a comic book Batman to me more then anyone else. So overall I love this movie, is it as good as Man of Steel, or Snyder’s Justice League? No, but it’s still an upper tier superhero film, but I’m also a Snyderverse guy. 9/10

On a side note I’m working on a Robin cosplay based on the suit you see in the case in the Bat Cave!

I did not hate the movie but if you compare it to a marvel counterpart, it would be civil war with Iron Man vs Captain America. In the latter, there is psychology, deep story telling, they have clear reasons to fight each other. In Batman v Superman, the DCU skips a lot of that and they ask themselves, “how fast can we have them fight each other in the movie” ? Again the DCU does not take time to develop its characters. It’s like people who want to start writing books but just the action not the descriptions.