POST your feedback here for the NXT show airing on Wednesday April 4/2018 for upNXT with Braden and Bartender Dave for Thursday April 5/2018. We’ll be recording late Wednesday while Dave’s kids sleep.

Bartenders! So I’ll be going to the Saturday 1pm session at Axxess. As long as the lines are anticipated to be, I may only realistically be able to meet two (maybe three) people. Of the ones listed below (Mandy Rose also announced on her IG that she’ll be at this session), which of these do you guys think I should try to meet, and why? 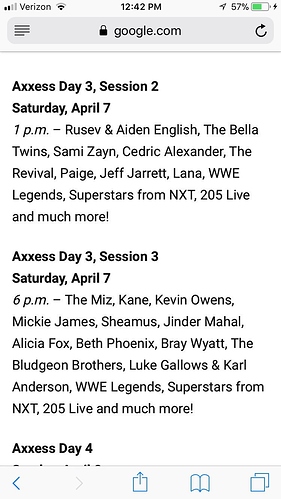 Lars Sullivan is trash. I don’t why y’all like that numpty. Braden, DO NOT model your facial hair after that lousy Snitsky rip-off. Never, ever shave the moustache part of a beard, unless you want to look like a sexually deviant neanderthal.

I’m not a big fan of Killian Dain, either. When you have remarkably talented big guys like AOP and War Machine, and Braun Strowman and Luke Harper on the main roster, what’s the point of having less talented big men like Sullivan and Dain? (Or Erik Rowan, Baron Corbin, or the 50-year old potential mayor of Knoxville County?). It just makes your talented big guys’ size seem less impressive.

Less Lars Sullivan, more Kairi Sane. Then the world will be a better place.

( I don’t know how much time I told you guys thanks for being back but seriously thank you, first feedback on upnxt )

Omg what the hell… strong and Dunne are lit like lit af ,I’m really Mad that the match ended by double dq. I can’t remember Who thought that aop weren’t that good but I really like them and they are more then ready for raw or sd.

Last week I was complaining on the builds for this take over because it wasn’t that good , but The person who made the packages for the North American championship , Gargano Ciampa , black Almas needs to go up the main roster .

Wooooow the main event was the spring board flip from ricochet holy crap thee highlight of the show !

Question : I don’t know if you remember but I watch only wwe product , on what’s nxt i told you bray that Adam Cole was nothing but a guy who scream his last name twice and you approved, I dint see nothing to build ricochet character plz tell me why should I care for him ( except I saw the best sling board back flip I ever seen ) !?

Ps , did you guys watch Murphy khalisto
Sorry for my English

NXT is pretty hit or miss with go home shows, and this one to me felt like a hit. The tag match was great, the closing segment was really cool, and the packages - especially DIY’s - got me hyped. I especially love the end of that package with Gargano and Ciampa looking at the sea of Johnny Wrestling signs. But, I do think the women’s match was pointless for a go home show. I also find it interesting that the NXT title match is a redemption for both guys. They had a match at last year’s Mania Takeover that got no love from the crowd. Look how far they’ve come.

This card and weekend are shaping up to be something special, so hopefully it delivers.

Question: Do you think that ROH should start running their Mania weekend shows on Friday? It might just be me, but this year and last year I’ve felt more attention was on the Takeover show, even though both ROH shows have had big main events.

Alex K from TO

I thought today’ show would just be highlights and previews for Takeover but was happy with the matches presented especially the woman’s match plus Lacey Evans calling out every female babyface on the roster.

John Pollack yesterday said he didnt want any new faces in the crowd because the NXT roster is already full but what do you two think? Also what about some returns such as Iconic or Drew McIntyre?

So awesome to have you guys back on UpNXT. I thought this was a good go home show with solid video packages and a solid tag match. My question to you guys is who do you see being called up Post Takeover. I could see Iconic, Cien, and AOP as definite call-ups.

Keep up the great work and shout out to Bartender Dave’s for positive messages every podcast.

PS did you see EC3 calling you guys out about his shoe game. I do agree with him about brown loafers with blue though, they do go well.

Unlike Raw/SD, NXT know how to hype a card. They blew it out the park with the ladder match promo and DIY promo.

Was enjoying the tag match and look forward to the 3 way (poor Cole). I wish Sane was in a better spot and Bourne is looking better every time. Loved the end to the main event. Makes the new title and Ricochet seem like a big deal.

Question…Do you see the need for an additional 30mins added to NXT? The new title and massive amount of new talent makes me think they could do it easily. Any predictions for TakeOver? I want Almas to win just to see more of this fantastic feud and make Blacks title win even bigger.