Leave us your feedback and questions coming out of New Year Dash.

Wai Ting and I will have a POST Show up for free on Saturday afternoon.

Listen to our Wrestle Kingdom POST Show on Patreon: 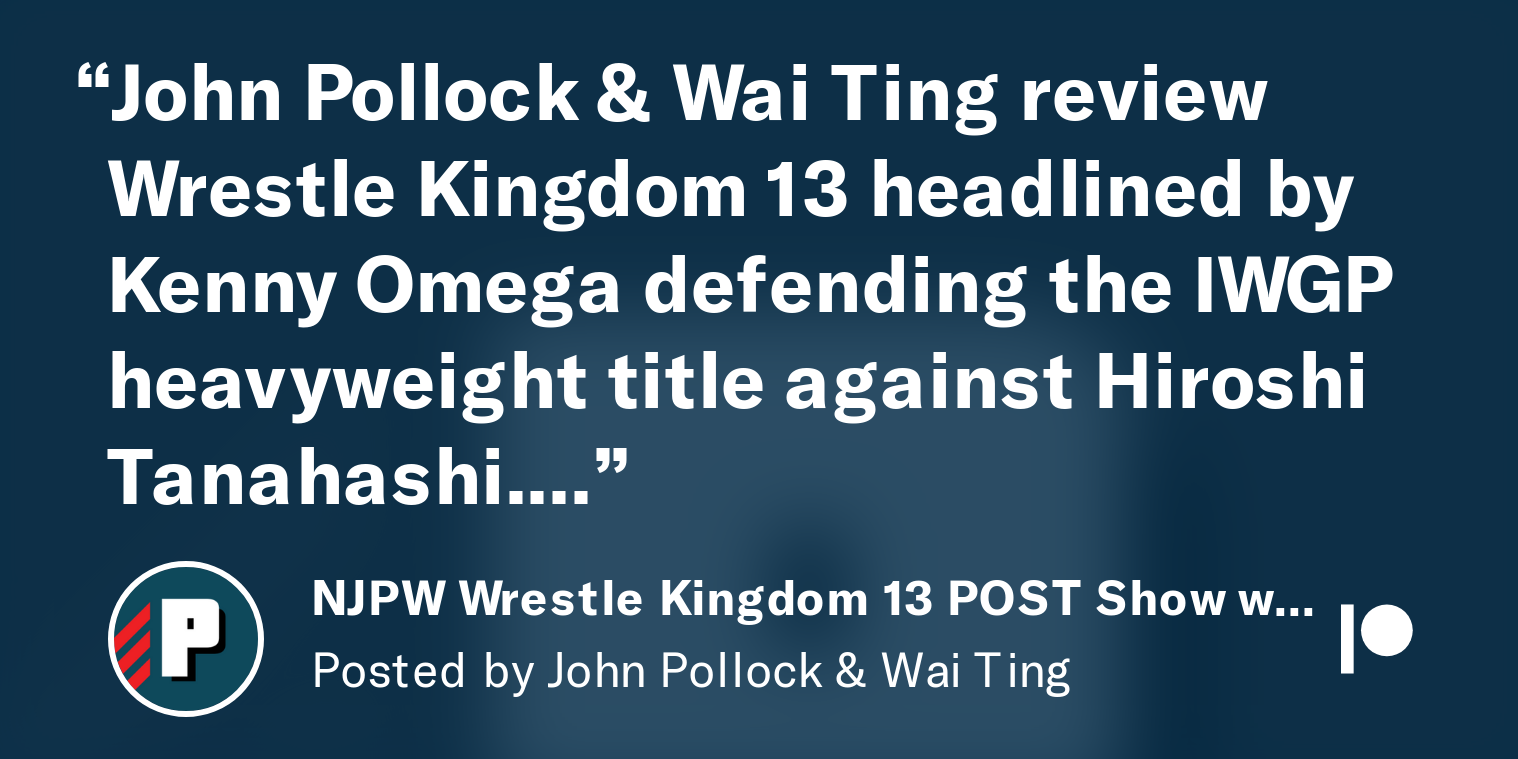 A good New Year Dash!! event when in comparison to more recent years, their was no socking returns or debuts as a western fan, sorry Yoshi-Hashi.

So Chase & Yujiro are re-joining Bullet Club but ruin the surprise by wearing the Bullet Club gear during their opening tag match before the NEVER 6-Man run-in. However Angry Suzuki-gun is best Suzuki-gun!

Lastly, during Will Ospreay’s post match interview after Wrestle Kingdom he stated
"… I want to compete againt the best heavyweights in the world, and I don’t just mean in New Japan. I mean around the world, Ring Of Honor (

), anyone. …"
As someone who’s seen the amount of time Will Ospreay has spent on the Aussie & Kiwi scenes over the past two years helping the young talent make me not only happy for him, but excited for what possible matches we could see, maybe “Robbie Eagles Vs Will Ospreay III”, hey a man can dream.

First I’d like to apologize about the typo from yesterday. I meant to say that even 20 minutes after the show my HEART was still RACING.

Now on to the topic at hand, this was a completely fine show. Nothing bad in terms of wrestling, but nothing shocking in any way, which is something we came to expect from the Dash shows.
I’m happy for Chase and Yujiro that they returned home to the BC side, I never felt they really belonged with the elite crew.
Taichi going after Naito and Zack and Suzuki going after the tag belts is refreshing, I’m looking forward to both matches.
I don’t understand why they decided to put White and Tanahashi together so early. Who do beat in this situation? But in Gedo I trust as he has yet to underdeliver.

P.S. YOSHI-HASHI getting pinned in the match to celebrate his return is the most YOSHI-HASHI thing ever.

Underwhelmed. Lack of Elite seems like a giant elephant in the room, considering Omega was just the champion. A final ousting of them by the BC would’ve just gotten more heat on White, and could’ve still given us the Owens and Yujiro turns. I don’t like the direction of either of the main titles, or having Tanahashi look like an idiot. But Gedo has earned my benefit of the doubt, so let’s see where this goes.

Considering this was probably the final edition of New Year Dash, before the two day Wrestle Kingdom next year, I thought it was a solid card, which opted to continue existing storylines, as opposed to creating new ones.

Not surprised at all to see Jay White as the number one contender and I actually see him winning the belt, since it would be the logical continuation with his feud with Okada, which could culminate at Dominion.

The lack of Elite pretense definitely stood out. While the Young Bucks, Hangman and Cody are definitely gone, the future of Kenny Omega is still up in the air and it is unknown where his future allegiances lie. I guess I have to watch the next Being the Elite for answers…

Hugely underwhelming show considering the angles we have got in the past 3 years.

Solid matches, with my standout match being the 6 man with Ospreay, Ishii and Goto vs Cobb, Nagata and Kushida.

Just finished New Year DASH!!! (Went to visit my parents after WK so was delayed in finishing DASH - took a few sittings) FWIW here is my feedback

Taichi sucked all 2018 and still sucks. Disappointing first feud after Jericho for Naito.
But
I wanna see ZSJ and Suzuki vs Sanada and Evil and Sanada for the tag gold. That’s fresh and would be awesome. Can do some good singles matches on the New Beginnings Tour before the match.

Chase Owens is fat, out of shape and has zero character. Yujiro is a nothing in New Japan and has only ever been entertaining via BTE - there’s no need for an over bloated Bullet Club and I guess they are being brought in for multi man tags with White (?) this was a real nothing in terms of surprising storylines coming outa DASH

And finally I missed Yoshi Hashi in New Japan as much as I’ve missed Bray Wyatt in WWE - that’s to say, I actually didn’t remember they were gone. He was a zero in 2018. And felt like a zero in his return.

Weakest DASH in a few years to be honest and a let down after WK13. Maybe because there was no closure on The Elite leaving and no Kenny answers. That was always going to be the most intriguing story coming outa WK for me as a North American fan but alas we couldn’t actually get answers yet and I knew that would be the case so I suppose not bummed about it but it just meant other major story’s had to happen to make me focus on anything else and I didn’t think DASH provided that.

Who is excited for Yoshi Hashi and Naito v Phantom of the Opera?

In the plus category: Any mix of Osprey Cobb Goto Nagata Ishii Kushida for Never Open is great. I didn’t expect to be that intrigued by those guys and those 6 as a division makes it the most Interesting title scene coming out of the weekend (for me)