Leave us your feedback for Wrestle Kingdom 17.

Wai Ting & John Pollock will be live at 1 p.m. ET for all members of the POST Wrestling Café.

First time watching a NJPW event and had a blast.

Loved every match from top to bottom. The top 2 for me were, Omega vs Ospreay and Ren Narita vs Zack Sabre Jr.

The only blunder of the show was Mercedes’s promo for me.

Thank you to the post wrestling community for making it super fun!

Glad to say that New Japan feels like New Japan again. A rocky start, with Kairi and Tam in particular getting very short-changed, but I enjoyed pretty much everything from FTR onwards. Obviously Ospreay and Omega stole the show - that top rope German made me scream - and I’m hoping they can run that back in the UK one day. Okada and Jay might not be to everyone’s taste, but I’ve enjoyed all their matches and loved this one too. Probably helps that we started the show at 7am here, rather than finished it around then.

Also, I think this show struck a great balance between big names and rising stars. Shota getting the pin in the Mutoh match was a nice surprise. And while Narita and Wato both lost, they looked great in defeat and I’m excited for their redemption arcs to pay off in 2032.

All in all, I’ve had a lovely morning. Hope you guys get some sleep before Dynamite.

I have been very critical of New Japan Pro Wrestling and its product offering over the last few years. One of my bigger gripes was the upsell on US-based PPVs when WWE conditioned fans in North America to pay for a service and get all the shows. While I do think they need to resolve this if they want to capitalize on their new investment in the North American market - I would be remiss not to praise New Japan for the value that Wrestle Kingdom was (roughly $7.50 USD - kind of crazy this show cost so little to watch). I anticipate paying more to keep up with New Japan, but if they are going to provide this quality of a show I will do so happily. WK featured major North American TV stars back in the mix (Omega, FTR and the debuting Mercedes), high caliber wrestling, and a fantastic commentary team. The interest online was palpable and people were awake on my timeline. It felt like New Japan was finally back on the scene. Hopefully the low barrier to entry will help bring eyes to New Japan.

No amount of praise will ever be enough for what Chris Charlton brings to the product. As a semi-lapsed fan, I can sit down for any match he is calling and feel entirely invested in the story and context he paints. It’s like verbal art. Kevin & Chris are a special combination. Gino adds a lot to and hearing them again together was great.

I’ll leave feedback on this match since I doubt anyone else will - as somebody who got into NJPW during Bullet Club, I actually was looking forward to the Tama - Karl Anderson match and I thought Tama showed a lot of promise in this year’s G1 which I did watch. I thought he finally found a groove and this could be a culminating moment for him, especially with how Karl has been received. That - in my opinion Karl sandbagged the finish like that was pretty unprofessional. Contrast that with professionalism which should be noted - and that is FTR going territory to territory - winning AND dropping their titles CLEAN. Which I also thought was worth highlighting as their Belt Collector run comes to a conclusion (and in my opinion was the best version of this gimmick in a long time due to how clean everything was).

John and Wai first off happy new years to you both and the post community.

Not so much feedback on the show as i havent watched in full yet, however question for you both.

Looking back in time, did you guys ever think 15 years ago or so when watching a young Okada (UWA) in Mississauga preform that he would go to be the face of Japense wrestling that he is today.

Watched the show in chunks, some live and some delayed balancing it with my work day.

Personal highlights were the Narita/Sabre Jr and the Omega/Ospreay matches, the latter just a relentious pace compared to the somewhat sedate match that followed it. With the Suzuki-gun breakup I hoped it would lead to Sabre-gun so wonder if the TMDK teamup is the first steps toward his own faction. The Moné debut was done well, a shame it probably came at the cost of a longer title match, I wonder how much of her time will be spent wrestling in Japan or whether her time will be split with other US based promotions.

May need to revisit some of the show, FTR tag mainly, but as a disjointed New Japan fan over the pandemic, tuning in only for WK & G1 finals for the last 2 years, they have piqued my interest on how they will follow up with New years dash tomorrow and future shows.

That Ospreay and Omega match was unbelievable! I hope we get a rematch at Forbidden Door this year.

At the time of this post, Sasha Banks is still listed as a current performer on wwe.com’s superstar page and not an alumni. WWE is usually pretty quick to make these types of changes. Do you think this means anything?

I was watching this on the beach in Mexico for a vacation where they later had Lucha Libre night! 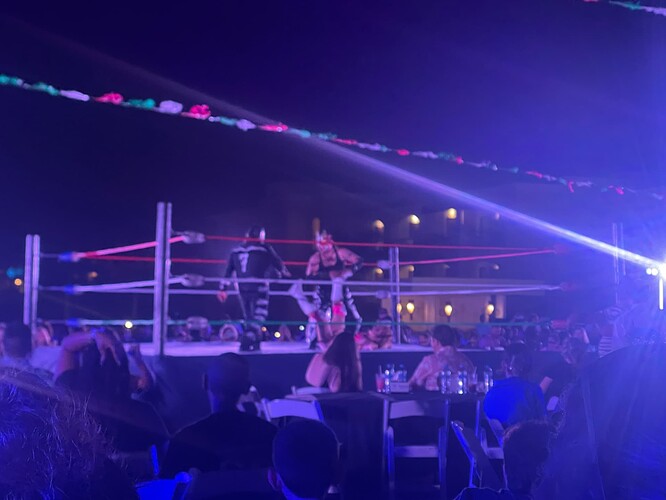 This was a good show for lapsed NJPW fans finding their way back, possibly due to Omega, FTR, Mercedes or Karl Anderson. Crowds cheering again feels right. The matches were all excellent at the least and all timer at the most. Will Ospreay has come a long way as an overall performer in the last four years and had the match of his life with Kenny Omega. Mercedes Moné feels like a TNA Impact Zone name, but it’ll be fun to see what she can do outside of the WWE system. She looked very refreshed and at peace.

The Young Lion system continues to succeed, with Shota Umino and Master Wato having standout performances and moments.

Question: Do you see Oleg Boltin being placed on a similar path that Kitamura was on, where he was able to stand out above his Young Lion class due to his look?

Happy New Year to you all!