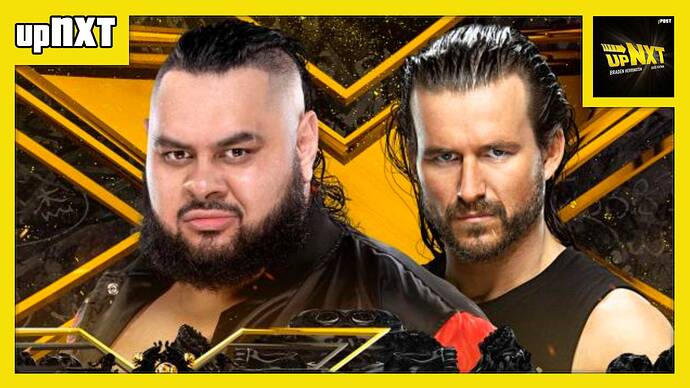 Braden and I will be recording upNXT LIVE on Twitch at 10:15ET.

Work sucks, here I am, NXT on in the background: thoughts on whatever I catch:

A few weeks ago I did not seem to like Hit Row’s live performance as much as others; tonight, I very much enjoyed their backstage taped segment. The group has infinite upside, never thought otherwise, but the taped backstage segment comes across better right now than the live longer stuff.

The Joe segment with Regal was great. Joe really delivered well on the mic. What if the Kross is Raw stuff is really just a way to try and expose him to more fans to then hype him vs. Joe who already got more eyes on him on the main roster. Yeah, Kross’ booking blows but if he’s more over to mainstream fans and Joe can carry him, that match can be very hot come Takeover.

Nothing annoys me more than a bad Golf segment. This one hit every dad joke. BTW, was that 3 straight segments with no in-ring.

That Dakota Kai turn was awesome. I mean who didn’t see it coming a mile away but really really well performed. I compare this to the LA Knight one we saw a few weeks back that went on longer for less impact. I could get behind her as rejuvenating the NXT Women’s Division

I have not been the most positive on NXT lately, but I have to say tonight was a thoroughly enjoyable episode. A LOT of non-wrestling, but I actually thought much of it landed.

A lot of great things happened in this show, but nobody had a better night than Penny Oleksiak. Bronze medal, 6 in her career. Canada’s most decorated Summer Olympian!!