Thanks for all the questions so far. Last call for anymore - as we are recording tonight.

I don’t think I have any questions per say, but I thought I’d stick a wee post up to say good luck on your “first” episode. Here’s to many more years listening to the premier British Wrestling Podcast… no offence to the rest out there of course!

PS: Looking forward to the Wrestling Round Table you’ll be joining with John and Brian, Martin!

Thoughts on Rev Pro and any thoughts on what Defiant could do to differentiate themselves and be seen as a player in the British wrestling landscape?

I’ve just recently noted that as a NJPW World subscriber I’m able to watch RevPro matches that involve NJPW wrestlers such as Suzuki vs. Riddle or Lee vs. Ishii (same goes for ROH).

Do you know if this has effected the RevPro on Demand service in any fashion? It doesn’t/wouldn’t give me, as a NJPW viewer, any incentive to subscribe to the RevPro service (I know that they have tons of other talented wrestlers) since I get my portion of NJPW wrestlers basically for free. Is this a sign that RevPro doesn’t really care all too much about their subscription service and mainly focus on ticket sales? Imagine WWE being able to put the Jericho vs. Omega match from WK12 (since Jericho is “their” guy) on the WWE Network. I doubt that there would have been such an increase of subscriptions before/after WK12.

I think they put certain matches on NJPW World a few weeks after they put them on their own services. I think the idea is that this might lead people to subscribe to the Rev Pro service based on the matches they have seen world.

Well, at least in my case, it isn’t working (again, I don’t know if the numbers back me up).
I once subscribed for RevPro, when Meltzer started talking about an amazing match on one of their shows (don’t know who the participants were anymore), but once I’ve noticed I could see the match on NJPW World, I cancelled. And the fact that those matches are uploaded regulary on NJPW World doesn’t give me any incentive to subscribe to RevPro.

Do they upload every Rev Pro match that features New Japan talent? And every RoH match that does too? I was under the impression that it was only certain matches they did that for.

Didn’t check every upload, but the Global Wars UK 2017 - Day 2 event featured at least one NJPW wrestler in every match and therefore every match was uploaded.
1 (click) 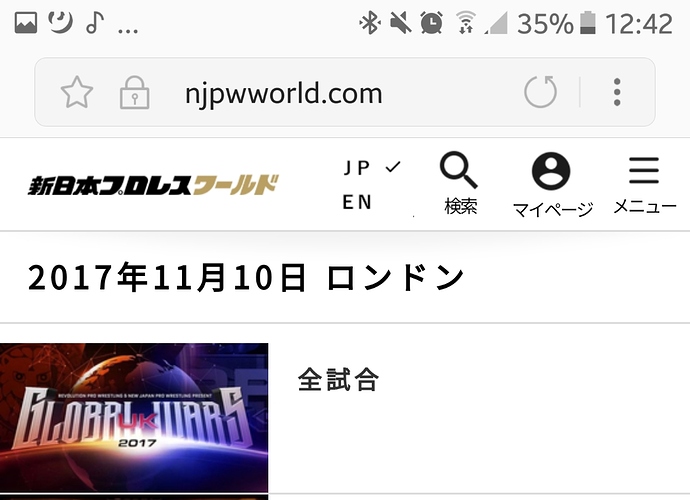 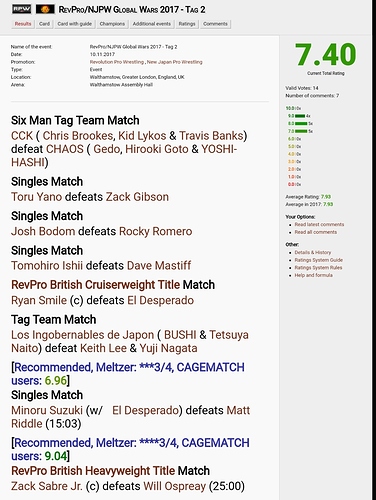 It must be a deal they have with rev pro. It certainly can’t harm them in the long run. Getting tons of exposure with their product being on NJPW World.

Great show guys!!! Thanks for reading my question.

No worries rob. Thanks for listening.

Our second show will be dropping this Thursday. If any one has any questions then please fire away.

If impact had moved to UK like it sort of has moved to Canada now, back in 2012, where would you see the UK scene today? Would there still be a Progress or Rev Pro? Something else?

Going back through the years, what BritWres card can you look back on and think “Bloody hell! I can’t believe I saw that!”.

For me, It was a 2012 Fight Club: Pro show. I paid a fiver to see Johnny Gargano, Jonathon Gresham, Prince Devitt and Davey Richards, as well as BritWres mainstays Clint Margera and Trent Seven. A fucking fiver. Absolutely incredible. Held in a small, grimey nightclub too with about 80 odd other punters in attendance. It’s unfathomable, and one of my favorite things about attending live shows is the ability to look back in hindsight after and really take in what happened on the night.

That sounds like a hell of a line up.
I wasn’t there but Zack Sabre Jr faces off against Daniel Bryan in a pub function room in front of about 80 people.
Quite surreal thinking about that now. 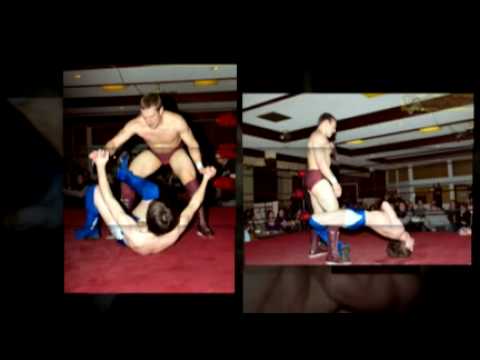 Hey folks - Me and Benno will be recording the latest show tomorrow night. We will be talking Rev Pro ‘Summer Sizzler’ 2018, the life and career of Doc Dean, ITV WOS Episode 3 & 4 and looking ahead to Progress’s big show at Wembley.
So if anyone has any feedback on the above or any questions at all about Brit wrestling then fire away.

Hey guys,
My main question is what are your thought on Kid Lykos? The guy has had a really unlucky year and his return was short lived but CCK already got a lot in that short time (winning Progress & Fight Club tag titles). I not only feel bad for Lykos but for Brooks, who has now randomly picked Timothy Thatcher as his partner for the Wembley show. Do you think Lykos is now labelled injury prone?
My other question is about ICW, have you guys been watching any of it? I was a pretty die hard fan of it about a year ago but I’ve fallen off a lot. What are your thoughts of it and what do you think they’ll do for their big Fear & Loathing show later this year? At this stage anything could go on that card.

On the show this week - we will be talking OTT Wrestlerama 2 (Walter Vs Devlin), Defiant Stacked (Ospreay Vs Walter), Progress’s road to Wembley, the Rev Pro TV deal, World Of Sport & PCW on Fight.

Money’s kind of tight, so what would be the one UK Indy you guys would recommend someone getting their streaming service?

2 random questions guys. Who do you think is going to be the next break out UK guy? And who on the scene are you surprised hasn’t taken off more?