Link for all patrons.

Drew attacking an injured person after a car crash, not very face-ish.

I am loving the bloodline segments especially anything with Sami and Jey together.

Hunter has a sincere side, who knew?

Pretty neat having the bray logo pop up during the hit row entrance and even adding the bray laugh to the entrance theme after having Cole acknowledge it saying Bray is starting to have fun.

I’m curious about the direction Liv is going and a fun fatal 4 way to follow that. The head scissors driver by Rey on Ricochet was impressive. My guess is Dom costs Rey the title?

Amazing emotional promo by Bray and talk about an interesting / creepy way to end it and go off the air.

Fun fact: This was the first time Rey and Sheamus shared the ring as opponents. They have only been tag team partners in the past.

I was in section 111, Row E, with my little mug facing the Hard Cam, thanks to @Alex_Patel, who very graciously gave me his tickets. Maybe y’all can help me figure out a good way to pay him a Kindness in return. We also got a new member of our wrassles cult out of it… It was my friend Nic’s first show and he loved it.

YYYYYOOOOOOOO!! They did Dalton Castle SO dirty, cutting his promo down and skipping when the boys formed a little Human/Peacock chaise lounge and SO much of the charm and candour Castle poured into that promo. They completely cut out the context for how he got fired up.

Wai is right about storytelling being a weakness in their presentation. I get why Tony Khan wants the pace he does for his shows, but I am legit confused about what the purpose of it will be if it’s compromising the quality of the shows. It feels like, over the long term, it’s not a practical or sustainable model.

I am wondering if this might be some of the reasons why Cody Rhodes no longer felt that AEW was a good fit.

Anyway, here are some pics!

And if you’re interested, a clip of my lovely voice from today, still all battered from the screaming, chanting and cheering at the show. — https://music.youtube.com/watch?v=WnC6f6LkLQ4&list=MLPT 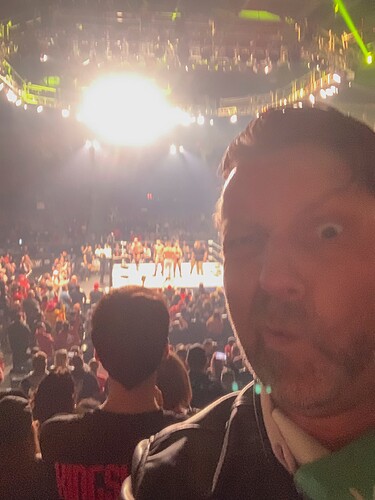 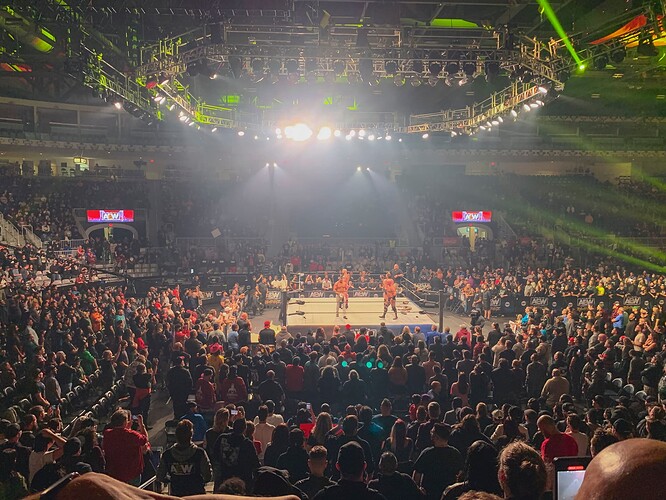 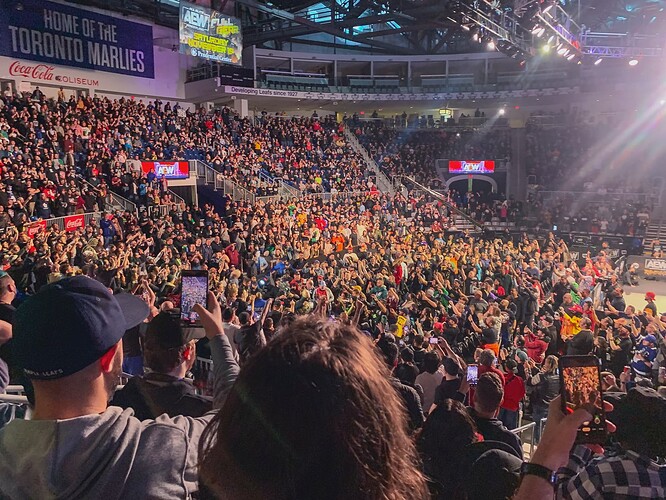 Loved the Bray segment. I’m absolutely fascinated to see where we are going with this. And I know why they did it, but I just wish they put him out there at the Barclays Center last Monday. Would have blown the roof off the place.

Never in my life have I ever known ‘Up Next’ to mean 1 hour and 45 mins later. WWE needs to stop this.

Smackdown was great, up until the Bray Wyatt segment. I’m not looking for a supernatural Bray, but this was not what I wanted to see from him and then what was that ending? What are we supposed to read into that? Why did his own shit interupt him and then just end the show? I thought someone else qas going to be revealed to be behind it and end up attacking him, but the show just ended. It was very strange.

Bray Wyatt’s first promo back was gut-wrenchingly heartfelt…up until the abrupt ending. I don’t know where he’s going with it but I’m willing to give it a chance without the old regime handcuffing him. Solid wrestling all night long with the four-way being the match of the night and it was neat seeing Roxanne Perez make a guest appearance as the synergy with NXT is a good thing.

Rey vs GUNTHER should be fantastic.

As for Rampage, seeing the Kingdom appear made sense because of their ties to ROH but it felt like Tony Khan’s habit of throwing everything but the kitchen sink reared its head. There’s just not enough minutes on TV and ROH’s presence is becoming a little bit of a nuisance

That was the first full episode of WWE TV I’ve watched in a few years and just to see Bray. Right before the pandemic, my brother took me the episode in Boston where he challenged Cena to the Firefly Funhouse match and it was last Wrestlemania match I was excited for. I loved his segment tonight - I was sucked into the whole thing and shocked by the ending. It was worth the 2 hours, and now I feel like I have to watch next week … that’s good wrasslin’

Besides that, the show seemed to move pretty well. Loved all of the back patting on commentary for the “new regime’s” great booking. John - I have been skeptical of this so-called Good Michael Cole, because I have always at best tolerated him, but I thought he was fantastic. Wai, I popped for the Championship Wrestling from Hollywood drop.

I am sorry, on the show I forgot to verbally thank you @Alex_Patel! I’m sorry, I was a little flustered

Here’s that Shawn Spears promo for anyone looking for it. 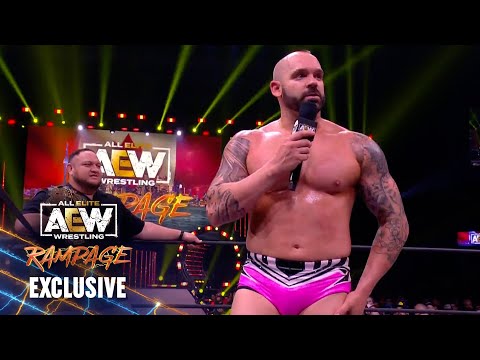