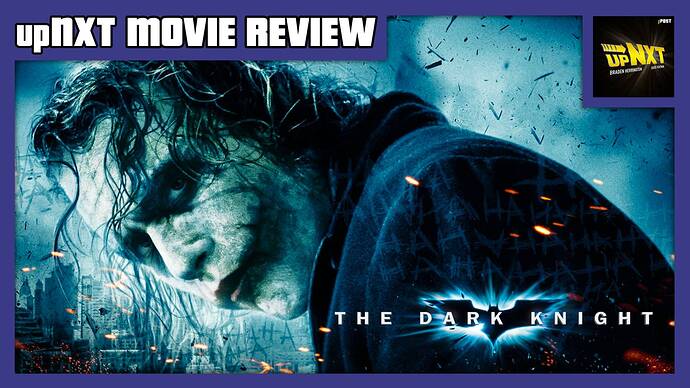 Allo, allo, allo! Davie Portman here requesting all of your feedback for our latest Batman review and we have finally made it to the movie many consider to be the greatest Batman film (and one of the greatest movies full stop) ever made…The Dark Knight!

After Gordon, Dent and Batman begin an assault on Gotham’s organised crime, the mobs hire the Joker, a psychopathic criminal mastermind who offers to kill Batman and bring the city to its knees.

Braden and I will be recording on Wednesday.

Another Bat-Review! Now I’m sure I’m no where near as high on this one as most, it’s the middle ground for this trilogy for me. Although it is very good, I do think the portrayal of the Joker here is over rated. Although he does a decent job, he is still behind Mark Hamill, Cesar Ramaro, and Jack Nicholson as far as Joker performances in my opinion. Now as far as villains, I was WAY more interested and invested in the development of Harvey into Two Face, and when he’s just rushed at the end I was severely disappointed. I thought he was being set up as a villain for the third film, but alas, we got what we got. Still much better then a handful of other Bat Films, but no where near as good as Batman Begins (or Mask of the Phantasm, or Forever, or 89…lol) 7/10