On Rewind-A-Wai #88 this week, it is another movie selection with “The Longest Yard” from 2005.

This selection was made by Espresso Executive Producer @B_Dizzo.

The film stars Adam Sandler with many pro wrestlers/fighters cast in the movie including Steve Austin, Bill Goldberg, Kevin Nash, Bob Sapp, and The Great Khali.

Post your feedback in this thread. The show will be released this week for all members of the POST Wrestling Café.

Disgraced pro football quarterback Paul Crewe (Adam Sandler) lands in jail, where manipulative Warden Hazen (James Cromwell) recruits him to advise the institution’s team. This turns into a lead role quarterbacking a crew of inmates in a game against a team of prison guards. Aided by incarcerated ex-NFL coach Nate Scarborough (Burt Reynolds), Crewe and his team must overcome not only the bloodthirstiness of the opposition, but also the corrupt officials trying to fix the game against them. 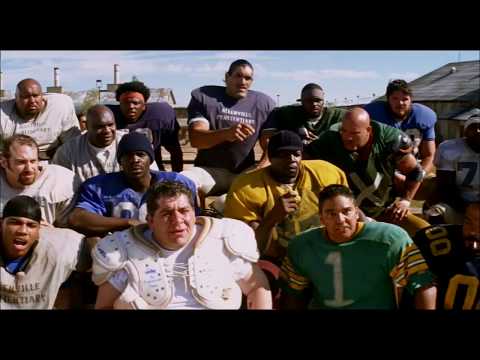 This is a podcast that I never thought would happen, but I’m so glad it is. It’s a combination of so many of my favorite things; football, wrestling, silly Adam Sandler movies, Terry Crews, and Bill Finctner being a cop.

The low-key funniest part of this movie is Lambert, the guard that takes estrogen, and becomes incredibly sensitive, is played by Bill Romanowski. Bill Romanowski was a longtime NFL Linebacker who was known for being a complete asshole. He spit in people’s faces, was an obvious racist, beat the shit out of his teammates, and was fined hundreds of thousands of dollars for numerous unnecessary roughness penalties throughout his career. So it was funny to see the roid-raging asshole play a sensitive, caring man. It was quite a job of acting.

I unapologetically love this movie and will watch it anytime it’s on TV.

9 Cheeseburger Eddies out of 10