On Tuesday night, Wai Ting and I will do a bonus review of the “Tiger King” series on Netflix.

Leave us your feedback to the series and the show will be released Tuesday night for members of the POST Wrestling Cafe.

WHO IS THE BIGGEST VILLAIN IN THE SERIES?

With the rumor that another episode is coming out…do we not know enough by now about this cast of characters to recognize their greed and interests and assume anything beyond what we already know could be a potential work in that this is obviously lining their pockets which are likely running on E.

This is one of the most messed up shows I have ever seen and I couldn’t get enough of it. I loved Jerry Springer as a kid and this seemed to be the lives of the people on the show before they made it to Springer. I just want to listen to what you guys say about it but it’s pretty impressive that a transgender man gets his arm bit off by a tiger and it’s one of the least talked about moments of the show. I had to vote Carole as the biggest heel for the simple reason I love blaming everything now on that bitch Carole Baskin. Keep up the good work guys and glad you’re reviewing this train wreck during these crazy times.

While obviously dealing with serious issues and tragic events, this was simultaneously one of the most hilarious shows i’ve watched in a while. You could be forgiven for thinking it’s a mockumentary.

A few of my favourite things: 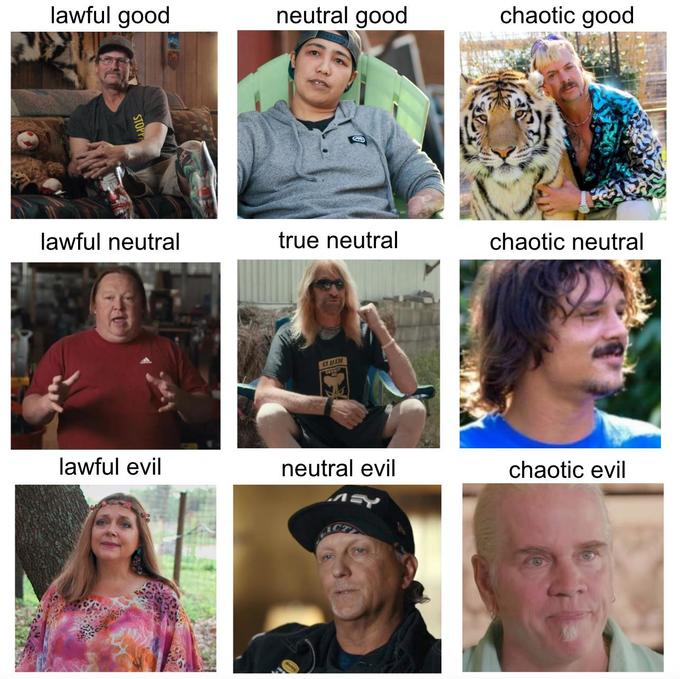 For me, the greatest villains in the series are all the people who keep wild animals as pets or in private zoos. The show missed a great opportunity to fully explain just how cruel it is to take tiger cubs from their mother right after birth to hand-rear. Even domestic house cat breeders don’t allow kittens to be sold or adopted until they’ve been properly weaned and taught basic behaviours by their mother.

To then exploit those cubs for endless paid photo ops is really horrible. And a few months later, you then have an animal that isn’t adjusted for any kind of content life in captivity, never mind the wild.

A final stray observation: I don’t understand why the show didn’t make it clear that Joe’s music wasn’t written or sung by him. It might seem like a small point, but it certainly adds yet another layer to the spectacle of Travis’s memorial service.

But I don’t mean to come across as a killjoy — believe me, I enjoyed the show thoroughly for what it was, which was “docutainment”.

I started a topic called WWE Films Tiger King dream cast before I found this thread. I should post my dream cast here as well.

For me, the strongest point of the series was how it portrayed the ways in which people can rationalize, normalize, and justify progressively irrational and self-destructive behavior. Obviously, countless books and psychological studies about the mentality of cult followers have been written, and we see a classic example of that in the woman who left Antle’s compound. But it was the people who’d literally sacrificed parts of their bodies to keep from rocking the boat at Exotic’s zoo who really broke my heart. An awful mix of poverty, placelessness, and lack of opportunity led these people to believe that these measures, which look horrific and delusional to outsiders like us, were in fact necessary in order to keep what little stability and security their lives at the zoo offered.

I cancelled my Netflix last year and reopened my account a few months ago, and Tiger King has made it so worthwhile. When TV shows tout having a colorful cast, most of the time I’m disappointed. Tiger King truly has an outrageous cast that stands out not only in physical appearance but in quality of character. Since the show came out I’ve seen it twice, and it’s one of those rare shows that improves in quality from a rewatch. This show was released at a perfect time, a time where we’re staying at home and watching shows more than ever. It’s hard to escape talks about Tiger King, whether it’s by coworkers, friends, or even your favorite pro wrestling podcast hosts. What was most harrowing to me was the very end of the show, where we were told there are more tigers in captivity in the United States than there are out in the wild. If anyone wants to hear more on the subject, the podcast Criminal put out an episode called Tiger (episode 46) that goes into another privately-owned tiger for viewing. Tiger King was transcendent, one of those shows that we’ll talk about for years and years. I can only hope that we get to see an interview with him after he’s seen the entirety of Tiger King, where he tries to explain everything one final time.

Question: which surprised you most while watching Tiger King: the fact that you can buy a tiger for $2,000 or that you can hire a hitman for $3,000?

Did I miss something, did the show not post?

Sorry, some miscommunication on our part. We recorded this late last night but I decided to schedule it for release at 6am to give space for John’s JR interview that was just posted Tuesday evening.