Allo, allo, allo! Davie Portman here requesting all of your feedback for tonight’s episode of NXT!

Not too much interesting tonight, so here are my thoughts on what actually interested me:

Question of the week: Who do you guys have for the Man, Woman, and Rivalry of the Year for NXT? I have Cole for the men, Shirai for the women, and Shirai vs LeRae for the rivalry.

I thought Xia Li’s English was pretty good tonight even though the kick and intense look were a bit over the top for me. I love her look and ring entrance, though. NXT’s Kitana.

Someone should have told Kassius Ohno that the camera was to his right.

Ripley owns the arena when she comes out. So does Shayna… Wow, I am loving this women’s division and NXT really does have the best women’s wrestling today.

Good to see Mauro back. Is it considered a pun if he says Mamamia during a Mia Yim match?

Kind of a pedestrian episode of NXT this week. I didn’t think Ripley and Kai would take place even though it wS advertised. At least Shayna sounded ferocious. With Kai making enemies quick, do uou give her muscle to back her up? That parking lot is dangerous.

Eva from London the Shayna Superfan with the Baszler random fact nobody asked for: Shayna’s favorite movie is the Empire Strikes Back, and won both the 2017 and 2019 NXT womens halloween battle royales dressed as Darth Vader 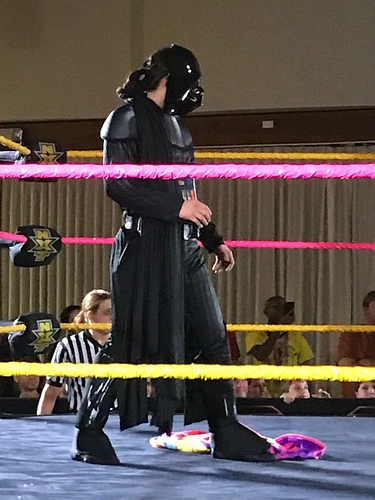 DNMXDKKV4AEVrA4900×1200 149 KB
Overall good show tonight, Mauro is back!
But I’ll focus on the womens scene tonight.
Li vs Baszler was a decent little match. Li’s kicks are very crisp. I was really looking forward to Kai vs Ripley so was not happy to see Yim get that thrown out. I was happy to see the horsewomen use teamwork to put the nightmare to sleep. Wont lie was pleasantly surprised that Baszler set up the title match and not Regal forcing her hand. I say who wins a tossup, though if Baszler wins it’ll be shenanigans. if ripley wins (who would be a worthy successor) Baszler’s likely to show up on Raw or Smackdown the week after.

Quote of the night: Kyle O’Reilly to Lee: what are you looking at my eyes are up here?

Keep up the good work brayden and Davie
Ps Tattooine has two suns not two moons! Yes im a nerd.

Felt like a lot of set up this week for the next 2 weeks which is a good use of the show.

Seems like December 18th is going to be a huge episode with at least 2 title matches on the show.

Hey I hope I’m not submitting this too late but I finally figured it out after watching a ton of The Office, I’ve casted Undisputed Era as the following characters:
Adam Cole - Michael Scott
Kyle O’Reilly - Dwight Schrute
Roderick Strong - Ryan Howard
Bobby Fish - Creed Bratton (cuz he’s old)
Follow me on the twitter @wrasslingram

Nas from NYC (not the rapper)

I thought this was a great show. Triple H is really going in for the kill with these ratings isn’t he? The next two weeks looks stacked and is genuinely must see TV for NXT.

Did you guys happen to catch the Lillian Garcia podcast with Tommy Ciampa? The whole interview was awesome. But I really loved how Ciampa put over Triple H as a genuinely great boss to work for. Makes me happy to know these guys are happy.

Side note: Ciampa said that he fought the ‘call up’ as he prefers the lighter NXT schedule because of his neck issues. This is only days after he jumped 20 foot off a cage through two tables.

Loved your review of the CWC.

I am pretty happy with the show and am excited for the triple threat match. I hope it ends with a spirit bomb but I assume Ciampa will win and face Adam Cole, Bay Bay.

Random question, I was eating hot wings and rubbed my eye… have you ever done anything stupid by accident?

Man - has to be Cole