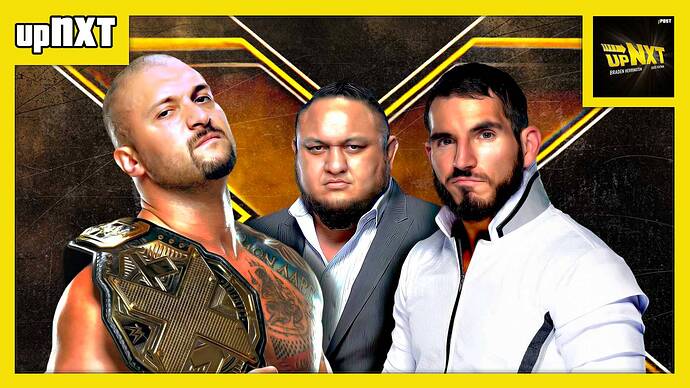 Braden Herrington and I will be going LIVE on Twitch at 10:15pm with our review of tonight’s NXT.

Or you can download the audio show by searching for “upNXT” wherever you find your podcasts!

MJ here with some hot takes that most upNXTperts will flame me for - it’s fine, I know people talk.

So Johnny is at the losing clean on TV in title matches point of his NXT run. He’s the best. He got a stellar match outa Kross and is never not going to be the heart of NXT. Kross felt like a champion against Gargano which is more than anyone’s gotten out of him so far. Not a big fan of the angle with Joe. I was kinda digging who will Joe feud with each week and I don’t see him winning the title.

After weeks of Johnny Gargano attacking Kross from behind and still getting beaten up. After weeks of Johnny attacking Kross with his buddy Theory and still getting beaten up. And after weeks of Johnny being made to look like a fool at every opportunity, we get a match. A 14-minute match in which Kross dumps Johnny on the edge of the table for some reason, spends half the time arguing with Joe, and then finishes the match by ragdolling Johnny with seven unanswered moves. NXT took their all-time best performer and turned him into a clown to progress a feud between their champ and the referee of the match.

I’m not saying the match was bad. Johnny is the GOAT of NXT; he can have a great 14-minute match with anybody. With a different story, I could have really enjoyed this. But as it was presented, it just pissed me off.

I don’t know who this NXT is for, but it’s not me. I’m out. Call me back when Cool Kyle is champ and Johnny is the Rebel Heart again.