FEEDBACK: upNXT TakeOver: In Your House

Braden and I are doing a LIVE WatchAlong on our YouTube Channel so join us during the show and immediately after for our Post Show!! 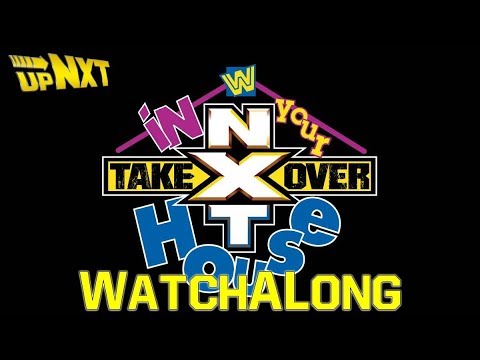 Braden Herrington and Davie Portman are back with a LIVE WatchAlong of NXT TakeOver: In Your House! The BDE are joined by Associate Producer/Social Media Man...

Solid start with the women. Glad Nox got the pinfall. Surprised at how good Balor/Priest was.

Speaking of surprised, Cole & Dream sucked ass & not in the good way. This & the Kross match Took the air out of the show, but you know who didn’t? KONA FUCKING REEVES on that phone I’ll show long probably marking out over the BDE. Let’s get this guy over.

Kona Fact: Kona does have a victory in 2020. January 10 he defeated Daniel Vidol.

Io Sharai gets all of us hi. Long time coming. Great watch along guys.

I thought this was mostly a good show, with the North American title match being absolutely stellar. I also really enjoyed the Finn Balor/Damien Priest match. Fun note: This was my girlfriend’s first time seeing Priest and she has never been more repulsed. That and I told her that he used to go by the name Punishment Martinez and she didn’t stop laughing for nearly the entire match. I thought the NXT title match would’ve worked better without the silly camera stuff. I loved the main event. Io is a maniac an I’m LIVING for it.

I love smart finishes and that is what the main event was for me tonight. Make Io the new champion look great, Charlotte stayed strong and would have won not for Io outa the sky, and Rhea takes a pin after both Io and Flair hit their biggest moves on her. Smart all the way around and a great match.

DIY are falling quickly into the jobbers to the “new” Stars role. It makes no sense to bring them together again but the tag division could use it. Or call ups now that everything is the same schedule.

Kross is a star.
Balor is on a real hot streak since his return to NXT. He’s beat Riddle, Draganuv, Gargano and Priest at TakeOvers. He’s gotta be in line for Cole who desperately needs a serious program after this heartless feud with Dream. Could Cole and Balor be on Summerslam proper?

NXT’s best showing in quite some time. Highlights for me were the backlot brawl and THAT main event. Whatta pleasant surprise by having Io Shirai go over. Only thing missing was the signature Takeover tag title match. 9 streamers out of 10.

Very fun show. Best parts for me was Shirai winning, and Balor/Priest. I hated the backlot brawl so much though. I legitimately had to go get an aspirin during it, it gave me a massive headache. Legitimately the worst match in Takeover history.

As an aside, I feel like ending with the women’s triple threat was definitely the way to go. Cole/Dream was really underwhelming. As for Charlotte and her future on NXT, she seems to be done if her tweets are any indication (embedding seems to be broken on my end):

Pretty bland show to me. The only decent characters atm are Lee, Lumis, and Shirai. Maybe it was because we were missing the banger tag match we’ve come to expect, but this show did nothing for me. Highlights of the show were Todd Pettengill, Lee clotheslining Gargano out of his shoes, and Shirai’s celebration. Unfortunately this show just reminded me why I haven’t been watching.

This was a nice takeover , first time that I’m not hype af and that after the show the only thing I want to do is go check Twitter to see how people are raving about the show . But even that said , I had a great time .
Quick notes ,

I thinks priest as a lot of potential , this was his best performance to date , I’m sure that they could do better things with Him if he wasn’t a vampire. Is offense was pretty quick and solid , look aT aleister , he just kills some dude that’s it . Drop the archer gimmick and I’m sure there’s something to do With him this guy is no baron Corbin

Kross and ciampa , wow at the started I was like are they gonna put Kross over quick , he was no selling shit . This was awsome their are really building and creating a huge New star with him , he as everything .i see they trust him a lot . I don’t understand what he’s doing in nxt . I would give Kross the Finn treatment on the main roster … goes to smack down , kills 3/4 of the roster , beat Braun period … New champ!

Was gargano Johnny deadpool ? I love the match it could have been better As there were a few slopy move , but is there something that gargano can’t do !? I really enjoy him As a heel !

And the women’s … wow ! This is the best women match of the year !

Definitely scarlet gets me wet !

And last thing , Kona tweeted back at bray d ! This is One hell of night for bray … io wins , kona replied … what else can happen tonight

Just watched the majority of the show, and I have to say I really liked it. Very good show especially considering there were no real fans.

I really liked JG vs Keith Lee and I think the right man won. Keith Lee is a future star, and its nice to see NXT really get behind him. Loved the spot where we watched Lee chop JG through the peep hole. Also pretty cool that he was able to wear BLM on the back of his tights, I dont think we see that 5 years ago.

Cole vs Dream was boring. There were parts of the match I was in to, but I felt the match just went too long, and there was just something missing. Its like they didnt want to do a real match, but they also didn’t want to do a cinematic match, so instead we got something in between that was just meh. Easliy the worst Adam Cole match I have ever seen at a Takeover, but to be fair that is a high bar.

I get what they were doing with Ciampa vs Kross, but I didnt like seeing Ciampa loose so easily, for me it takes away from the win. I think Kross would have come off better had the two had a longer and more entertaining match, though I get why they did what they did as they clearly want to present Kross as a monster. Is it me, or does anyone else find Scarlett lip syncing pretty lame?

Triple threat women’s match was really good. I was hoping Shirai would win as IMO she’s the best female in the business, and I was pumped to see her get the title. Too bad that moment wasn’t in front of a live crowd, would have just been that much better as I’m sure the crowd would have gone nuts. Hope Ripley is ok, she appeared to have gotten nailed by a knee during that finish.