What did you think of WWE Backlash?

Double Double, Iced Capp and Espresso patrons, join us for our live POST Show at this link.

I actually enjoyed the taped street profits/viking raiders segment, there’s room for brainless comedy as a palette cleanser, especially between drew/lashley and the main event

Thoroughly enjoyed the main event, wish the amped in sound was even louder, it didn’t distract at all. Randy and Edge were great, hope his injury isn’t severe. Really looking forward to another between drew and lashley

It was weird beyond that too. A crowd who seemingly can’t muster a chant, except to consistently cheer heels.Charles Robinson displaying a boxing referee. The Street Profits/Viking Raiders segment. Orton/Edge having video game-esque audio that sounded like a pantomime crowd.

I’ll be honest, I didnt find the main event overly compelling. It felt like a checklist of ingredients for a WWE formula match being executed well.

Who let Vince off his meds? What. Is. Happening?

I enjoyed the hell out of this show. Maybe it was the middle of the road expectations but I thought basically everything delivered. Silly tag line aside Orton and Edge had a hell of a match if you can don’t mind some of the production choices, which didn’t bother me but will probably bug some. Speaking of divisive moments, I personally was thoroughly sports entertained by the Street Profits/Viking Raiders match. It’s probably not what most people expected from War Machine when they first signed to WWE, but I’ll take it. The rest of the card was solid, even with some weak build for a couple of the stories going into the show

Joe from Niagara,
What’s up gentleman. I’m just going to comment on the Edge and Orton match, the rest of the card wasn’t the best in my opinion. However I really enjoyed that main event. Great story telling and great match all around. I was not really sold on the added crowed effects but I admit, it grew on me as the match went on and really added to the match. For having the pressure of putting on the “Greatest Match Ever”, I say they did a pretty good job. Do they have a rubber match now or is that it? Take care fellas

Drew beating Lashley the way he did was a neat way to continue the feud. Now Lashley can say he would’ve beat Drew if it wasn’t for his wife. It gives the feud a bit more substance, and I’m curious to see where it goes.

As for the main event, I liked it a lot more than the Mania match. Yes, it was a bit long, but it was far more eventful. What I really loved about this was the new camera angles. That was a really cool way of making a regular wrestling match different.

Unfortunately, it looks like we’ll have one more Edge vs Orton match, which I don’t care to see. There’s so many dream matches that fans want to see from Edge and it feels like he’s stuck with Orton.

Expectations weren’t terribly high, so I found the show to be decent. Glad Boss N Hug retained. Love the Aussie’s but Sasha N Bayley should have a lengthy run jumping on all three shows until they eventually lose the titles & feud. Asuka could have lost to Charlotte clean on Monday, Bobby could’ve lost clean to Drew & Nia Jax definitely could’ve lost clean to Asuka. Losing A match clean won’t kill your career. Too many messed up finishes lately. Main event was really good. Don’t need a stupid greatest match ever Tagline, just two world class performers. 6.

This show was back and forth for me. The lowlight was the mess with the Street Profits and the Viking Raiders. The only positive to come out of that was they didn’t have the Asian flute music when Tozawa made an appearance. Remember when War Machine weren’t geeks? Good times. The highlight of the night though was the greatest wrestling match ever. Poor Edge. His whole comeback has been cursed. Tonight, he went out and had an excellent match, but WWE did their WWE things with a dumb build and piped in crowd noise. Some of the camera angles were rough as well with getting underneath a lock up, but the piped in crowd noise was so hokey. The show is about a 6 out of 10 for me tonight.

Was the best of tonight the un-interrupted debut of the greatest music video of all time on the pre-show, HEY! HEY! HO! HO!?

I don’t know if this show had the greatest match ever, but it had one of the worst. Street Profits vs. Viking Raiders was a total waste of time. Can you imagine seeing War Machine in NJPW and thinking, “I really want to see those guys fight ninjas, eat turkey, and dive into a dumpster”?

I actually thought there were a lot of good things about the main event, but again it was just too much and way too long. If they had that same match in 25 minutes I think it could have actually been an all time classic.

A lot of the undercard was good so I can’t hate this show too much, but after MITB and a very solid takeover, this didn’t do it for me 6/10.

I’m hoping I just get this feedback ahead of you guys ending the show, but it was a decent show. Nothing earth-shattering happened or made me scratch my head at the result. I did like the McIntyre/Lashley match and thought it was the match of the night. I just couldn’t give Edge/Orton that nod as they had me dosing off at parts. 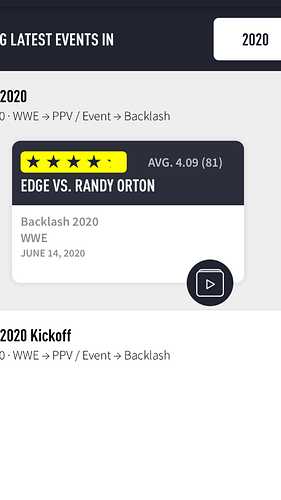