Patrons with video access can watch, chat and call-in to our live stream here: 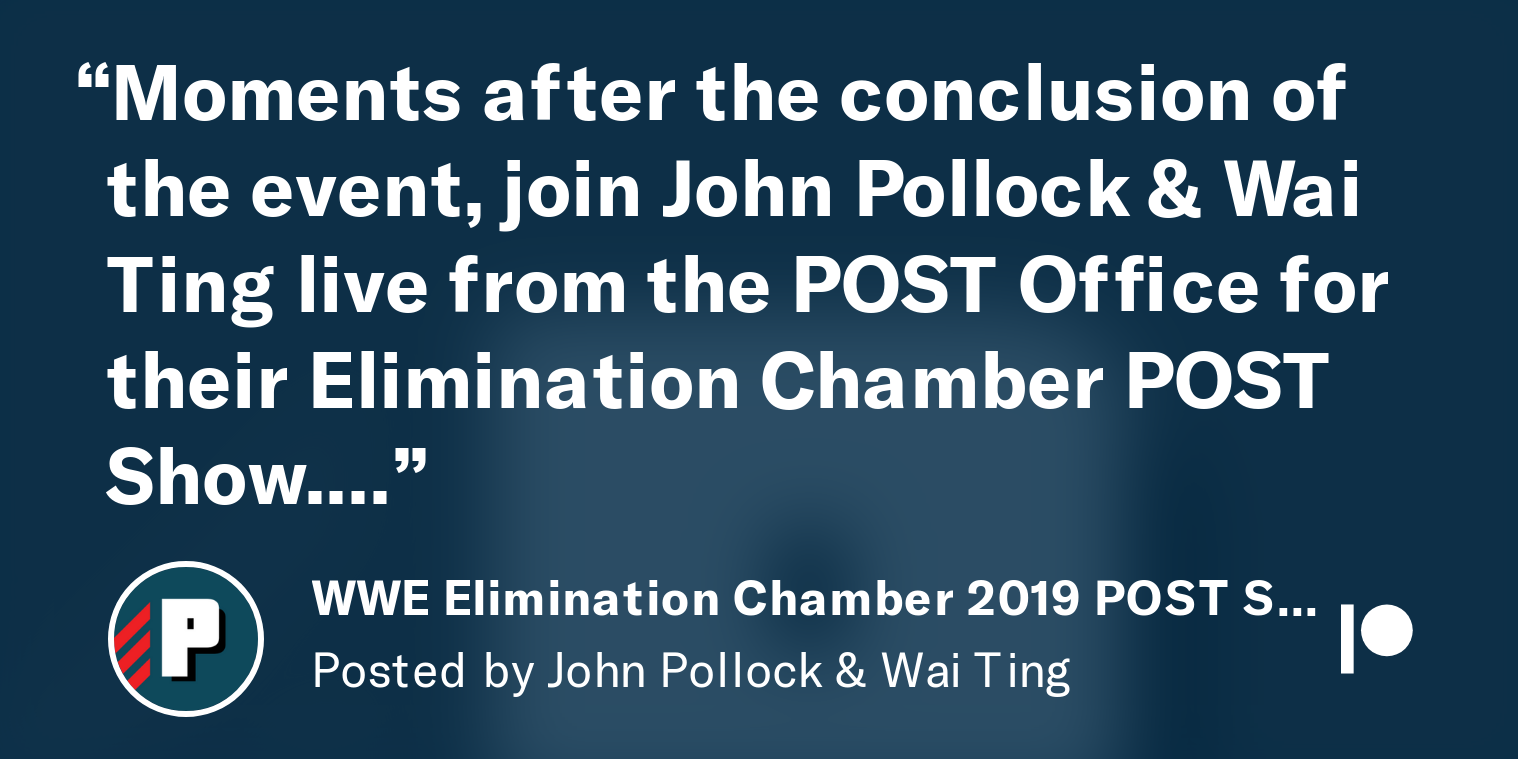 What did you think of Elimination Chamber?

This was my first WWE PPV after finally getting the network a few weeks ago. I think that the two chamber matches were decent, but the rest of the card was hit or miss. Jimmy Uso getting the pin following his arrest raised eyebrows and Balor pinning Rush was probably the most predictable finish of the show, other than perhaps the Ronda/Ruby match being worth absolutely nothing. The weakest part of the show was definitely the Baron Corbin screwjob finish and there is a good chance that “X-Pac Heat” will soon be known as “Corbin Heat.”

I’ll be honest. I thought tonight was just going to have me come to the forum, and make a bunch of Corey Graves jokes. But tonight, we probably saw the best Elimination Chamber match ever. I was skeptical before and felt that Kofi shouldn’t be in this because we all know how WWE will treat Kofi. I think tonight I feel slightly more optimistic of Kofi’s future, but I still don’t know. I think him winning the WWE Title at Wrestlemania might be the best outcome, and this could simply be the start of the story. Tonight may’ve been the beginning, and not the end. It was nothing like Corey’s marriage. I had to get one joke in. The matches were great tonight for the most part. The only negatives were the Strowman/Corbin match feeling a little slow and the Women’s Elimination Chamber match was sloppy at times, but I thought that match in general was ok. Sasha and Bayley against Sonya and Mandy may’ve been a better match by itself, all four of them were excellent. Overall, 17 out of 20 for me, with a lot of those points going to the Elimination Chamber main event.

The booking of the main event to come down to an extended Bryan vs. Kingston match was the right choice and hopefully this becomes a feud going forward. Best Elimimation Chamber match in some time.

The Women’s tag team elimination chamber match was also a lot better than i expected and the right team won.

However, give time that this show ended, there was no excuse for the Cruiserweight title match to have been relegated to the preshow especially given how awesome it was. Match of the night for me. Akira Tozawa has an tremendous ability to get the crowd into his matches.

And i thought Corbin vs. Strowman was the worst match of the show. I know there’s a lot of attention in WWE recently to who the company is now pushing, but the ending of the Corbin vs. Strowman match only confirms to me they’ve completely dropped the ball with Strowman.

Andrew from Saint John
The two Chamber matches were excellent, with the women’s tag better than I expected (with a nice callback to the sasha/bayley spot last year) and the main event match incredibly captivating, both in its early stages and during the Match Beyond with Kofi and Bryan putting together a thrilling final stage. In a week, they got Kofi to a point where I bit hard on the first Trouble in Paradise nearfall, which is wild to think about. A singles run has to be in the cards.

But the rest… Wasn’t great. I was happy to see Finn win, and Becky kicked some ass, even if I hate the way her story has been stopping and starting and I think they did Ruby Riot dirty. But not a lot had my interest on this show, especially not the excruciatingly-long Braun beatdown.

I thought overall, the show was great tonight.

Riott/Rousey was useless and I believe that they could’ve just done the women segment without the match even happening. Lynch came off looking like a star and the segment made me excited for the triple threat match at Wrestlemania (even though I would prefer a traditional singles match). Corbin/Strowman was the low-point of this show by a mile with them dragging the match out for a story that I don’t think anybody really cares about. WWE championship elimination chamber match was one of the best elimination chamber matches done so far with me literally jumping off my couch more than once at the idea of Kofi Kingston pulling off a miracle.

As far as pacing of the show goes, I feel like it would’ve worked out better to take out the Riott/Rousey match altogether and just do the segment, give Corbin/Strowman the time that the Raw Women’s Title match got and have the beat down occur afterwards, and add the Cruiserweight title match on the main show.

I had very low expectations for the show and I was tempted to skip it, but I feel like this ended up being one of my favorite WWE PPVs in a while. I will be the outlier for my high score for the show but I give it a 17/20.

Was not a fan of this overall.

Sasha and Bailey winning was predictable and match was terrible. As bad as I thought it would be.

Shane and Miz vs Usos was bad as well apart from a few spots.

Not sure what the point of the Corbin and IC title matches actually was other than to use the bathroom.

The Ronda match was pointless. Why is she even wrestling Riot? Just to make Riot look like a loser? The Becky beatdown was great but I feel like once Be my apologized she has lost some momentum.

The final chamber match was very good but I don’t fully get why the fans actually thought Kofi would win? Made no sense and although it was fun you knew Bryan was winning.

Overall one good match and segment doesn’t make this worth watching.

After his last 2 showings, I’m gonna be foolish and actually hope and believe that this Kofi stuff is gonna go somewhere. Kofi winning the title at Mania would be a great moment, and WWE can exclaim that he’s “made history” as the first black WWE Champion. I just hope everyone’s ready for the Bluniversal Championship that’ll be debuted the SD after Mania.
Rest of the show was very meh, but hopefully Sasha and Bayley can face Trish and Lita at Mania.